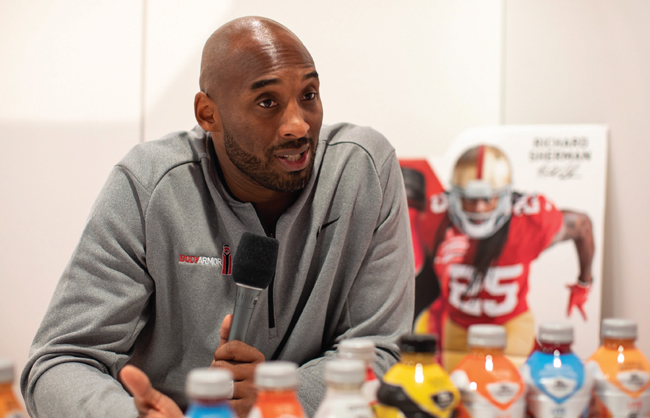 A few months back I was totally rapt, watching and attending my favorite sporting event, the U.S. Open. As a longtime tennis player and fan nothing beats the excitement, intensity and skill of the players. Having my favorite, Novak Djokovic, win was the icing on the cake.

During one of the matches, the commentators discussed the endorsement prowess of some of the players. I was startled to hear that Kei Nishikori of Japan makes over $40 million a year, more than both the eventual champ and anyone else not named Roger Federer. I kept revisiting that comment.

I thought back to my younger years, before my involvement in the beverage industry, and also the 26 years where it’s been my profession. I thought about some endorsers that have graced the screens and pages of the media over the years.

My first and fondest memory is of Yogi Berra, for YooHoo. Anyone who grew up in New York in the 50’s has his classic “It’s me he for YooHoo” etched in their minds. I remember Mickey Mantle, my idol, shilling for many brands. If Mickey drank it, so did I.

An ad that I will never forget is the one for Paul Masson Wines with Orson Welles. I was a big fan of Citizen Kane and his other films and couldn’t comprehend his agreeing to shill for a brand. I guess money talked, even back then. Even Sean Connery, at the height of his James Bond fame, found time to receive a paycheck from Jim Beam.

The entire Miller Lite campaign from the 70’s tickled my fancy, especially the Rodney Dangerfield and Bob Uecker ones, all effective and memorable.

I think my favorite campaign was “Got Milk” and the milk mustache. So many famous people were promoting a noble, beneficial product.

I cannot forget the Coke and Pepsi campaigns over the years. They set the bar for creativity and dollar expenditures. We could support entire nations’ living standards on the amount they spent to sell product. Some of the most memorable ones were Michael Jackson, including the footage of his hair on fire, and Britney Spears. I’ll always love the Mean Joe Greene ad as well.

Today’s endorsers have taken it to a new level, as investors and angels for the brands. Getting a piece of the action has sure paid off for Kobe Bryant, Justin Timberlake and the multitudes of others who put their faces and dollars into a brand’s success. Jessica Alba and Jennifer Aniston certainly qualify as beverage moguls.

I would be remiss if I didn’t mention Michael Jordan and his affiliation with Gatorade. He remains the epitome of a brand’s identity.

If you have others that you think are worthy of mention, or you’re just nostalgic, drop me an email.