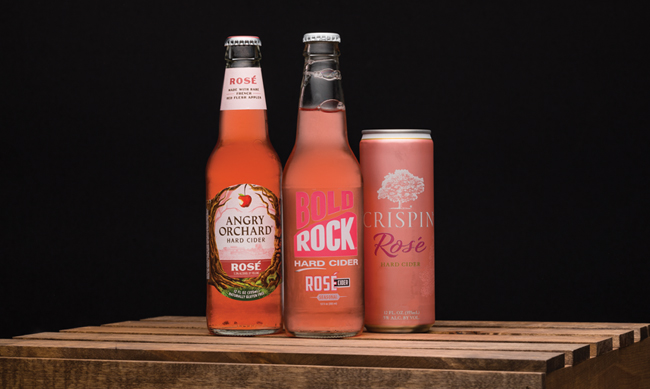 At the National Beer Wholesalers Association meeting in September, Nielsen vice president Danny Brager delivered a simple message to attendees who stopped by his early morning breakout session: Cider is back.

According to data from the firm, off-premise sales of hard cider were up 6 percent over the 52-week period ending on August 11. But if you look at the most recent 26-week period, also ending August 11, category-wide sales were up 13 percent.

That’s an accelerating revival for a segment that saw off-premise volume sales decline about 6 percent in 2017.

So what caused it?

Cider experts that spoke to BevNET Magazine all agreed that it has two causes: first, regional brands are finding success; second, there’s a crop of rosé flavored ciders have helped propel the entire category back to growth this year.

“The first and most important factor is that regional cider companies are driving this growth,” said Jeff Liebhardt, the senior vice president of sales and marketing at Bold Rock Hard Cider.

Bold Rock – which has production facilities in Nellysford, Virginia and Mills River, North Carolina, distributes to 10 states, and will sell about 75,000 barrels this year – grew off-premise dollar sales 37.8 percent through September 30, according to data from market research firm IRI.

According to Nielsen, sales for regional cider brands were up 29 percent through August 11. Those brands now represent 17 of the top 25 best-selling offerings in the U.S.

“Regional cider companies are trending much better than national brands,” Liebhardt said, noting that taprooms, event activations and an increasing number of sales reps putting cider in front of retailers are all factors that have contributed to growth this year as new drinkers have entered the category.

Sales of regional cider brands now represent 27 percent of the off-premise market, compared to just 8 percent four years ago, according to Nielsen. And regional cideries have captured 2.5 points of market share this year alone.

Meanwhile, regional cider brands are doing even better in restaurants and bars, making up about 43 percent of on-premise dollar sales, according to Nielsen CGA.

Newer players like Oregon-based 2 Towns Ciderhouse, which was launched in 2010, and Texas-based Austin Eastciders, which was founded in 2013, have grown off-premise dollar sales 50 percent and 76 percent, respectively. And even a stalwart brand like California-based Ace Premium Craft Cider, which opened in 1993, has grown off-premise dollar sales more than 38 percent this year, according to Nielsen.

Similarly, Bold Rock is also growing double-digits at the national level, and punching well above its weight class in its own backyard.

In Virginia, the company’s entire portfolio outsells offerings from popular in-state craft brewery Devils Backbone, which is owned by Anheuser-Busch InBev. It also outsells Blue Moon products, which are owned by MillerCoors, and Angry Orchard offerings, which are made by Boston Beer Company, in the state.

According to IRI, the Bold Rock brand family of brands racked up $12.6 million in dollar sales in Virginia through September 30, compared to $11.7 million for Devils Backbone and around $10 million for Angry Orchard.

It’s a similar story in North Carolina, where Angry Orchard is the only cider brand to outsell Bold Rock off-premise, according to IRI.

“We are going to continue to see craft take share from national brands,” Sam Dominy, the director of sales at Bold Rock told BevNET. “One-third of the category is not unrealistic to get to in 2019. We are taking share together, and growing the category by bringing a more sophisticated beer drinker into the cider space.”

That’s not to say that national brands, like Angry Orchard, aren’t also working to grow the category and attract other alcoholic beverage consumers.

“We’re finding that innovation is driving a lot of the growth, and that consumers are looking for something new and different,” said Caitlin Braam, Angry Orchard’s brand strategist. “This has given us an opportunity to pull in wine drinkers, and educate them about how cider can be light and refreshing but also complex and nuanced.”

The chance to connect with new drinkers is one of the reasons why Boston Beer Company purchased a sponsorship for the Angry Orchard brand at this year’s Kentucky Derby.

“I think consumers are searching for ways to be more connected with brands, and a lot of times that’s happening at an event,” Braam said.

Angry Orchard will often bring large wooden barrels filled with Spanish-inspired cider to events like the Kentucky Derby, and give consumers a chance to “catch” cider delivered directly from the barrel as part of what’s called the “over-the-head” or “long pour” method of serving.

“When people can feel like they are a part of something, it makes them believe in the brands and it provides a higher quality experience with cider,” Braam added.

Another reason why the category is growing again is the emergence of rosé-flavored products, which have not only cropped up in the cider space, but also in beer, hard seltzer and even vodka.

Nielsen counts 31 rosé-flavored ciders currently being sold in the U.S. Together, those brands generated more than $48 million of sales and accounted for 9.5 percent of total cider dollar sales during the 52-week period ending October 6, 2018.

The most widely distributed rosé offering in the cider category is Boston’s Angry Orchard Rosé, which has tallied more than $36 million in off-premise dollar sales through October 7, according to IRI. The brand was rolled out nationally in mid-February and carries a suggested retail price of $7.99 – $9.99, according to the company.

“There is a lot of growth coming from rosé, for everyone,” Braam said. “It’s helped broaden the category, and we are seeing opportunities to have rosé cider be served next to a rosé wine, for instance.”

Meanwhile, sales of Bold Rock’s rosé cider far exceeded initial projections and potentially cost the company some additional growth in 2018 since it was only sold as a seasonal product.

“We should have just launched it as a year-round, because we were projecting to sell 35,000 cases and we sold over 70,000,” Liebhardt said.

Despite the emergence of rosé, and the growth of regional brands, the cider category as a whole is still smaller than it was about three years ago. For the 52-week period ending August 11, 2015, off-premise cider sales eclipsed $531 million, according to Nielsen. For the same period this year, however, sales totaled $494 million.

Nevertheless, the category is 10 times larger than it was 10 years ago, and the number of U.S. cideries has swelled beyond 800.

But one big question for cider makers still remains: can it ever grow beyond two or three percent of overall beer category sales, something that some within the space have long-held as a possibility?

“If the cider category continues to grow double digits, while beer remains relatively flat, the math says that it could be doable,” Liebhardt contends.

Vermont Cider Company vice president of sales Terry Hopper told BevNET in 2014 that he believed the cider category, which at the time was about 1 percent of total beer sales, could grow to become 5 percent of the overall category.

“It’s a tidal wave that we’re all going to have to get used to,” he said at the time.

That wave is still a long ways offshore, but it is building momentum. Cider is now 1.6 percent of total beer, cider and flavored malt beverage sales, according to Nielsen.