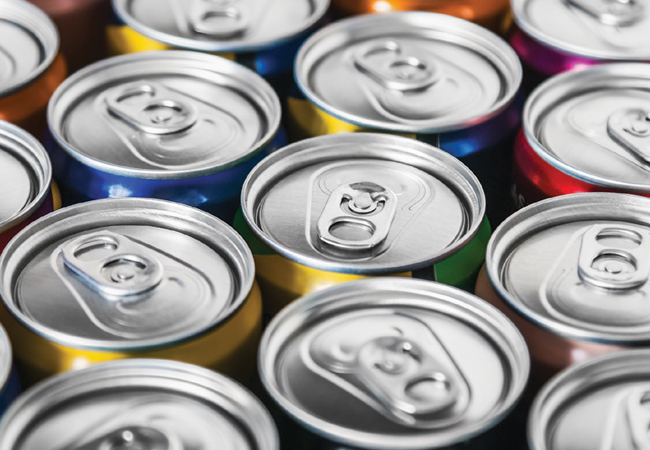 Aluminum Cans Sold Out for Another 2-3 Years, According to Credit Suisse

The aluminum can supply shortage plaguing breweries and other beverage producers could last another four years, according to a report by financial services firm Credit Suisse.

“The secular shift in the can industry is only in the early innings as it takes many years to optimize new plants, upgrade product mix, re-tool traditional lines, and reprice legacy contracts,” wrote Credit Suisse, which has added coverage of the U.S. packaging industry. “For the most part, the North American can industry is sold out for the next 24-36 months, and we don’t see the supply chain catching up to real demand until 2025-26.”

In its first analysis, the investment bank called its medium-term outlook of the industry is “bullish.” The can industry is being strained from several directions, as the COVID-19 pandemic’s restrictions on the on-premise channel have shifted a chunk of Americans’ beer consumption from draft to cans and new product introductions, including those in the $3.49 billion hard seltzer industry, also lean heavily toward cans.

Ball Corporation, the world’s largest manufacturer of aluminum cans, said its capacity falls short of demand by 10 billion cans. Even with recent investments in new plants and production lines, demand may not be met for several years or months.

“After experiencing stagnating growth for almost a decade, the North American aluminum can market has seen growth sharply accelerate at the same time significant substrate supply has been removed from the market owing to the closure of can sheet lines and capacity shift to automotive,” Credit Suisse wrote.

Virtually all major players in the hard seltzer segment package in 12 oz. slim cans, which Credit Suisse reports are sold out through 2023. The sleek cans would be even more popular if more were available, the firm added.

“Slim cans remain in shortage in the U.S. and major beverage companies would shift more legacy 12 oz. products into slim cans in the event such capacity existed,” the report said. 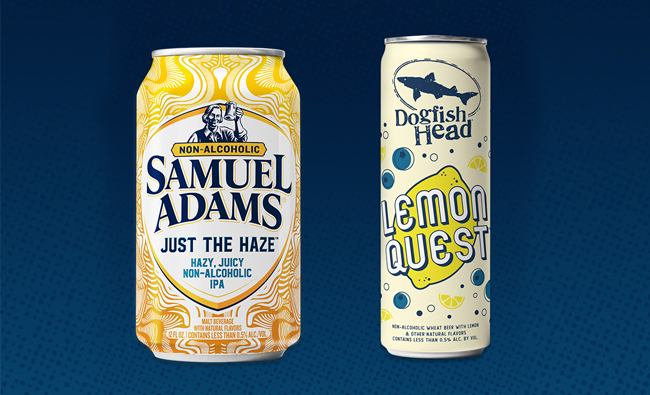 The strategy is clear: Boston Beer is aiming to be a major player in the non-alcoholic beer space, which through early September has increased off-premise sales 38.7%, to $124.9 million, in multi-outlet and convenience stores tracked by market research firm IRI.

According to Boston Beer, premium and sub-premium non-alc brands make up 70% of total cases and the top four non-alc brands hold 90% share of the segment.

So, in February, Boston Beer will launch the two non-alcoholic beer brands nationwide.

Samuel Adams Just the Haze checks in at less than 0.5% ABV and around 98 calories. Just the Haze will be sold in 6-packs of 12 oz. cans.

As for Dogfish Head’s offering, Lemon Quest is a wheat beer brewed with lemon purée, blueberry juice, açaí berries and sea salt. The beer also falls at less than 0.5% ABV and contains 93 calories per 12 oz. servicing. Lemon Quest will be sold in 6-packs of 12 oz. slim cans.

“Boston Beer is totally doubling down not just on the technique of embracing both de-alc and low-gravity ferment, but we’re doubling down by simultaneously releasing two very complimentary but very distinct versions of non-alcoholic beers,” Dogfish Head co-founder Sam Calagione said.

Calagione called the demographic potential for the beers “limitless.” He added that he sees the majority of the N/A beer volume in the future being incremental, coming from existing bev-alc consumers but also possibly active lifestyle consumers — the same ones who were attracted to Dogfish’s SeaQuench — who drink sports drinks such as Gatorade or even non-alc seltzer drinkers, such as La Croix.

Samuel Adams’ big innovation brands from two years ago — Sam ’76 ale-lager hybrid and New England IPA — are being rebranded as part of a new sub-brand, the Wicked line. New England IPA, will be rechristened Wicked Hazy, while Sam ’76 will become Wicked Easy.

The South Carolina production facility will be the third the company has built in the last two years in an effort to finally meet consumer demand.

“We are extremely excited to be in position to finally supply the market in full in 2021 and unleash our rich innovation agenda, which has been the backbone of our organization since Mike’s Hard Lemonade first launched back on April 1, 1999,” he said.

Those efforts combined should help fill the gap.

Construction on the nearly 1 million sq. ft. plant located in Columbia’s Pineview Industrial Park will “begin almost immediately” with the goal of being operational by summer 2021, according to the state of South Carolina. The new facility is expected to create 300 jobs.

Year-to-date through early October, the White Claw brand family has posted nearly $1.6 billion in off-premise sales, up 166.5% compared to the same period last year, according to market research firm IRI. 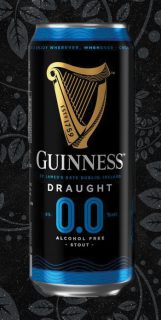 Diageo to Launch Zero Alcohol Guinness in UK, Test in US

An alcohol-free version of Guinness, called Guinness 0.0, launched in Great Britain and Ireland on October 26 — and the product will come to four markets in the United States in 2021.

In a conversation with Brewbound, Diageo Beer Co. president Nuno Teles said the non-alcoholic version of Guinness would pilot in four states, including Michigan, in 2021.

Teles, who launched his first non-alc beer around 2005, said non-alcoholic beer portfolio equates to “steady growth” but “not a spike.” That said, he believes non-alc beer could become as much as 5% of Guinness’ business in the future.

In addition to Guinness 0.0, Guinness Nitro Cold Brew Coffee (4% ABV) will receive a national launch in January in time to build toward activations and sampling around the St. Patrick’s Day holiday.

Another major brewer is teaming up with a non-alcoholic beverage maker to create a hard seltzer.

AriZona Sun Rise Hard Seltzer will be available in four flavors — Mucho Mango, Cherry Punch, Lemon and Grapefruit — and will be sold in variety 12-pack cans and 19.2 oz. single-serve cans (Mucho Mango and Cherry Punch). Each 11.5 oz. can checks in at 4.6% ABV and 100 calories.

“Together, we teamed up to both do what we do best,” he said. “We intend to broaden the appeal of hard seltzer by bringing more people to the party.”

“We’re excited to be working with AriZona to introduce the next evolution of hard seltzer,” Heineken USA SVP and chief marketing officer Jonnie Cahill added. “Most of the current hard seltzers on the market are clear, with similar flavor profiles, so we jointly saw an opportunity to add a splash of fruit to the category as we know consumers are looking for real ingredients and great taste.”

Cahill also touted the potential for AriZona Sun Rise Hard Seltzer to broaden the appeal of seltzer in the U.S.

“The current hard seltzers on the market have very similar positioning and we wanted to offer a range of tastes to appeal to a wide array of people,” Cahill said. 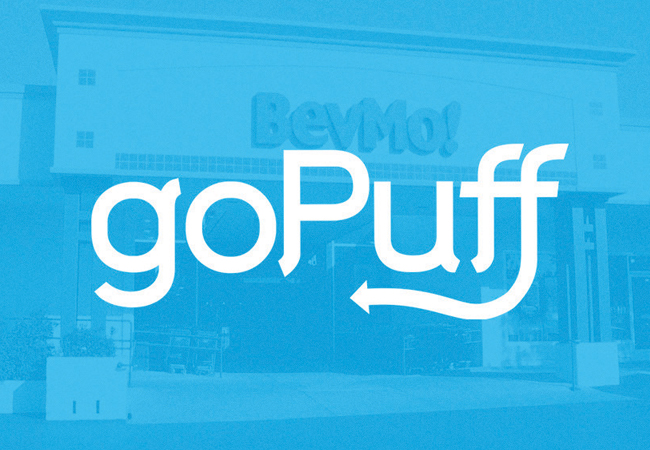 The transaction is expected to close before the end of 2020.

“We’re proud to bring goPuff’s operations to California and look forward to investing in talent and real estate across the state,” goPuff co-founder and co-CEO Rafael Ilishayev said in a press release. “Partnering with BevMo quickly advances our strategic objectives of providing more customers in new geographies with a seamless solution for their instant needs. Through this acquisition, goPuff will operate coast-to-coast, solidifying our presence as a leading, national consumer business.”

BevMo, which was backed by private equity firm TowerBrook Capital Partners, operates 161 stores in California, Arizona and Washington, which goPuff said will give the company the infrastructure “to seamlessly integrate into its network of local micro-fulfillment centers, enabling it to reach customers across the West Coast in 30-minutes or less.”

GoPuff, the e-commerce platform that serves as an on-demand convenience store, works through a distribution network of 200 “micro-fulfillment centers” that serve customers in more than 500 U.S. cities, many of which are concentrated in the eastern half of the country. The company said the deal will accelerate its entry into the California market, while providing millions of consumers access to alcoholic beverages, as well as everyday products via BevMo’s neighborhood stores.

In October, goPuff announced the completion of a $380 million funding round that takes the company’s valuation to $3.9 billion. The company was founded in 2013. 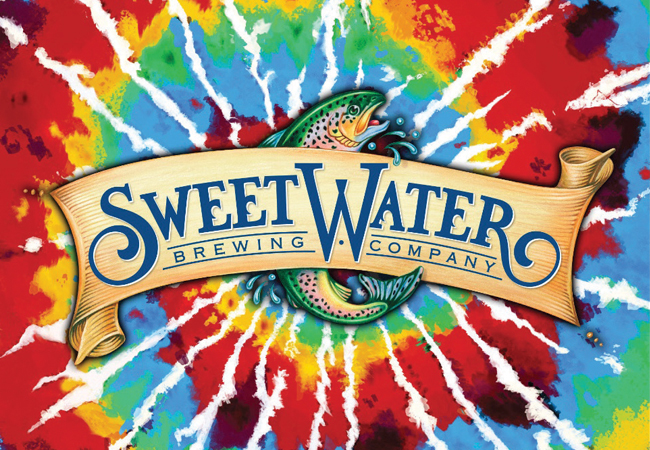 SweetWater will become a wholly owned subsidiary of Aphria, a publicly traded company on the NASDAQ that produces “pharmaceutical-grade medical cannabis.”

Shareholders of Sweetwater will receive $250 million in cash and about $50 million Aphria stock upon closing. Those shareholders are also eligible to receive as much as $66 million of additional cash under an earnout through the end of calendar year 2023.

Aphria, which was founded in 2013, said its board of directors unanimously approved the acquisition, which is expected to close by the end of December and be immediately accretive to EBITDA and diluted earnings per share.

In a press release announcing the transaction, Aphria pointed to SweetWater’s flagship 420 Pale Ale as aligning with the “cannabis lifestyle” and “provides a scalable platform for expansion into the U.S. and Canada.” This marks Aphria’s first foray into beverage alcohol and the U.S. market.

SweetWater was founded in 1997 by Freddy Bensch and Kevin McNerney. In 2014, the company sold a minority stake in the business to private equity firm TSG Consumer Partners.

SweetWater ranked as the 14th largest domestic craft brewer by volume in 2019, according to the Brewers Association. Sweetwater produced 261,00 barrels, an increase of 7% that year. The company generated net revenue of $66.6 million and adjusted EBITDA of $22.1 million in 2019.

The leader of the nation’s largest state organization representing craft brewers is retiring. Tom McCormick, the executive director of the California Craft Brewers Association (CCBA), announced his retirement from the organization in mid-November.

“The decision to retire is not at all sudden and has been thoughtfully planned with the CCBA board of directors for over a year,” McCormick told CCBA members in an update. “It is difficult to leave in these challenging times, but the efforts of this association to provide relief for our members will not cease. The board is finalizing the hire of a new executive director who will continue to lead the association forward into a new era.”

McCormick, a 40-year industry veteran became executive director of the CCBA in 2005. McCormick helped build the CCBA into a powerhouse with influence at the statehouse, achieving regulatory reforms while also beating back challenges to privileges afforded to the state’s brewers, including defeating attempts to impose strict franchise laws on the state’s craft brewers.

“The political dynamics among the alcohol beverage stakeholders in California has changed dramatically in the last decade,” McCormick said in a statement. “Over those years, the CCBA has become and will continue to be a strong and unified voice for our members at the state Capitol.”

The CCBA is expected to name McCormick’s successor in early December.