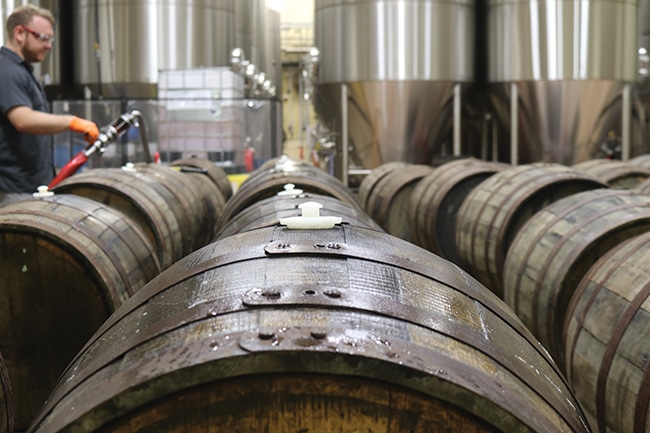 A month after the novel coronavirus forced the cancellation of the 2020 edition of the Craft Brewers Conference, the Brewers Association (BA) resurrected the craft brewing industry’s largest annual event through a month-long series of virtual presentations.

From April 13 through May 15, the trade group representing small and independent craft brewers hosted around 40 free presentations on a variety of educational topics, from equality and social justice, to the changes in laws being forced by COVID-19, to post-pandemic selling strategies in on-premise retailers.

Before the BA canceled the event on March 12, CBC,as well as the corresponding Brew Expo and the World Beer Cup competition, were slated to bring 13,000 attendees to San Antonio, Texas, from April 19-22.

Sorini discussed the emergency relief provided by alcoholic beverage control agencies to allow some small brewers to ship, deliver and sell beer-to-go, as well as permit restaurants and bars to sell beer and other alcoholic beverages with delivery and takeout orders. Nevertheless, Sorini acknowledged that these loosened restrictions are meant to be temporary, but they could be hard to pull back.

“We’re going to be in an era of the new normal for at least another year and at least until there’s a vaccine for this dreaded virus,” he said. “So when is this going to end? And when it does finally come to an end, it’s going to be very, very hard to put the genie back in the bottle.”

According to Watson, volume growth for BA-defined craft breweries held steady at nearly 4% in 2019, despite overall beer industry volume declining 2%.

“Obviously, 2019 stats may feel somewhat out of touch in a world where things have shifted rapidly,” Watson acknowledged. “But, I think publishing this data set will allow us a good foundation to understand some of the changes that we’re experiencing in 2020, and understand really where craft brewing was in a solid foundation at the end of 2019, as we begin to evaluate some of the changes that have occurred to the industry and society more broadly this year.”

Those numbers are likely to decline, as Nielsen CGA estimated that around 1.3 million barrels of BA-defined craft beer could be lost during April’s shutdown of U.S. on-premise outlets. Should those measures continue into May, an additional 1.5 million barrels could be lost, Watson estimated.

“Generally, I think we can expect that 25% to 30% drop [in craft sales] to be fairly consistent until the beer business returns to some normalcy,” he said.

In 2019, 8,275 craft breweries operated at some point during the year, which breaks down to:

• 2,058 microbreweries, which produce fewer than 15,000 barrels annually and produce packaged beer for distribution;

• 3,011 brewpubs, which produce beer primarily for consumption on their own premises and operate on-site restaurants;

• 2,966 taproom breweries, which produce beer for consumption on their own premises and package beer for to-go sales, but don’t have restaurants, and;

• 240 regional craft breweries, those producing between 15,000 and 6 million barrels of beer annually.

In 2019, 942 breweries opened their doors, while 294 closed. The number of closures was an expected uptick from recent years, as Watson had projected around 300 closures in 2019.

As the majority of states have shutdown on-premise sales in response to COVID-19, there is concern that thousands of craft breweries may shutter. Asked which breweries might be most at-risk of closing, Watson said the smallest breweries are the most at-risk due to relying on onsite sales and draft production.

Another number that is likely to fall in 2020 is the number of jobs, as many breweries have been forced to either layoff or furlough their workforces. Nevertheless, in 2019, craft breweries provided 161,007 direct jobs, an increase of 7% over 2018.