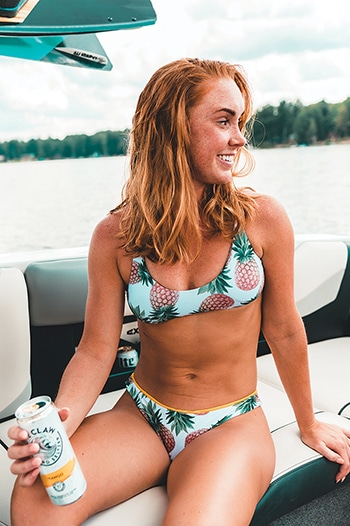 “People are surprised when they understand how big and how relevant [the FMB segment] is to consumers,” exsplains Mary Jo Hardy, AVP of Commercial Insights & Strategy for FIFCO USA, a brewing conglomerate based in New York. “It’s a very relevant segment, tons of momentum, tons of innovation, and excitement.”

Flavored malt beverages are considered beer products by the Alcohol and Tobacco Tax and Trade Bureau (TTB), but few consumers — or brewers, for that matter — would likely categorize them as such. Popularized by early brands like Zima and Smirnoff Ice, the category now encompasses brands like Twisted Tea, Mike’s Hard (and Mike’s Harder) Lemonade, and Four Loko. For now, hard seltzers make up a large chunk of the FMB space, but their astronomical boom in popularity has already led some data research firms like Nielsen to create a standalone category.

Hardy has watched FMBs evolve throughout her eleven year tenure at FIFCO USA, which counts flavored malt beverage brand Seagram’s Escapes as part of its portfolio. She claims there are two big reasons these malt-based alternatives to spirits, wine, and beer have persisted: continuously improving quality products and a new consumer base with a more open-minded affinity for sweeter flavors. “[Those] two things combined have created a really strong environment for flavored malt beverages to see really, really nice growth,” says Hardy.

Thanks to COVID-19, growth in all non-essential consumer segments has been threatened. But due at least in part to their long-standing reliance on off-premise sales, FMBs seem to be in a strong position to weather the pandemic. IRI data puts FMBs at a 52.2 percent increase in dollar sales from last year, with the top ten brands each exceeding $100 million in current sales as of March 2020. Nielsen also reports seeing off-premise sales increase by double digits from the same period in 2019, hitting $3.4 billion since March 9. Drizly, an ecommerce platform for the alcohol industry, calls the surge in demand “unprecedented”, with a spike in new users as high as 42 percent as opposed to the previous average of 15 percent. And despite a slight decrease over the past eight weeks (0.05 percent), Drizly’s head of consumer insights Liz Paquette says sales of FMBs on the platform stayed relatively consistent compared to the last 12 months.

Hardy anticipates this shift will stick for at least the near future. “I think off-premise, for the short term, is going to be really big,” she explains. “FMBs are in a good position.” She goes on to list strong repeat buying rates as well as the concept of responsibly treating oneself during this time of crisis. “This is really scary, and one of the main drivers of Seagram’s Escapes consumption, for example, is the need state of ‘I want to treat or reward myself.’.. and the low ABV is also an added benefit.” 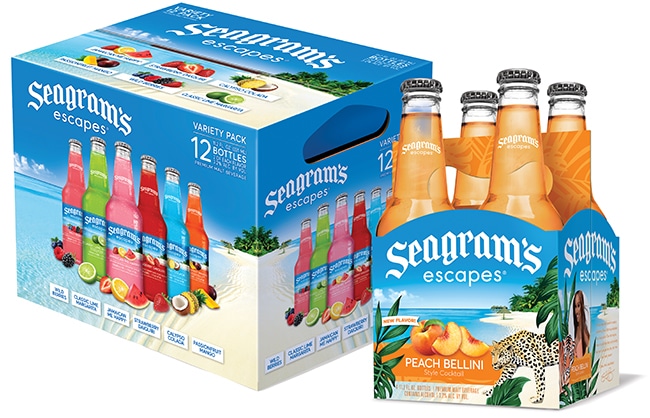 COVID-19 may have helped flavored malt beverages enjoy a wider resurgence, but it’s far from the only factor that’s kept this category alive. Last year, BevNET reported the segment has grown more than 13 percent since 2017. Goldman Sachs predicted FMBs’ share of the overall beer category would increase from 5 percent to over 11 percent by 2020. Hardy echoes this optimistic view, claiming FMBs have outpaced total beer growth over the last four years. Boston Beer CEO Dave Burwick told BevNET he foresees hard seltzer becoming a billion dollar business in the next year. The March 2020 NBWA Beer Purchasers’ Index places FMB/seltzers as the highest expanding segment in the entire category, with the next closest segment (imports) barely breaking even.

As seen in the craft beer space, this type of accelerated growth is unsustainable in the long-term. Nielsen’s vice president of beverage alcohol Danelle Kosmal told the drinks business she expects the initial spike of “consumer pantry-loading time” to evolve into the “new normal”, which will still likely outpace pre-COVID-19 projections. FMBs are also typically more popular in summer months, according to IRI, a claim confirmed by year-over-year sales. This seasonality stands to buoy the segment over the next few months as consumers continue to seek lighter alternatives to beer.

Still, as younger generations begin to hit drinking age, they continue to provide inevitable and widespread shifts in FMB demand. Men have historically dominated as the main craft beer consumer, but flavored malt beverages tend to be more gender neutral, according to Hardy. “It’s a really interesting segment, because to look at the data at the segment level for demographics, it would be a little bit misleading to say they skew female,” says Hardy, although she says overall the category does lean slightly more towards women as consumers. She uses examples like Mike’s Hard Lemonade or higher ABV products like Four Loko as the balance towards more male-oriented marketing.

The demographic breakdown within FMB consumers may shift more dramatically brand to brand than in other segments of the alcohol beverage industry. For instance, Seagram’s Escapes appeals to women in their mid-forties, according to Hardy, while most of the FMB segment tends to lean more in the 21-34 range. It’s that sweet spot between bubbly offerings like hard seltzer and traditionally male-skewing beer options that has historically been filled by wine or spirits. Now, innovative alternatives within the FMB space are competing for market share — and seem to be succeeding.

Despite the TTB’s categorization of flavored malt beverages as beer, FMBs consistent dependency on off-premise sales will likely shield them from the decimation faced by the craft beer industry. The Brewers Association chief economist Bart Watson gauges nearly half of craft beer’s volume comes from on-premise sales, leaving them poised for a cataclysmic fallout over the next few months. But perceptive brewers who previously diversified their output into the flavored malt beverage space — like Deschutes Brewery’s “Modified Theory” line of FMBs — may be able to supplant those lost on-premise sales with these additional products.

Hardy remains confident in FMBs’ ability to withstand COVID-19’s impact, shrugging off the perceived intrusion from canned cocktails as an interloper to the space. “I’ve not seen any data that would indicate there’s a change in consumer preference from a liquid standpoint,” she says. Jaisen Freeman, co-founder of Phusion Projects (the company who launched Four Loko Hemp in 2019) agrees the adjacent category will remain a compliment to FMBs, rather than a competitor. Rather, it’s the threat of an economic recession similar to 2008 that has Hardy feeling a little apprehensive.

“I think the economic recession that’s likely to happen is going to create some segment shifts within our total overall category. But I haven’t seen any signals of long term challenges to the FMB space,” claims Hardy. But even long-term, it’s hard to predict what the new on-premise landscape will look like. “Consumers are looking for either their state or city, or the country, having no new cases of COVID-19 before they’ll feel comfortable eating in a restaurant again. That’s a really high bar,” she says. “We have to understand how those occasions [will] change.” But as the world slowly but surely adjusts to the unknown future, it’s likely this resilient category will remain as solid as ever.