To paraphrase comedian Chris Rock, loyalty is only relative to what else is out there.

When framed against the backdrop of the protein and meal replacement category, there’s some truth in the joke. After comfortably dominating the segment on their own for decades, dairy-based and plant-based protein RTDs are now just two of a slew of beverage options for consumers, alongside smoothies, enhanced waters, kids drinks, shots and powders. The expansion of offerings indicates that protein drinks have transcended from the nutrition and fitness space into broader use occasions and audiences, a process that has also allowed enhanced versions of existing product types (think enhanced coffees, ultra-filtered dairy milk or even high-protein SKUs in existing lines) to further disrupt the traditional borders between categories. Elsewhere, the meal replacement segment has also been revitalized by new competitors eager to disrupt the market by leading with a digital-first approach.

As with other categories, protein and meal replacement drinks have grappled with the challenges of adapting to the COVID-19 pandemic, from taking on supply chain issues to the shift to future consumption occasions. According to SPINS data from the Natural Enhanced and Conventional channels, sales for both protein and meal replacement beverages grew 1.5% over the 52-week period ended on March 21, 2021. Within that mix, powdered products were up 4.7% to just over $1 billion, while growth in RTDs was relatively flat at just 0.5%.

A closer look at the data shows how the category is expanding and contracting across channels and positioning. The exploding plant-based food segment — up 27% to $7 billion in 2020, according to data from the Plant Based Food Association and the Good Food Institute — is also driving growth in the protein and meal replacement category, with sales of plant-based products increasing 4.6% to $363.2 million through March 21, according to SPINS; dairy-based drinks, meanwhile, fell 0.2% during the period.

Yet in natural retail alone, the RTD protein and meal replacement category has slipped over 16% to around $14.2 million, while in conventional stores, liquid products grew by just half a percentage point. Instead, the biggest increase came from regional and independent grocery stores, which saw RTDs grow 9.4% to over $172 million in sales.

Outside of the traditionally defined category, beverages that feature protein as a value-add were broadly down over the last year. The largest sub-segment of protein-added beverages, refrigerated juice drinks, was down 19% to around $125 million in sales, while the next closest, shelf stable coffee, fell 1% to $11 million. Elsewhere, shelf-stable enhanced waters dropped by over 50%, offset by triple-digit gains in shelf-stable tea and refrigerated coffee.

Growth is also different on either side of the refrigerated divide: according to IRI data through April 27, 2021, dollar sales for shelf-stable protein drinks (under the umbrella of “weight control”) were up 4%, in contrast to a 8.6% decline in cold-chain items. In the former, dairy-based Premier Protein, operating within the portfolio of BellRing Brands with Post Holdings as an investor, reported a 9.3% increase in sales ($549 million), while Muscle Milk (PepsiCo) lost ground and CORE Power (Coca-Cola) made gains. Fast-growing refrigerated brands like Koia and REBBL also posted solid growth during the period, but the strong turnaround for Bolthouse Farms’ protein drinks — its Protein Plus products were up 7.5%, while its Keto line soared over 2000% — were bright spots amid the overall decrease. 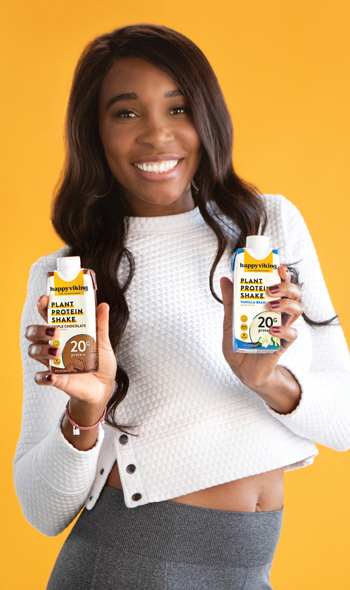 For plant-based protein, allergen-friendly brand OWYN (Only What You Need), growth hasn’t just been about adding more flavors and SKUs. The company already offers five different varieties of RTDs featuring 20 grams of protein per 12 oz. bottle, as well meal replacement drinks and the newly introduced higher-protein (35 grams), zero-sugar Pro Elite line. Last year’s introduction of TetraPaks (both singles and multipacks) has not only helped the brand build its presence at key retailers like Target, CVS and 7-Eleven — with dry-shelf multi-packs helping to offset dips in immediate consumption traffic — but also deepen its credentials as a primarily RTD protein brand that can serve multiple need states and consumer types.

“The good part about our category for where we are going, from a retail standpoint, is that active nutrition and performance nutrition live together on the same shelf,” said Mark Olivieri, president of OWYN. “We’ve been able to create a destination on shelf, and that’s what we are working towards to have both the 20 gram line and Pro Elite side-by-side — differentiated positioning, differentiated target occasions and demand spaces, but at the end of the day still living together.”

OWYN’s shift into TetraPaks, the category’s most prevalent packaging type, is also a significant move relative to the competitive set. Earlier this spring, PepsiCo introduced a reformulated version of its plant-based protein line, Evolve, in TetraPaks, arriving shortly after the launch of another dairy-free product — Happy Viking, developed by tennis star Venus Williams — in December. Meanwhile, coconut-based protein line Aloha’s recent move in the other direction, now offering single-serve PET bottles alongside TetraPak multi-packs, shows that retailers are eager to find pragmatic solutions to fill gaps in their protein sets.

“As we continue to focus on innovation within the same set in store, we are expanding our facings, which in turns drives brand visibility and awareness and ultimately leads to trial,” Olivieri said. “Instead of having three TetraPaks on shelf, we are going to have five to six TetraPaks on the shelf. That visibility adds a total halo lift to the brand.”

As the category has developed, some brands have built their identities on either side of the plant-based divide: names like OWYN, Vega, Koia, Evolve and Orgain are focused on non-dairy, while ICONIC Protein, which last year reformulated its products to remove added sugars, and legacy brands like Muscle Milk and Premier Protein are still innovating around whey protein. But others have found that their brand equity can either extend across both segments (as with Protein2o’s expansion from whey into plant-based options), or that other unique attributes and considerations can have a bigger influence. Global demand for animal-derived collagen (either bovine or marine-based) is set to reach $6 billion by 2026, according to Global Market Insights, helping lift collagen-centric brands like Vital Proteins (acquired by Nestle last June) and boost innovation in creamers for the likes of Picnik and Super Coffee.

Shifting focus to meal replacement drinks, Olivieri said that OWYN’s two-SKU line requires a higher degree of “incubation and nurturing” before it can make the move into brick-and-mortar retail, as a “strong brand story” is needed in order to compete with the established category players like Atkins and Slim Fast. But the Soylent model of building a buzz online before making the transition offline has opened the door for brands to take divergent paths towards building their respective audiences.

Launched in February on Amazon with backing from incubator L.A. Libations, orro, positioned as an on-the-go “mini-meal” replacement drink, is taking a slow and deliberate approach towards selecting retail partners. For other brands with a more specific demographic or use occasions, the path can be more defined. CTRL, which debuted in October 2019 as a powder-based meal replacement aimed at gamers, marked its first step into brick-and-mortar retail by launching three of its SKUs — Cinnamon Toast, Fruity Flakes and Cocoa Crunch — at Vitamin Shoppe in March. The brand and retailer will also collaborate on a campaign to highlight “the importance of healthy dieting and nutrition in gaming and esports.” Elsewhere, Don’t Quit!, another meal replacement venture backed by L.A. Libations and distributed by Keurig Dr Pepper, has rolled out to chains including Safeway, Kroger, Sprouts and CVS.

“This is a marathon, not a race for us,” Olivieri said. “At the right time, when we feel like we have that loyal following where we have enough customers where we are confident about going to retail, we will. We are trying to be as thoughtful as we can. We want to make sure it can stand on its own with healthy P&L before going into that space.”