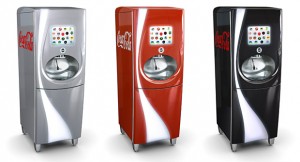 LORTON, Va., Sep 30, 2011 (BUSINESS WIRE) — Custom-made burgers, meet custom-made drinks. Your search for a tailor-made dining experience is finally over as Five Guys(R) becomes the largest restaurant chain to endorse the installation of Coca-Cola Freestyle(R) for its entire system.

Next month, Five Guys will begin installing two Coca-Cola Freestyle fountains in all company-owned restaurant locations across the country. Guests at Five Guys will be able to enjoy more than 100 drink options and a unique, high-quality beverage experience along with America’s “best burger”, as voted two years in a row in the Zagat(R) Fast-Food Survey.

Five Guys began testing Coca-Cola Freestyle in the Atlanta market in 2010 and expanded their testing across multiple markets during 2011. During the test phase, restaurants have experienced sales and traffic increases, as well as significant growth in beverage purchases, solidifying the decision to expand Coca-Cola Freestyle across the Five Guys system.

“The interactivity, innovation, choice and quality that Coca-Cola Freestyle delivers to our customers is the perfect pairing with our burgers and fries,” said Sam Chamberlain, Chief Operating Officer, Five Guys. “Adding Coca-Cola Freestyle to the mix further enhances the made-to-order dining experience our customers expect and enjoy when they visit Five Guys. We’re excited to be the biggest franchise system to roll out the fountains in our stores, and look forward to growing our business with Coca-Cola as our partner.”

The new fountain dispenser offers more than 100 sparkling and still beverage brands from a single freestanding unit. Sleek and stylish, the unit is touch-screen operated and serves regular and low-calorie beverage brands, flavored waters, sports drinks, lemonades and other options, many exclusive to Coca-Cola Freestyle. An ideal complement to Five Guys’ high-quality, custom-made burgers, Coca-Cola Freestyle allows people to choose from endless possibilities, many never before marketed in the U.S., including brands such as caffeine-free Diet Coke(R) with Lime, Fanta(R) Peach, Minute Maid(R) Light Orange Lemonade and more.

The family owned Five Guys restaurant group has served award winning burgers and fries for over 25 years. There are now over 875 restaurants open across US and Canada, with over 1600 additional units in development. This two decade pursuit of perfection has resulted in critical acclaim from the media. The Philadelphia Magazine, the Charlotte Creative Loafing, the Richmond Magazine, the Washington Post and many others voted Five Guys #1 burger in their respective towns. In addition ZAGAT Survey said “there are no better” burgers and has included Five Guys in their annual ratings since 2001.

The Coca-Cola Company is the world’s largest beverage company, refreshing consumers with more than 500 sparkling and still brands. Led by Coca-Cola, the world’s most valuable brand, the Company’s portfolio features 15 billion dollar brands including Diet Coke, Fanta, Sprite, Coca-Cola Zero, vitaminwater, Powerade, Minute Maid, Simply and Georgia. Globally, we are the No. 1 provider of sparkling beverages, juices and juice drinks and ready-to-drink teas and coffees. Through the world’s largest beverage distribution system, consumers in more than 200 countries enjoy the Company’s beverages at a rate of 1.7 billion servings a day. With an enduring commitment to building sustainable communities, our Company is focused on initiatives that reduce our environmental footprint, support active, healthy living, create a safe, inclusive work environment for our associates and enhance the economic development of the communities where we operate. For more information about our Company, please visit our website at www.thecoca-colacompany.com .