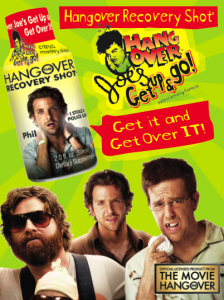 “This is a perfect marriage of pop culture entertainment branding and a contemporary health product,” explained Jaynes. “This agreement opens endless opportunities to market and promote our shot.”

Hangover Joe’s Get Up & Go™ is a scientifically formulated 2-ounce shot that combines caffeine (about as much as one cup of coffee), select amino acids, antioxidants, B vitamins and herbs specially engineered for maximum hangover relief results. It is currently available nationwide in various markets.

The Hangover recovery shots will be sold featuring the image of one of the film’s cast on each bottle. The Limited Edition shots will showcase Alan, Phil, Stu, Doug, Mr. Chow and even the tiger for movie memorabilia collectors as well as anyone suffering the effects of alcohol overconsumption. They will be available in retail at the end of August/early September.

Consumer satisfaction and word of mouth have been a key reason and the driving force behind Hangover Joe’s success. The great thing about Hangover Joe’s is that it really works! Our recovery shot aids the body’s by helping you recover form a hangover by restoring your body with the essential antioxidant and supplements need to relief a hangover.

Warner Bros. Consumer Products, a Warner Bros. Entertainment Company, is one of the leading licensing and retail merchandising organizations in the world.