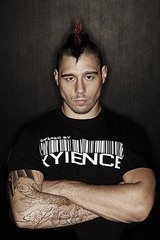 LAS VEGAS (September 8, 2011)— XYIENCE, maker of XYIENCE supplements and Xenergy, the official energy drink of the UFC, announces that XYIENCE team athlete Dan “The Outlaw” Hardy, who fights in the UFC’s welterweight division, will be appearing at XYIENCE’s booth #1214 at the 2011 Olympia Expo on Friday, Sept. 16, and Saturday, Sept. 17. Hardy will sign autographs from 1 to 3 p.m. both days. XYIENCE spokesmodel Amber Nichole, a former UFC octagon girl, will also be at the XYIENCE booth.

Olympia Expo is the world’s largest fitness expo and convention that takes place at the Las Vegas Convention Center. It is a part of the 2011 Olympia Weekend Sept. 15-18, and includes a variety of special events.

“As an professional athlete and former personal trainer, being a part of 2011 Olympia Weekend is really exciting because training and nutrition are a huge part of my life,” says Hardy, who recently relocated to Las Vegas and has been fighting in the UFC since 2008. “I’m looking forward to meeting all the MMA fans at the event.”

Along with the excitement, XYIENCE Xenergy is a nominee for Energy Drink of the Year in BodyBuilding.com’s 2011 Supplement Awards. The winner will be announced on Friday, Sept. 16, at the expo.