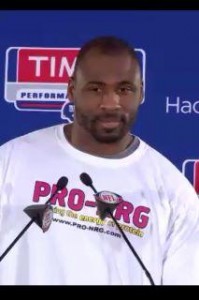 Woodbridge NJ (PRWEB) April 04, 2012 – The sports news world is still abuzz over Brandon Jacobs unexpected move from the New York Giants to the San Francisco 49ers. ESPN was the first to report on the breaking news of Jacobs’ one year deal, which was signed last week after the impressive running back decided against the Giants’ negotiations after a deal could not be reached. Jacobs’ surprising move made him the second reigning NFL champ to sign with the Niners last month. News sources and sports fans alike are speculating on San Francisco’s recent bid for Super Bowl stardom with their strengthened lineup, but for Jacobs it’s just part and parcel of an even bigger story.

Nicknamed the Juggernaut for his overpowering force on the field, this celebrity football player is known for his ability to break tackle after tackle in his determined drive for total domination. Jacobs recently unleashed this unbridled energy with his first foray into the billion dollar beverage industry. Since the success of this year’s Super Bowl, convenience stores in the New York Tri-State area have featured the water-based, protein-rich sports drink PRO-NRG. And now, with Jacobs’ move to the West Coast, this athlete turned entrepreneur is leading the push for national distribution.

Like most Americans, Jacobs is no stranger to the overflowing shelves of energy and sports drinks on the market today. However, at 6’4” and 275 pounds, his large stature has always overwhelmed the promises of energy packaged in a convenient shot — that is until the first cases of PRO-NRG were delivered to his door the night before heading to Indianapolis for Super Bowl XLVI.

“Energy drinks never really hit me, but PRO-NRG helps me keep my endurance for hours,” says Brandon Jacobs, co-founder of the all-natural sports drink. “It’s different than other energy drinks. It doesn’t have caffeine or sugar, which makes it a healthy alternative in preparing for practice. It helps me make it through the day.”

And Jacobs knows first-hand what it takes to make it through a grueling day of play by plays on a football field. With two Super Bowl (XLII and XLVI) rings, garnered during his seven year stint with the New York Giants, Jacobs recently ran with the opportunity to sign with the San Francisco 49ers in yet another attempt at Super Bowl stardom.

In any case, the future is looking bright for this outgoing athlete. In recent months, Jacobs and PRO-NRG have been featured in Men’s Health and haven taken the lead in sporting news with appearances on NBC Sports Talk, Eyewitness News, and MyFoxNY.com. PRO-NRG has already been a hit in convenience stores throughout the Tri-State area on the East Coast.

As the official launch of PRO-NRG ramps up, Jacobs encourages sport enthusiasts and weekend warriors alike to sample the energy of hydration though the protein drink and its specially formulated, all-natural blend. “It can help you get that extra yard too.”

PRO-NRG Hydrating Protein Water Beverage combines 15 grams of whey protein, essential vitamins, and healthy herbal extracts to create a powerful and wholesome recovery drink for those in need of a long-lasting, hydrating energy boost. PRO-NRG offers the satisfaction of instant energy without the unenviable crash often experienced after consuming traditional energy shots. The four-ounce recovery beverage currently comes in two flavors – berry and citrus – and can be ordered online at http://www.pro-nrg.com.