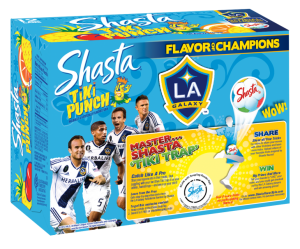 CARSON, Calif. (Monday, May 21, 2012) – The LA Galaxy announced today that the club has reached a new and exclusive partnership with Shasta Beverages, Inc., with Shasta® kicking off the relationship as the club’s official soft drink. One of the most iconic flavored soft drink brands in Southern California, Shasta, with their more than 30 delicious flavors, has been a family-trusted favorite for over 123 years.

“Shasta is excited to partner with the world-renowned LA Galaxy for the 2012 season,” said Abbey Glaser, Director of Brand Management at Shasta Beverages, Inc. “Our Flavor of Champions promotion, together with the Galaxy’s community outreach initiatives, will bring the fun and flavor of freestyle tricks to both our most loyal and newest fans.”

Shasta is the title sponsor for the Galaxy’s soccer-tricks team, the Galaxy Futboleros, and will be featured at all Galaxy home games and various events.  The Galaxy Futboleros, ‘Flavored by Shasta’, will be outfitted in boldly-colored uniforms that correspond to delicious Shasta flavors and will take part in a series of in-game and halftime promotions.

The Galaxy Futboleros have also created a series of unique and skillful tricks that were inspired by five of the most popular Shasta flavors. Videos illustrating the Cola Kick Trick, Orange Flip Lift, Body Twist, Zazz Cabeza and Tiki Trap can be found online at www.shastaflavorstyle.com.

The partnership also includes a comprehensive, multi-channel digital initiative for Shasta that will be communicated online, at the stadium and at sampling events, as well through Shasta packaging and in-store Shasta displays. The digital campaign features an original Facebook application, Shasta-branded mobile ‘SnapTags’, and FlavorStyle Trick videos performed by the Galaxy Futboleros. The Facebook application will allow fans to upload videos of themselves performing their favorite FlavorStyle soccer tricks. Monthly winners will be chosen by Galaxy players to receive a variety of Galaxy and Shasta prizes. Winners will also have their videos displayed online and on the DiamondVision jumbo screen at Galaxy home games. At the end of the season, the Galaxy Futboleros will select one of the monthly winners as a grand-prize winner to receive $1,000 and a six-month supply of Shasta.

“We are excited to partner with a creative company like Shasta and to be a part of an innovative retail program that includes the Galaxy brand on Shasta packaging throughout Southern California grocer outlets,” said Bill Pedigo, Senior Vice President of AEG Global Partnerships.

Mobile SnapTags, powered by Spyderlynk, will appear on select packages of Shasta along with featured Galaxy players and the Galaxy logo. Consumers can scan each of five different Shasta SnapTags to instantly view fun soccer trick videos performed by the Futboleros on their mobile devices. Shasta SnapTags are uniquely branded and accessible to anyone with a camera phone and encourage users to LIKE Shasta on Facebook.

The Galaxy are back in action on Wednesday, May 23 when they take on the San Jose Earthquakes at The Home Depot Center. That game kicks off at 7:30 p.m. (PT) and can be seen live in English on KDOC and in Spanish on KWHY. For more information about this game or to purchase tickets to any Galaxy home game, please visit the club’s official website at www.lagalaxy.com.

Since its founding in 1889, Shasta has been a beverage industry pioneer and family-trusted staple in America, with over 30 unique, innovative and distinctive soft-drink flavors. Shasta has a flavor for everyone from innovative and distinctive soft-drink flavors ranging from new California Dreamin’ and Fiesta Punch to such familiar favorites as Crème Soda and Root Beer.  For more information, please visit www.shastapop.com, or Shasta Soda on Facebook and Twitter.

Shasta is part of the National Beverage Corp. (NASDAQ:FIZZ) family of iconic brands. National Beverage is highly innovative as a pace-setter in the changing soft-drink industry, featuring refreshment products that are geared toward the lifestyle/health-conscious consumer.  Shasta® – Faygo® – Everfresh® and LaCroix® are aligned with Rip It® energy products to make National Beverage . . . America’s Flavor•Favorite – soft-drink company.  Visit www.nationalbeverage.com.

SpyderLynk is a mobile activation and marketing platform company. SnapTags, Social SnapTags and Buy-it-Now SnapTags are SpyderLynk’s proprietary 2D Mobile Barcode solutions enabling marketers to use meaningful logos and icons as interactive marketing tools. Consumers with smart or standard camera phones can use SnapTags placed on packaging, advertising, signage or screens. A smart, algorithm-driven platform powers campaigns ranging from simple to sophisticated accelerating purchase cycles and driving marketing results. Brands such as Coke Zero, Revlon, L’Oreal, MillerCoors, Warner Brothers, Toyota, Bud Light and others are using SnapTags to activate best in class marketing, accelerate their social connections and enable mobile commerce. Based in Denver, Colorado, SpyderLynk was founded in 2006 and can be found online at www.spyderlynk.com. Follow us on Facebook, Twitter and through the #SnapTag hashtag.