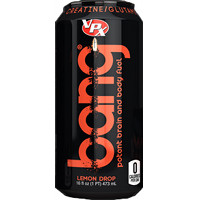 Weston, FL, November 14th, 2012 – With a BANG, VPX Sports introduces a new extension to the carbonated energy beverage category.  BANG® is a refreshing, great tasting beverage that is a first of its kind and expected to attract interest from consumers and industry alike.

VPX has thrived upon its reputation to create cutting-edge, science-backed and value-added products that consistently exceed consumer expectations.  As you would expect BANG® is at the forefront of VPX innovation by introducing a patent-pending novel water stable Covalently Bonded Creatine/Glutamine Peptide , Caffeine, BCAA’s (Branched Chain Amino Acids) and a patented encapsulated CoQ10 that dissolves clearer and is more stable than other commercially available CoQ10. For this reason, Jack Owoc describes BANG as the “first hybrid energy/sports nutrition beverage” designed to increase ATP (the the body’s energy ‘currency’) without carbs or other macro nutrients like sugar. All of the High fructose Corn Syrup (HFCS) and high sugar content energy drinks are harmful for health and actually zap your body of energy by causing the body to over-express insulin. This contributes to the American pandemic of obesity and other related diseases.”

Current commercially available beverages that claim “energy” are more often than not associated with immediate effects, use high levels of sugar and of which can lead to symptoms of “crash.”   BANG® incorporates Creatine, Glutamine and other amino acids including BCAA’s that optimize the kinetic and potential need for energy, not just an immediate effect.  Immediate energy, energy transfer and energy conservation optimize the synergistic mechanisms that go above and beyond the expectations of typical short-term energy beverages in this category.

Not all Creatine are Created Equal

VPX Sports® have created novel Creatine compounds that allow Creatine to maintain its structure over time in a beverage. Utilizing these novel patent/patent-pending innovations enable functionality of the Creatine molecule to deliver better efficacy in a beverage.  BANG® is the only carbonated beverage that contains this proprietary technology to deliver Creatine along with other health nutrients into the body.

CoQ10 Activates Energy in Every Cell of the Body

BANG®also contains CoQ10 which is not only required, but, responsible for activating cellular energy. CoQ10 helps to optimize energy synthesis by protecting the integrity of the mitochondria necessary for maintaining energy production.  CoQ10 is a non-polar compound which means it does not dissolve well into water.  In addition, the non-polarity of CoQ10

correlates with the reduced bioavailability compared to water soluble compounds.  In order to fortify with CoQ10, VPX Sports® have partnered with VIRUN® and Specialty Products Division at Hormel Foods to combine a patented CoQ10 encapsulation technology exclusive to the BANG® formulation and composition.  Having access to the patented technology for CoQ10 allows for a stable CoQ10 inclusion, clearer appearance and reduction in unfavorable flavor notes.  The encapsulation technology is GRAS, does not contain detergents and has been shown to increase the delivery of the active compound.

Jack Owoc, CEO and founder of VPX Sports stated, “BANG® creates an entirely new beverage category not intended to compete against the dozens of ‘old school’ energy drinks commercially available. BANG® is a well-researched and precise fractionation of energy expenditure and energy utilization to deliver where others ‘crash.’”

Philip Bromley, CEO VIRUN stated, “VPX Sports® is a perfect example of innovation; combining uniqueingredients to capture many mechanisms of action that contribute toward a specific claim and assure that claim is substantiated.’  ‘BANG® tastes incredible and I can’t wait to see it hit shelves!”

Experience the synergistic difference of BANG® 357 yourselves, visit www.vpxsports.com

VPX/Redline Sports Nutrition and Performance Beverages was founded in 1993 with one goal in mind: To produce the highest-grade, university proven sports supplements and performance beverages in the world.  VPX delivered on its promise by funding over 15 landmark human subject studies at the top universities in the country including, UCLA, Florida State, Baylor, University of Southern Maine and Memphis University, College of New Jersey, FIU et al. VPX continues to update and release new nutrition products, proudly maintaining its distinction as the “Frontrunner in Sports Nutrition.”  VPX is orchestrated by the world’s leading authority, author and developer of performance enhancing supplementation and physique-altering nutrition, Founder and CEO, Jack Owoc.

VIRUN’s Coenzyme Clear® and OmegaH2O® patented technologies encapsulate CoQ10 and Omega-3 EPA and DHA into water soluble, clear and shelf stable, safe ingredients. Marketed and branded under the FUXIONS™ brand of products by Specialty Products Division at Hormel Foods Corporation, the technology allows incorporation of nutrients such as CoQ10 and Omega-3 EPA & DHA into finished food and beverage products that were not able to be fortified before.  VIRUN® has received several patents, notice of allowances and international patents surrounding its technologies.