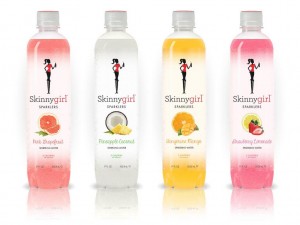 Continuing its foray into carbonated beverages — and celebrity partnerships — AriZona Beverages today announced that it has joined forces with former reality TV star, beverage entrepreneur and current talk show host Bethanny Frankel on a new line of five-calorie sparkling waters called Skinnygirl Sparklers. Frankel famously made a fortune in 2011 having sold her Skinnygirl brand of low-calorie bottled cocktail drinks to Beam Global for an estimated $100 million.

Well-known for its Arnold Palmer line of lemonade and tea drinks, AriZona most recently launched a new line of cream sodas in collaboration with former NBA star Shaquille O’Neal called Soda Shaq. Last year, the company introduced a lemonade line named after golf legend Jack Nicklaus, as well as AriZona Lemon Fizz, a lemon-flavored drink packaged in a can that was designed by controversial artist Richard Prince.

Like the company’s Soda Shaq line, Skinnygirl Sparklers do not feature the AriZona brand name on the front of the package. Instead, the new line of drinks uses the same imagery and logo as the Skinnygirl line of spirits. It’s unclear, but it appears that AriZona is licensing the Skinnygirl name from Beam, which in its  2012 second quarter report, revealed that it paid $8.1 million solely for the brand rights.

Frankel said in a recent interview with Entertainment Weekly that she had “been talking about doing a non-alcoholic beverage for a very long time,” and was waiting to find “the perfect partner.”

“Beverages are very competitive and distribution is key, just like in cocktails, and price point is important,” Frankel told Entertainment Weekly. “So I had that idea for a long time and not until I found the perfect partner did I decide to do it. I met a lot of different people and I have never ever been more excited about another business opportunity since cocktails.”

Skinnygirl Sparklers will launch in the New York metro area next week and will be available in Florida and Chicago by the end of the month. A national rollout is scheduled to follow.

The full press release is available below:

WOODBURY, N.Y., Nov. 11, 2013 /PRNewswire/ — The Skinnygirl™ brand has another all-star partner.  Bethenny Frankel, the Original Skinnygirl™, announced her new partnership with powerhouse AriZona Beverages on today’s episode of “bethenny”.  From the woman who brought you delicious, low calorie cocktails comes her first line of non-alcoholic beverages. Skinnygirl™ Sparklers are a line of sparkling waters mixed with real fruit juice, available in four refreshingly sweet bubbly flavors:  Tangerine Mango, Strawberry Lemonade, Pink Grapefruit and Pineapple Coconut. The new line will launch in New York, Florida & Chicago at the end of November with a national rollout to follow.

CAA Global Brands, representative of Skinnygirl™, brought these two renowned brands together to create this special partnership.   Skinnygirl™ Sparklers will combine AriZona’s tradition of exceptional quality with Skinnygirl’s™ knack for creating convenient, low calorie beverages without compromising flavor. These fun and fizzy delights are made with real fruit juice, six essential vitamins, super fruit extracts and Green Tea Polyphenols. Skinnygirl™ Sparklers contain no artificial flavors or colors and are only 5 calories per serving.

Creating a great tasting, low calorie, non-alcoholic beverage was important to Frankel, “I wanted to give my fans a delicious alternative to plain sparkling water and sodas.  My new Skinnygirl™ Sparklers are light, refreshing, fun and flirty and I am excited to partner up with AriZona Beverages to bring my vision to life.”

Wesley Vultaggio, Co-Owner/Creative Director of Arizona Beverages, added, “This partnership was a natural fit!  We love creating new products for our fans that are looking for innovative, low calorie options. Bethenny has developed a fantastic brand with Skinnygirl™, she has a loyal fan base and is a remarkable businesswoman. We look forward to working with her to bring more great tasting flavors of Skinnygirl™ Sparklers to market.”

For more information on this or any other AriZona product, please visit: www.drinkarizona.com.

About AriZona
Founded in Brooklyn, NY in 1992, AriZona’s mission is to offer top quality beverages in uniquely designed packages that are accessible and affordable. AriZona Beverages — makers of the number one Iced Tea in America, holds a unique position in the global beverage industry with its iconic $0.99 big can and “keeping it real” no frills approach to the consumer market.  AriZona never pays for glitzy advertising campaigns to gain consumer loyalty and is constantly ahead of the curve, carving out trends without the use of focus groups and market research. With a loyal following across various demographics, AriZona pulls its own inspiration from its fierce social media following and devoted fan base. To learn more about the AriZona lifestyle, please visit drinkarizona.com; Facebook: AriZonaIcedTea; Twitter: @DrinkAriZona

About Bethenny
Bethenny Frankel is the four-time bestselling author of Skinnydipping, A Place of Yes, Naturally Thin, and The Skinnygirl Dish. She is the creator of the Skinnygirl brand–which extends to cocktails, fitness, and health–and in 2013 she took the stage as the host of her syndicated daytime talkshow, “bethenny”. She has been named one of the Top 100 Most Powerful Celebrities by Forbes magazine, featured in both Health magazine and Glamour.  She is a graduate of the Natural Gourmet Institute for Health and Culinary Arts. Bethenny lives in New York with her daughter, Bryn, and dog, Cookie. Visit www.bethenny.com.