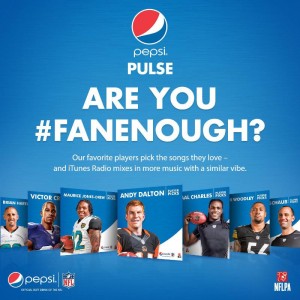 PURCHASE, N.Y., Sept. 26, 2013 /PRNewswire/ — Today, Pepsi announced the launch of a new set of stations on iTunes Radio, entitled “#FanEnough,” bringing a music angle to its current NFL-themed “Are You Fan Enough Campaign.” The launch of the Pepsi #FanEnough station marks the second wave of branded stations to be unveiled since PepsiCo was announced as the exclusive food and beverage launch partner for iTunes Radio. Following the successful introduction of Pepsi “Pulse #Now” – a collection of stations dedicated to Pop, Country, Latin and Electronic Dance Music – the new Pepsi #FanEnough stations will continue to innovate and further Pepsi’s legacy of bringing iconic music to fans, this time in both the sports and entertainment space.

Fans who tune into Pepsi #FanEnough on iTunes Radio can listen to select NFL players’ personally curated iTunes Radio stations and access music chosen by these players to get fans pumped up for the 2013 NFL season. Through its #FanEnough stations on iTunes Radio, Pepsi is continuing the excitement of its “Are You Fan Enough?” campaign, which brings NFL fans closer to the players, teams, game, and now music, they love. Starting today, all 16 NFL stations are available at iTunes.com/Pepsi

The “Are You Fan Enough” campaign is the centerpiece of a broader marketing effort around bringing fans special sports and entertainment content and experiences throughout the NFL season.  Only Pepsi is capable of delivering fans this kind of access to the NFL and its players through the brand’s entertainment partnerships across sports, music and more.

“Our branded stations on iTunes Radio allow Pepsi to bring great new music content to our fans, once again putting them at the center of the action,” said Javier Farfan, Senior Director, Culture and Music, PepsiCo Beverages. “Our brand is always seeking new ways to get our fans excited and place a unique spin on delivering exclusive content that combines their shared passions.  Pepsi is known to work with the best in the music industry so creating these stations on iTunes Radio is a natural fit for us.”

Professional NFL Players with #FanEnough stations on iTunes Radio include:

For fans that prefer more variety of today’s best in Pop, Country, Latin and Electronic Dance Music, Pepsi Pulse #Now not only offers the latest in these genres and all in one place, but also features several artists that have previously partnered with the brand. This is yet another way that Pepsi is giving consumers convenient access to iconic music that they love.

The Pepsi Pulse #Now and #FanEnough stations on iTunes Radio are yet another way that Pepsi is bringing fans the best in music, pop culture and entertainment. Last year, Pepsi launched its interactive digital “Pepsi Pulse” platform, which curates and serves up trending pop-culture content, entertainment news and consumer incentives and includes an interactive display of pop-culture news content and interaction with artists and celebrities. Earlier this year, Pepsi launched its “Iconic Summer” campaign, which integrated cultural icons, must-see music events and festivals, incredible prizes and outstanding pop-culture experiences to provide unforgettable entertainment to fans across the country.

About PepsiCo
PepsiCo is a global food and beverage leader with net revenues of more than $65 billion and a product portfolio that includes 22 brands that generate more than $1 billion each in annual retail sales.  Our main businesses – Quaker, Tropicana, Gatorade, Frito-Lay and Pepsi-Cola – make hundreds of enjoyable foods and beverages that are loved throughout the world.  PepsiCo’s people are united by our unique commitment to sustainable growth by investing in a healthier future for people and our planet, which we believe also, means a more successful future for PepsiCo.  We call this commitment Performance with Purpose: PepsiCo’s promise to provide a wide range of foods and beverages from treats to healthy eats; to find innovative ways to minimize our impact on the environment by conserving energy and water and reducing packaging volume; to provide a great workplace for our associates; and to respect, support and invest in the local communities where we operate.  For more information, please visit www.pepsico.com.