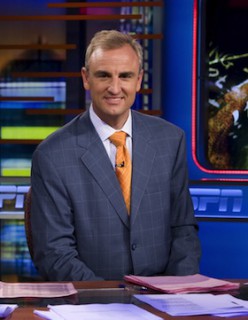 BOULDER, Colo. — Cheribundi, a leading producer of tart cherry juice products, announced that they are bringing on Trey Wingo, a key figure behind ESPN’s year-round coverage of the NFL, as a brand ambassador.

Trey Wingo is most notably known as the host of NFL Live, as well as NFL PrimeTime and SportsCenter specials. Wingo also contributes to the championship golf presentation and is a regular contributor to ESPN Radio programs and digital platforms.

“I’ve known Steve for several years through the beverage industry, and after seeing Steve’s strong enthusiasm and commitment to Cheribundi, I had to try it. Steve sent me some samples and had me take the Cheribundi 7-Day Challenge. Cheribundi is a great product and it works. I’m excited to help Cheribundi build more awareness,” says Wingo.

CEO, Steve Pear, says, “We’re excited to partner with Trey. With Cheribundi being a functional beverage purchased by over 100 sports teams and Trey being a key influencer in the sports world, it couldn’t be a better fit.”

A native of Greenwich, Connecticut, Trey Wingo graduated from Baylor University in 1985 with a bachelor’s degree in Communications. Wingo began his career in 1987 as a sports producer for NBC’s News at Sunrise in New York and has since worked his way up to ESPN. Trey Wingo joined ESPN in November of 1997 as an anchor for ESPNEWS and has served as the host of NFL Live since its inception in 2003.

Wingo has anchored NFL studio coverage from remote locations at the Super Bowl and Pro Bowl. In his previous years, he hosted The NFL on ESPN Radio, a day-long update and analysis program on NFL Sundays. Wingo also anchored ESPN’s NCAA Women’s Basketball Tournament including the Final Four and Selection Show. In recent years, he has added U.S. Open Golf and The Open Championship coverage to his on-air responsibilities.

During his career, Trey Wingo has won six Mid-America Regional Emmy awards for reporting, including three straight years for outstanding sports reporting. He remains active in a variety of causes including the Prostate Cancer Foundation’s Athletes for a Cure campaign, The V Foundation for cancer research, and the Special Olympics.

“I’ve known Trey for a few years now, and I am looking forward to working with him on Cheribundi. I know this partnership with Trey will enhance our national brand awareness,” says Pear.

Cheribundi is a fresh pressed tart cherry juice made from a proprietary juicing process developed by scientists at Cornell University to yield peak antioxidant levels. Regular consumption of tart cherry juice is reported to reduce post-exercise muscle and joint pain. Recent studies have shown that the anti-inflammatory properties of tart cherries may reduce pain from gout and arthritis and they have an extensive list of heart health benefits. Tart cherries also contain significant levels of melatonin that is believed to promote deeper,
more restful sleep.

Over 100 NCAA and professional sports teams, plus hundreds of professional and amateur runners, cyclists, and triathletes are currently purchasing Cheribundi for faster muscle recovery, better sleep and less pain.