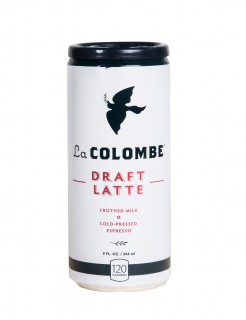 Third-wave coffee company La Colombe has introduced its second ready-to drink beverage, a can-packaged “draft latte.” The beverage, a blend of espresso, milk and sugar that is infused with nitrous oxide, was designed to replicate the same frothy drinking experience as offered by the popular draft-poured lattes that La Colombe serves in its cafes.

La Colombe partnered with Crown Holdings to create the innovative package, dubbed the “InnoValve” can. Liquid gas is injected into the can through a valve at the bottom and expands when the can is opened, creating tiny bubbles that create a frothy texture.

CEO and co-founder Todd Carmichael said that despite the complex process of development and the can’s patent-pending technology, he views the beverage itself as a simple, yet premium, blend of coffee and milk that can appeal to a broad spectrum of consumers.

“I come from this world of third-wave coffee, where a great deal of time is spent in really overburdening the consumer with education,” Carmichael said. “It’s milk and coffee, which really isn’t a specialty thing at all. It feels special.”

The beverage has 120 calories and 14 grams of sugar (2 grams are added cane sugar, the rest is derived from the milk) per 9 oz. can, does not require refrigeration and has a shelf life of 180 days.

La Colombe’s draft latte is produced in two locations: a company-owned facility in Philadelphia and a manufacturing plant in Missouri operated by dairy cooperative Dairy Farmers of America (DFA). While Carmichael views it as critical to have control over the production process, he said current capacity at the company’s facility is not enough to satisfy sales projections. With DFA production scheduled to begin in July, the contract will enable La Colombe to produce 50 million cans through the end of 2016, and Carmichael hopes to increase volume to 250 million cans next year.

While La Colombe, which also markets a cold brew coffee packaged in 12 oz. bottles, has yet to announce retail partners for the latte, Carmichael said that several large grocery chains have shown significant interest in the product.

“We have forecasts and promises,” he said. “We have retailers who are interested in getting their allocation.”

The draft lattes are currently available online on La Colombe’s website where they are available in 4-pack for $10.00. The pack will be available for purchase in the coming weeks in select La Colombe cafés in Philadelphia, New York, Chicago and Washington, D.C. La Colombe expects single serve cans to be widely available in July with a retail price of $2.79-2.99.