“Every aspect of the new package design was backed by consumer research surveys we conducted throughout each phase of this project,” said Robert Kral, Vice President of Marketing & Procurement for Protein2o. Kral said that in addition to protein content, respondents viewed sugar, calorie and carb content as the most compelling aspects of the drink. The feedback led to the bold nutritional callouts on the front panel along with an added focus on fruit imagery and more sophisticated flavor names. 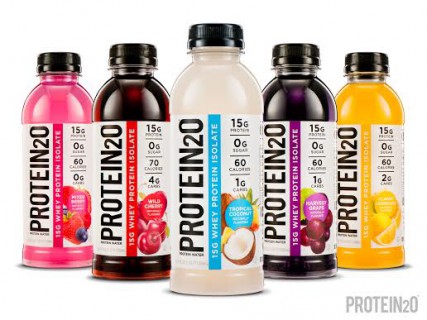 The innovations reflect the brand’s new tagline, “The Lighter Side of Protein” and will be backed by a new marketing campaign centered on the messaging “Packed with Protein. Not Calories”.

Along with the new look, Protein2o has revamped their formulas and transitioned to a new custom Amcor PowerFlex bottle. Some of the brand improvements include:

“We’ve previewed the new product innovations to many of our key retail customers over the past several months and the response has been overwhelming,” said Brian Stuckelman, Vice President of Sales for Protein2o. “There’s a lot of excitement from Buyers who see protein waters as expanding their category to consumers who are interested in protein; there is a general consensus that the new branding and flavor profiles will be widely accepted by veteran and first time protein consumers alike.”

The revamped line is now available at select retailers, and Protein2o will continue to rapidly expand availability over the next two months.

Protein2o® was created as a low calorie, low carb alternative to protein drinks packed with empty calories, carbs and sugar. It has been expertly formulated with 15g of the purest whey protein isolate in the world, rich in branched chain amino acids with the highest Leucine content of any known protein, necessary for muscle protein synthesis. To learn more visit DrinkProtein2o.com, facebook.com/Protein2o, twitter.com/Protein2o and Instagram @Protein2o. The Lighter Side of Protein.™