Snap Kitchen, a fast-growing retail chain that sells healthy grab-and-go meals, snacks and beverages, has partnered with super-premium coffee company La Colombe to launch a co-branded line of bottled coffees. Snap Kitchen operates 49 locations in Austin, Dallas, Houston, Chicago and Philadelphia and the new products, both made with La Colombe’s “cold-pressed” coffee, are sold in all of its stores.

Launched in 2010, Snap Kitchen promotes itself as a “one stop healthy meal shop” that sells fresh, chef-made, nutrient-dense and portion-controlled meals, most under 500 calories. Headquartered in Austin, Snap operates as a hub-and-spoke business, producing its meals, juices and coffee at production facilities in cities where it operates. The food and beverages are delivered daily to area locations.

Until recently, Snap Kitchen produced its own cold brew coffee. That changed after company executives reached out to La Colombe regarding a potential collaboration. Snap’s director of marketing Kyle Hoedl said that the coffee brand is adored among Snap executives, and he praised the high quality and consistency of La Colombe products as a key to the partnership. 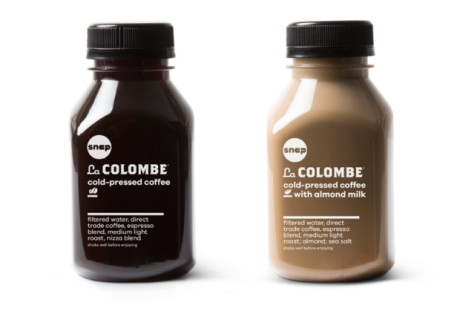 “They were a great, great fit and exactly what we were looking for,” Hoedl said.

La Colombe provides Snap with a concentrated version of its cold-pressed Pure Black coffee, which is made using grounds that are steeped for 16 hours in stainless steel wine tanks in an oxygen-free environment, pressed and filtered twice. The company’s “Nizza blend” of coffee beans are sourced from Brazil, Colombia, Ethiopia and Honduras. Snap Kitchen produces two beverages from the liquid concentrate, a black, unsweetened coffee and one blended with house-made almond milk. Packaged in 10 oz. squat bottles, the black coffee retails for $3.49, while the almond milk-blended version is priced at $4.49.

Hoedl noted that while La Colombe operates cafes in Philadelphia, New York City, Boston and Chicago and is beginning to roll out a number of RTD coffee products across the U.S., it lacks an established presence in Texas. With the launch of the new coffees, Snap will help introduce the La Colombe brand to a range of customers in the state, he said.

“We love the idea that we can bring La Colombe to [Austin, Dallas and Houston], and get the coffee in the hands of customers in those cities,” Hoedl said. “It’s a great, mutually beneficial relationship because we’re helping them come to Texas and also they’re providing this really great coffee for us to sell.”

Snap does not sell beverages that contain dairy or refined white sugar, something that precludes it from carrying La Colombe’s canned Draft Latte products, according to Tara Lane, Snap’s director of menu innovation. However, she said that Snap executives are enamored by the lattes, and that the two companies are in discussions about ways to create new versions with dairy substitutes, including coconut milk and almond milk.

“That’s something that we’re really interested in,” she said. “It’s in the near future.”