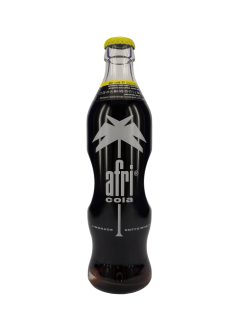 NAPA, Cali. — Afri Cola, a premium high-caffeine cola from Germany, is now available in more than 1,000 retail and on-premise locations in the U.S. after it’s re-introduction in late May 2017.

Afri Cola has been enthusiastically received not only by many of the die hard fans who have had to wait over 15 years for its return, but also by a new generation of selective beverage drinkers who appreciate its unique bottle design, use of real sugar and natural ingredients, as well as the extra energy that comes from the original high caffeine formula.

“Afri Cola has been around since the 1930’s, when its original formula using real sugar and extra caffeine was created by Karl Flach of F. Blumhoffer Nachfolger company of Cologne, Germany,” said Steve Davis, owner of Classic Beverage Imports, the exclusive U.S. importer of the Afri Cola brand. “The Afri Cola brand was available in the US in the late 1990’s to early 2000’s. [It] was doing quite well, especially in the West Coast, but in the early 2000’s ownership changed in Germany and the new owners decided to get out of the export business. Basically, Afri Cola all but disappeared overnight from the U.S. market.”

Understanding the current popularity of the craft soft drink segment, and learning that a passionate loyal following of the Afri Cola brand already existed, Davis jumped at the opportunity to bring Afri Cola back into the U.S.

“I reached out to many of my distributor and retailer contacts who had sold Afri Cola years ago,” Davis said. “Every one of them was excited to hear that Afri Cola would be available again and committed to purchasing once the product hit U.S. soil. Hearing that, and also learning about the rich and colorful history of the brand and many of its unique qualities, it was an easy decision to make the jump into bringing in the first containers of product.”

The Afri Cola brand has gained acceptance across a wide variety of retailers. Current retail availability includes upscale grocers such as Nugget Markets, Harmons, and Raleys; beverage chains such as BevMo! and Total Wine and More’s West Coast locations; specialty retailers such as Rocket Fizz and Jungle Jim’s; convenience retailers including franchise 7-11, Circle K, and Chevron Extra Mile locations; and many other independent markets, deli’s, and on-premise accounts.

In January, Afri Cola will be exhibiting at the 2018 Winter Fancy Food Show – booth 3933. Distributor/Retailer/Press inquiries can be sent to steve@africola-usa.com.