Last week a Reuters report that PepsiCo was in talks to acquire Vita Coco maker All Market Inc. had the beverage industry buzzing over what could be yet another billion-dollar acquisition of an entrepreneurial beverage company by a strategic giant.

But sources cited in the report say the deal isn’t all squared away just yet. According to Reuters, PepsiCo has offered less than the $1 billion All Market has been seeking for the sale.

Vita Coco is part of Dr Pepper Snapple Group’s (DPSG) Allied Brand portfolio, but the company, which acquired Bai for $1.7 billion in November, is not financially invested in the coconut water brand. Red Bull China owner T.C. Pharma acquired a 25 percent stake in Vita Coco in 2014 in a deal that, at the time, valued All Market at $655 million. 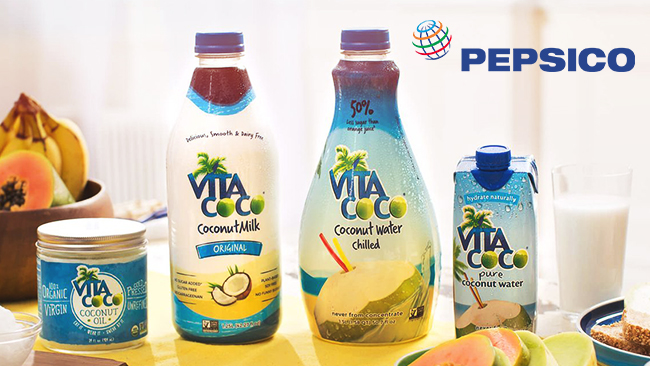 Acquiring Vita Coco would also put PepsiCo into serious play in the coconut water category, especially against its primary competitor, The Coca-Cola Co., which acquired the other major coconut player, Zico in 2013. Speaking to BevNET, Euromonitor industry analyst Howard Telford said a Vita Coco/PepsiCo deal would shoot PepsiCo to the top of the $2.5 billion global coconut water market.

“Any potential outright acquisition of Vita Coco would make PepsiCo the clear leader in global coconut water, which remains one of the fastest growing categories in beverages,” Telford said. “We expect double-digit volume growth for the coconut and plant water category through 2021. PepsiCo [is] already the number two global player in terms of retail volume in coconut and other plant waters via their combined brands in the space. Combined, Vita Coco and PepsiCo presently control about a third of global packaged coconut and plant water volumes.”

PepsiCo currently owns O.N.E. Coconut Water, which it distributes in the U.S., Kero-coco, a brand sold in Brazil, and has sold coconut water through its Tropicana label in various global markets, including Japan. The company also sells coconut water as part of its Naked brand. None of the brands, however, have reached Vita Coco’s level of success. Telford believes that an acquisition by PepsiCo would present an opportunity to extend its reach with coconut water globally and market to consumers at a variety of need states.

“It will be interesting to see how the different price points and relative strengths of each brand can be used to develop the coconut water category globally, as a lifestyle beverage for some consumers, an alternative sports drink or simply a healthier refreshment option,” he said.

Mike Burgmaier, co-founder and managing director of Whipstitch Capital, which helped facilitate PepsiCo’s acquisition of KeVita last November, said that not only would a Vita Coco acquistion be a significant statement on PepsiCo’s intent to grow its presence in the healthy food and drink sector, but it could also become a statement to the industry of how “proven” a brand should be before acquisition. O.N.E., he said, is an example of a brand that was acquired too quickly.

“We talk to Pepsi about every single week about lots of different companies,” Burgmaier said. “There is a clear desire to grow the healthy component of Pepsi’s portfolio. All the growth is coming from the cleaner and healthier beverage set.”

The KeVita acquisition, Burgmaier said, could represent a “seminal turning point” for PepsiCo in their health and better-for-you mission. Following that deal by picking up Vita Coco would be yet another signal of the company’s dedication to lead in the health revolution.

Greg Wank, leader of the Food & Beverages Services Group at accounting firm Anchin, Block & Anchin, concurred, and said that a Vita Coco acquisition would bolster PepsiCo’s diversification of its natural products portfolio. It makes sense to PepsiCo, he noted, to get a stronger foothold in coconut water.

“It’s very attractive at a number of levels,” Wank said. “If Vita Coco is truly the leader and they control a quarter of a billion dollar marketplace today in a category that’s growing 20 percent a year, this obviously gives Pepsi a huge amount of leverage to dominate a category they feel is going to be worth $2 billion in a couple more years.”

But after Bai’s $1.7 billion acquisition, many companies now feel that the bar has been raised for how much a successful brand is worth, something that will certainly be weighing into negotiations between PepsiCo and All Market. Also, according to Telford, while Bai set higher expectations, there are complications due to T.C. Pharma’s partial ownership that may further be making the deal more difficult to close.

Wank said it’s natural for PepsiCo to be taking a more cautious, conservative estimate of Vita Coco’s worth, while All Market is going to go for the biggest deal it can get.

“A billion dollars just sounds fantastic because it’s a nice big round number and everyone loves to read about round numbers,” Wank told BevNET. “But as a financial and accounting professional I’m pretty disciplined. I don’t focus on big round fancy numbers, I focus on the fundamentals and what I think something is truly worth.”

From the perspective of a young, unacquired company, Burgmaier said, there is likely pressure from investors to make a major leap forward in sales and distribution. Vita Coco has risen to a point of immense success without selling or going public, and sooner or later investors are going to expect All Market to make the big decisions about the company’s future, he added.

But it is also in All Market’s business to get the best deal possible, and “billions” seems to be the new language top beverage brands are speaking. In February, All Market CEO Michael Kirban told Bloomberg he expects Vita Coco to reach $1 billion in sales this year.

If PepsiCo manages to seal the deal, it may mean billions more.