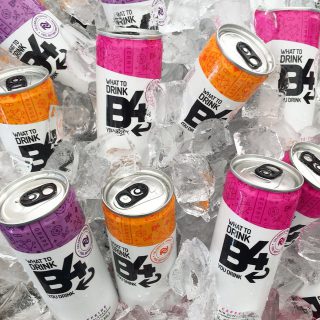 ORLANDO, Fla. — B4, a non-caffeinated liquid supplement that helps shield the body from the aftereffects of consuming alcohol, celebrates one-year anniversary by releasing two new flavors and redesigned packaging. Berry and grape will be available, along with B4’s original orange flavor, starting next month. The product is now for sale at more than 500 retail locations in six states and at DrinkB4.com. This includes Florida, Texas, New Jersey, Kansas, Louisiana and Georgia. Plans are underway to launch with a major retailer in California and Arizona early in 2018.

B4 has not only evolved its packaging and expanded the product line, the company continues to increase its market reach which is helping to shape the alcohol precovery category.

Drinking a can of B4 before consuming alcohol fortifies the body with electrolytes, amino acids, vitamins, plant extracts, antioxidants and minerals to protect against alcohol’s crash course through the system. Filled with B vitamins, glutathione and milk thistle, and without any caffeine, the supplement provides metabolic energy to enjoy the night just as much as the morning after. These ingredients offer protection from the toll alcohol takes on the body, like sunscreen for the liver.

Today’s consumers demand quality, paying closer attention to ingredients and what they are putting into their bodies. This includes choices they make about what to drink and how much. After listening to feedback from B4 drinkers during year one, the company has met the demand for new flavors, offering consumers a choice of berry, grape or orange.

The drink was created by licensed pharmacist, John Mansour, and his business partner, beverage industry veteran Dave Larue. The pair created B4 to help grow a new category of precovery products that aim to prevent post-drinking symptoms before they happen. Since the product launch in December 2016, the company has earned more than $500,000 in sales revenue.

“B4 is our first product in this new category and it sells like crazy. After only two months, it became the number two non-alcoholic item throughout our entire chain of stores, behind only Coca-Cola® two-liter bottles,” said Kris Becker, Director of Purchasing at ABC Fine Wine & Spirits in Florida.

“We are committed to science-based product development and education, honesty and transparency, and becoming the largest brand worldwide in the precovery category we are helping to build,” said Mansour. “B4 gives people the ability and peace-of-mind to celebrate the night and function at a high level the next morning.”