The Roar Organic line is intended to offer a lower-calorie, “clean” hydration product that complements the company’s original sports drink. According to the L.A. Libations team, along with Roar Kids, which is a low-calorie kid’s drink featuring licensed Marvel superhero images, the new Roar Organic line is a strong complement to the rest of the innovative beverage brands in the L.A. Libations portfolio.

“We pride ourselves on finding better-for-you alternatives in the beverage space and Roar Organics and Roar Kids really hit every mark we are trying to get to, to satisfy the health engaged consumer,” said Tina Mirfarsi, L.A. Libations’ head of business development.

The incubation company, which invests in and helps distribute brands throughout a network that includes some of the country’s biggest retailers, believes that Roar has a chance to bridge the gap between the natural foods shopper and the conventional retailer.

“We really wanted a product that could be mainstream organic, not orthodox,” noted Danny Stepper, a co-founder of L.A. Libations.

Roly Nesi, the founder of Roar, said the company prides itself on its youthful focus and wanted to launch a product line that might be more appealing to women as a companion to its sports drink line. The company engaged hot Austin design team Make and Matter to put together a product that it could describe as “Lululemon in a bottle.”

“We wanted it to be a yoga-style sports drink, with a totally different kind of vibe,” Nesi said. While the products are all fruit flavored, they feature patterned labels that don’t have the traditional fruit or liquid splash imagery. 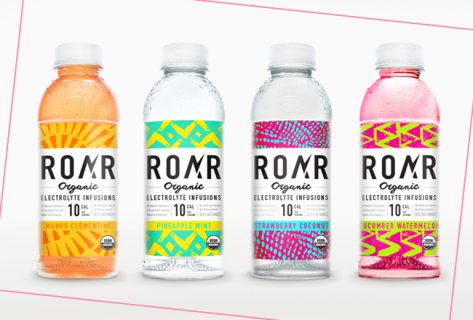 The company hit $3.5 million in sales last year following revenues of $500,000 in 2015, according to a story in Newsday. With L.A. Libations as a partner, both companies plan to try to loosen the reins and expand quickly. It’s currently sold in about a dozen states, with a heavy emphasis on New York and California. Texas and Colorado are opening up in the fall.

“As far as accounts, we’ll go as fast as Rolly wants us to go,” Stepper said. “Retailers are looking for products like this, that tick all the boxes, that have a point of differentiation. It’s more about where we’re not going to put it as opposed to where we’re going to put it.”

Blossom Water, has announced new placement of its floral-enhanced essence waters at 750 grocery stores across the U.S. The drinks are now available at locations of Safeway and Albertsons in the Pacific Northwest, Shaws/Star Market stores throughout five New England states, and over 70 Acme stores in Philadelphia and the surrounding region. Blossom Water is also now carried by ShopRite at over 125 locations in N.J. and N.Y., and more than 130 Price Chopper stores located in Upstate N.Y., Pennsylvania and most of New England. The brand also added placement at stores north of the border with new distribution at Hasty Market, where Blossom Water is carried at more than 150 locations in Ontario, Canada.

In a press release, Blossom Water president and co-founder Steve Fortuna stated that “when added to strong and growing ties with Kroger and others, we easily should meet our 2017 stretch goal of 1,500 new doors, positioning us for accelerated growth in 2018.”

New Orleans-based kombucha company Big Easy Bucha last week announced that five of its flavors will be available in more than 1,100 Publix stores across seven states. The brand’s Geaux Green, Cajun Kick, Jazz Juice, Streetcar Sipper, and Bayou Berry will land on Publix’s shelves this summer, according to a company press release.

“As a fourth-generation Floridian, I practically grew up in Publix stores,” Austin Sherman, co-founder of Big Easy Bucha, said in the release. “It’s incredibly exciting to see the grocery chain pick up the only truly regionally inspired kombucha brand. And I don’t think any beverage is better suited for pairing with a Publix sub.”

“This strategic partnership has been in the works for a year as we sought out the best partner to get our water to China,” Icelandic Glacial chairman and co-founder Jon Olafsson said in a press release. “We are thrilled that Golden Field will give Chinese consumers the opportunity to experience a piece of Iceland.”