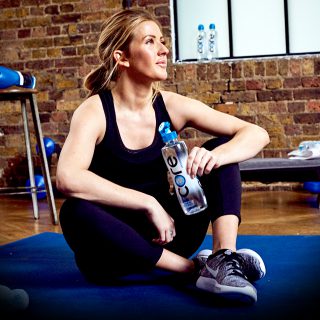 CORE Hydration has unveiled singer Ellie Goulding as its newest celebrity investor and the centerpiece for a new cross-platform marketing campaign this summer.

Goulding is the latest name from the entertainment world to sign on as an investor and endorser for CORE Hydration, a premium pH balanced water and a part of the brand platform which includes CORE Organics. The British-born pop artist, 30, shot to fame in 2010 with her debut album Lights, and as her music career has continued, she has also become recognized as an outspoken advocate for fitness and exercise in both interviews and on social media.

“I discovered CORE when I was touring the U.S. last year and loved it. It’s been my go-to water ever since,” Goulding said in a press release. “I also love that CORE’s larger mission is to inspire people to be true to themselves. I am excited to be part of the CORE family and further motivate others to lead a healthy balanced life, something I aim to do.”

“Knowing that Ellie was already a fan of CORE and what the brand stood for made the partnership a natural extension” said Eric Berniker, CMO of CORE Nutrition, in a press release. “She is unabashedly genuine and driven, and is always game to put in the hard work in order to achieve success, whether that be in the gym, on stage, or in the studio.”

Speaking with BevNET, Berniker said that Goulding’s range of interests and talents spoke to the millennial audience that has been the brand’s key focus.

“[Millennials] are not about being put in a box,” he said, describing the new #TrueToTheCORE campaign as tapping into “what drives you and what you’re passionate about.” “They have these different passion points and are connected to a number of different things. It works on a lot of different levels for us.”

The campaign featuring Goulding will include print and digital advertising components in the magazines Cosmopolitan, ELLE, Us Weekly, and Shape, though Berniker said that CORE is not focusing specifically on marketing to women. In addition to social media integration through Instagram, Facebook and Snapchat, there will also be a retail and social media sweepstakes to win a workout with Goulding.

Outside of Goulding’s arrival, Berniker noted CORE’s position as one of the leading premium water brands sold in the convenience store channel, according to market research firm IRI, despite only having distribution on both coasts. He said the company completed its national distribution network to cover the central part of the country with Dr Pepper Snapple Group at the beginning of the year, a move that has allowed CORE to bring on national accounts like Target, CVS and Walgreen’s, as well as further penetration at 7-11 stores.

“We just want to make sure that, along with all the great things we’ve been doing on the sales and marketing side, that we can provide that air support nationally to markets that we may not have a team in,” he said.

With a growing roster of powerhouse names in entertainment, the next question is if a bigger marketing play involving the collective group could be a possibility.

“A lot of the artists who are investors and involved with the brand are fans of each other, which is great,” said Berniker. “They’ve talked about positive aspects of how they feel about each other, so I would never rule that out.”