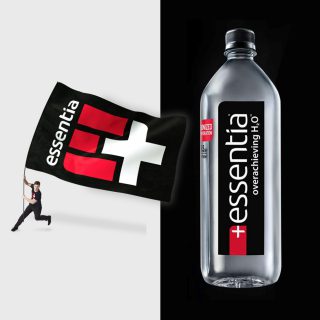 In a press release, the company described the move as “an evolution in the brand’s identity” aimed at building broad awareness and visibility nationwide. It stated that the campaign “…is based on Essentia’s belief that better hydration helps people do all the things that make them extraordinary and ‘unlocks their full potential’ whether they’re an athlete, a musician, a computer programmer or a student.”

“We started this brand evolution journey almost two years ago, so it’s exhilarating to see it finally come to life through hard work by our employees and partners,” said Ken Uptain, CEO and founder of Essentia Water, in the release. “Broadening our visibility across the nation puts Essentia in the primetime spotlight to compete successfully within the premium bottled water category.”

Speaking with BevNET, Karyn Abrahamson, a former Starbucks managing director who joined Essentia as VP of Marketing and Brand Innovation in 2015, said that she was hired by Uptain to specifically examine how the brand was being presented from an identity, messaging and marketing standpoint. She spent over six months doing research on the brand’s core consumers and the premium water category as a whole, a process she described as “rolling up our sleeves and being honest and critical with ourselves about our efforts.”

“What we were trying to do was get from being just a bottle on the shelf that had a point of difference in the product features to really giving the brand as a whole a clear voice and personality,” said Abrahamson, making the comparison to building a “loved lifestyle brand” similar to Apple and Nike. “We want people to connect with this brand in an emotional way that makes them feel like we are doing more for them and helping them be their best.”

More specifically, Abrahamson said Essentia’s brand evolution is aimed at millennials, aged 18 to 34, who constitute the highest consumers of premium bottled water. She explained that Essentia’s offering — high pH water that it claims provides superior hydration — has a strong appeal for consumers who “want to be at their best.” 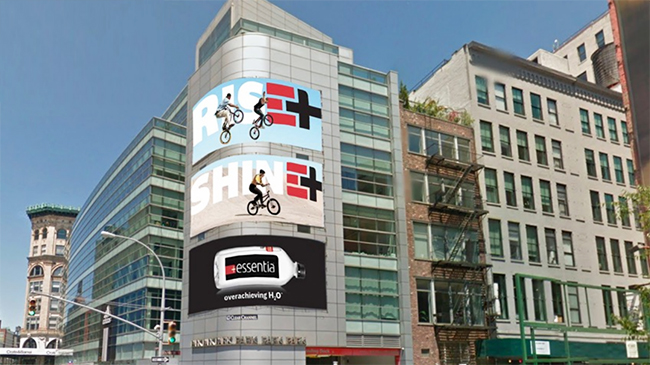 Abrahamson’s research also included exploring the brand’s equity from a visual design standpoint. Noting that consumers associated Essentia with its red and black color scheme and the plus symbol, the company reworked those elements into a new logo designed to have a badge or flag-like feel which Abrahamson said would “really signify the #EssentiaNation.”

The new campaign, which features the tagline “Overachieving H2O,” will feature various field marketing initiatives, radio and digital placements and social media activations, as well as billboards, wall murals, street subway panels and other out-of-home elements. The efforts will have a concentrated focus in key markets including Los Angeles, New York City and Portland, Ore.

Among the more interactive advertising elements is a hand-painted mural in the Williamsburg section of Brooklyn, N.Y. featuring five of the brand’s “overachievers,” such as actress Sasha Lane, media executive Joe La Puma, and Paralympic athlete Justin Widhalm. The mural’s “Snapchat wall” allows smartphone users to scan codes through the photo sharing app that “reveal stunning photography and inspiring stories” from the influencers. A vinyl version of the wall will debut in Portland later this summer.

Abrahamson said selecting brand influencers from a wide variety of fields and backgrounds, ranging from pro athletes to a college student in a marching band, underlines Essentia’s positioning as an inclusive brand interested in celebrating consumers’ personal stories.

“We really want to invite everybody into this,” she said. “Our end goal from a high-level brand standpoint is we are really trying to start that movement for better hydration.”