If you stand at the top of the ruby red staircase that sits in the center of New York City’s Times Square and look out into the city, it can be overwhelming to witness the river of people that flows through that relatively small corner of the world every day. So much foot traffic, so many hands. If you look closely at those hands, the hands of the tourists, the business people, the theatergoers, they’re often clutching a drink: a coffee cup here, a soda bottle there, and lots of water. If you’re an entrepreneur it’s like a dream — your product there on sale for thousands of people from around the world right in the heart of Manhattan.

Now, 20 small American beverage brands are sharing that dream there in the hub with the launch of DRINK, a first-of-its-kind non-alcoholic beverage bar located inside the flagship American Eagle Outfitters store located at the intersection of W 46th St. and Broadway in New York City. 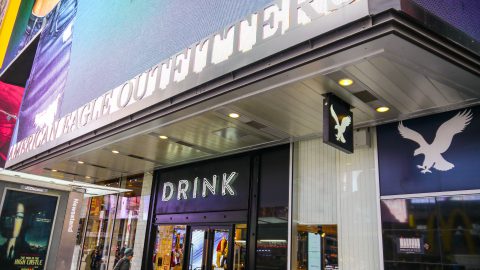 DRINK at W 46th St. and Broadway in Times Square

DRINK is the result of more than a year of tireless work by project leader Zoe Feldman, 32, of venture capital firm Cleveland Ave. Feldman is a former senior associate of business innovation with PepsiCo and has been involved in the beverage industry for nearly ten years. DRINK, she said, is the culmination of that past decade of beverage and venture capital work.

“DRINK is a showcase of emerging entrepreneurial beverage companies and the people behind them from all across the country,” Feldman said. “I think the cafe creates a strong personal connection between customers and the entrepreneurs. We presented things thoughtfully in terms of having brand back stories, in store people doing demoing and we’ve created a lot of content around hoping to educate customers around these small brands and the makers behind them.”

The unveiling of DRINK is the first major public reveal for Cleveland Avenue, which has also made investments in some of the stocked brands. The firm was founded by former McDonald’s CEO and President Don Thompson to focus on innovative new food and beverage concepts. 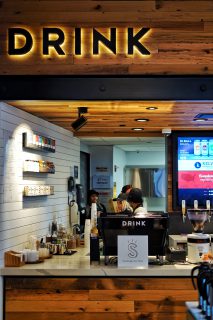 The interior was specially designed to blend into American Eagle’s aesthetic.

“The DRINK concept is a game-changer in traditional retail, and our team is redefining innovation in beverage,” Thompson said. “We formed Cleveland Avenue to strategically invest in food, beverage and restaurant creations, and to support the people behind these ideas. By partnering with American Eagle on DRINK, we’re establishing a sustainable, viable business to generate revenue and build brand buzz for small entrepreneurs and the companies who support them. I recently visited DRINK and was simply blown away by the new and unexpected atmosphere we’ve created within a traditional retail space.”

With its own outdoor signage, DRINK fits naturally inside the clothing retailer with its own corner space near shelves of jeans. Only about 400 square feet, the store-within-a-store blends into the American Eagle design with wood paneling, minimalist fonts, and use of the clothing company’s signature navy blue color scheme, DRINK simultaneously announces itself to visitors while also looking as if it’s always been there and always belonged there.

“It was very adaptive,” Feldman said. “It had to fit the American Eagle aesthetic.” 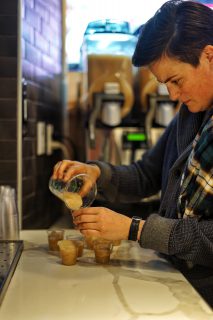 American Eagle has ensured that DRINK customers have standing room to breathe in and includes countertops equipped with phone chargers for customers to stand, relax and enjoy their beverages. The bar itself features an LED digital menu with 10 custom-built tap lines, which flow 18-feet on down from the floor above where kegs are stored in a walk-in fridge.

On draft are five flavors of Cannonborough soda, Wandering Bear Cold Brew, Up Mountain Switchel and three flavors of Pilot Kombucha. Immediately below the taps is a fridge featuring more than a dozen bottled CPG brands of beverages from across the United States. A slushie machine offers cold treats from Kelvin Slush Company.

But what has been the most popular item since DRINK’s soft opening in December, according to Feldman, is the coffee rig, featuring beans and recipes from SuperCrown Coffee Roasters. DRINK is now the largest wholesale client for the New York-based company and all of the staff have been specially trained by SuperCrown on how to prepare the coffee to ensure the quality is the same as that expected from the company’s home cafe in Brooklyn. 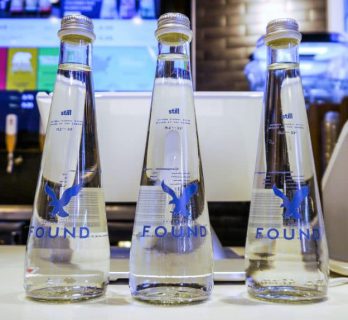 “We trained them on everything from the bean to the brew,” said SuperCrown wholesale account trainer Cory Bogus. “We had to look at the market here, which is more of a Starbucks crowd, and figure out how to bridge the gap between our Brooklyn clientele and the Times Square clientele. Much of it is the same, except here everything is to go.”

The beverage brands are permanent and do not rotate, Feldman said. However different flavors will be available in the future and DRINK also offers a special drink of the month which allows different brands to be featured.

Of the brands available at DRINK, Feldman also wanted to be sure a sizable portion of the entrepreneurs were women. Both venture capital and the beverage industry are dominated by men, she said, and trying to give exposure to other women in the field was an important element of DRINK from the start.

“This industry has traditionally been male-dominated, but it’s seen a real uptick in female entrepreneurs recently and I’m excited to bring them into DRINK,” Feldman said. “CPG is historically very male and so is venture. I’m hoping to break a couple of those molds.”

“Even five years ago it was more challenging than it is today to find women in the industry,” Feldman said. 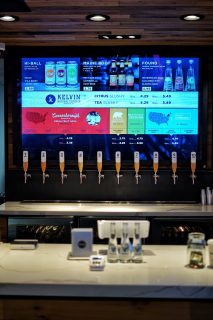 In addition to featuring women, Feldman also wanted geographic diversity among the brands. All the products for sale are American made, but they’re sourced from far beyond New York City, coming from California, Colorado, Florida, Kentucky, Massachusetts, South Carolina, Texas, Vermont, Virginia and Wisconsin. Some, such as Charleston-based Cannonborough Beverage Company and Louisville-based UNIFY are being distributed to New York for the first time through DRINK.

UNIFY bottled water, founded by Joshua Sizemore, was a particularly exciting find, Feldman said. Founded in October 2015, UNIFY sources all of its water from a natural spring in the Appalachian Mountains of Tennessee. Lacking a bottled water for the menu, UNIFY hit almost everything Feldman was looking for from a brand — an American-made premium water line by a budding entrepreneur with a local-minded approach to business.

“I was elated,” Sizemore said. “I think on that corner, inside the American Eagle store, it’s kind of a no-brainer. That’s where our brand wants to be featured. And to be the only premium water in that shop is great for us. We’re already starting to see some new traction from retailers and distributors — it’s all good.”

Feldman even sought out entrepreneurs who weren’t looking for major distribution anytime soon. One prime product available at DRINK are lemon and lavender flavored sugar cubes Feldman discovered for sale on Etsy.

“There is a lot happening on the fringes right now,” Feldman said.

Currently, DRINK’s most popular sales times are around the Broadway show schedules, particularly when matinees exit and in the evenings. One hurdle so far has been that consumers don’t know the bar exists yet, so it has not yet become their destination for morning coffee, something Feldman hopes will change as DRINK announces itself publicly.

Many of the current customers are simply shocked to see this type of bar in a clothing store.

“I’m from Georgia, so something like this in an American Eagle is weird,” customer Viviana Jarmillo told BevNET. “I like it. But I’ve never heard of the brands before.”

To seize on the foot traffic, the bar is also in the process of opening up a walk-up window where pedestrians will be able to order outside. The current aim is to have the window open for the spring. 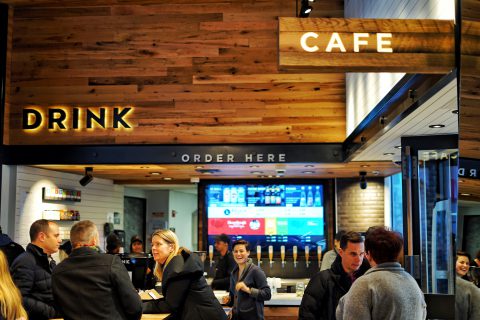 A busy day at DRINK.

The partnership between American Eagle and Cleveland Avenue has been incredibly supportive, Feldman said, and the hope is that if DRINK is a success it can branch out and new locations can open within brick and mortar American Eagle stores across the country.

“The conversation was a true partnership in that it was both of us sort of pitching ideas back and forth,” Feldman said. “And they were very open to anything that would differentiate the experience for their customers. The opportunity to be at this flagship in Times Square is extraordinary, and it’s something we wanted to make sure we did justice to.”