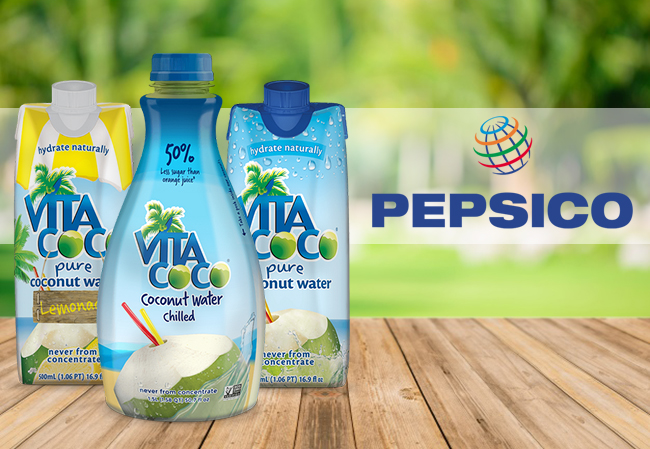 Reuters has reported that PepsiCo is in talks to acquire All Market Inc, the maker of leading coconut water brand Vita Coco. The news follows a report in January that All Market hired investment bank JP Morgan to advise on a possible sale. PepsiCo is offering less than the $1 billion that All Market has sought for the acquisition, according to Reuters, which cited sources familiar with the potential deal.

In an email to BevNET, Jon Banner, PepsiCo’s EVP of Communications, wrote that the company doesn’t “comment on rumors or speculation.” Arthur Gallego, All Market’s Global Director, Corporate Communications, had no comment regarding the news and stated that All Market co-founder and CEO Mike Kirban was unavailable for an interview.

Founded in 2004, Vita Coco holds a 26 percent share of the $2.5 billion global market for coconut water, according to market research firm Euromonitor International. The brand is primarily sold in the U.S. and is chiefly distributed by Dr Pepper Snapple Group (DPS) as part of the beverage giant’s Allied Brands portfolio. Vita Coco is also sold in 29 other countries, including China, where it is distributed by T.C. Pharma, the owner of Red Bull China. T.C. Pharma acquired a 25 percent stake in All Market in 2014 at a valuation of $665 million.

Verlinvest, the Belgium-based private equity firm controlled by the families behind Anheuser-Busch InBev NV, also holds a significant stake in All Market. Rohan Oza, the former vitaminwater CMO and co-founder of venture capital fund CAVU, beverage investor and advisor Ken Sadowsky, and celebrities Demi Moore, Madonna and Matthew McConaughey have equity in the company as well.

News of a potential deal comes approximately six months after PepsiCo bought probiotic beverage brand KeVita for a reported $230 million. PepsiCo hailed the acquisition as “further evidence of PepsiCo’s focus on delivering Performance with Purpose by continuing to evolve our health and wellness offerings to meet consumers’ changing needs.”

An acquisition of Vita Coco would be the third time that PepsiCo has purchased a coconut water company. PepsiCo, which also sells Naked-branded coconut water, bought a majority stake in O.N.E. Coconut Water in 2010 and fully acquired the brand two years later. The investment, however, hasn’t lived up to expectations, as sales of O.N.E. have consistently lagged behind those of Vita Coco and Coca-Cola-owned Zico. PepsiCo also acquired Brazilian coconut water maker and supplier Amacoco, which markets Kero Coco, in 2009.

Although DPS has been a key distribution partner for Vita Coco since 2011, it doesn’t have an investment stake in All Market and has, until its recent purchase of antioxidant beverage company Bai, been reluctant to acquire other key brands in its Allied Brands portfolio. In 2014, DPS CEO Larry Young bemoaned that young entrepreneurs “all want to have the next Glaceau deal,” referring to The Coca-Cola Co.’s 2007 acquisition of Glaceau, the maker of vitaminwater, for $4.1 billion. However, Young ultimately capitulated on his stance last year when DPS’ bought Bai for $1.7 billion.

In February, Kirban told Bloomberg that All Market has spoken to several strategic companies about a possible acquisition and stated that “we talk to quite a few of them regularly.” While he declined to discuss specifics about the annual sales at Vita Coco, he noted that company is profitable and paid a $30 million dividend to investors in 2016. Kirban said he expects All Market to reach $1 billion in sales this year by “owning the coconut in different areas of the store.” In addition to its flagship coconut water, the company sells organic coconut oil, multiserve coconut water and juice blends and the recently launched Coconutmilk, a line of refrigerated products made with coconut water, coconut cream and filtered water.