Later this month, Suja will welcome a prominent new addition to its expanding family of organic health beverage products.

A year after debuting a line of apple cider vinegar-based drinks, the San Diego-based brand will unveil the first offering from its new four-SKU line of organic kombucha at Costco stores in three regions later this month. After launching at Costco with Ginger, a broader release in natural and conventional grocery channels will commence this fall.

Available in 15.2 oz. glass bottles in Ginger, Berry, Peach and Green varieties, Suja Organic Kombuchas are flavored with the company’s cold-pressed juices and contain 5 billion CFUs of vegan probiotics in each. They contain no added natural flavors or extracts. 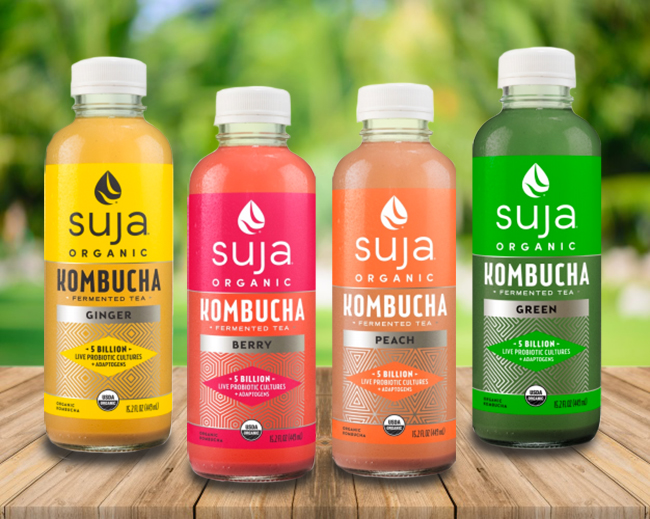 In an interview with BevNET, Suja co-founder and CEO Jeff Church said that the idea to launch a kombucha line had been under discussion for several years, but that the company wasn’t sufficiently comfortable in its ability to provide a safe and reliable product until a confluence of events last November helped to kick the research and development process into high-gear.

Around the same time that probiotic beverage maker KeVita made headlines by funding an independent lab test of several kombuchas on the market that found both sugar and alcohol levels were being significantly underreported, Church received a call from Kevin Jones, a Southern California-based Costco buyer whom had periodically brought innovation ideas to Suja in the past. Jones proposed that Suja develop a kombucha product that Costco could support on a safety, reliability and quality level, and soon after Church’s team got to work.

“We felt like it was the right time to do a thorough analysis [of the category], so we analyzed the different methodologies of making kombuchas, what’s out there and what is not,” said Church. “We really decided eventually to do it because we felt like we could control the sugars and alcohol conversion and we could also bring our own fresh pressed juices to it.”

To ensure regulatory compliance and accurate labeling, Suja uses a proprietary filtration system that filters out remnants of the SCOBY, or the bacterial culture used to make kombucha, after production. In addition, Church said that the product will be sent to an independent third-party lab for alcohol and sugar content testing at the beginning, middle and end of the production run. Sugar levels will vary by SKU; the Ginger variety, for example, contains seven grams of sugar.

“Everything we try to do is reducing the level of sugar that’s in the product and also adding functionality, because that’s what consumers and retailers are telling us they want,” said Church.

Having nailed down the formulation and shared the positive results with Jones and Costco, Suja spent the last six months preparing the new kombucha line for launch. The Ginger variety will be available at Costco locations in the Midwest, Texas and San Diego beginning this month, with further retail expansion, including going national at Target stores, with the complete line set to follow in October.

Upon the product’s launch, Suja, which received a minority investment from The Coca-Cola Company in 2015 and is housed under the company’s Minute Maid division, will join Health-Ade as the second Coke-affiliated kombucha maker. Despite the prospect of competition, Church was confident that both brands are differentiated enough to succeed on their own.

“I think it’s comparing apples and oranges a little bit,” he said. He praised Health-Ade’s flavor profiles and the company’s staff, while noting that Coke did not have any oversight or direct influence over the formulation process. “I think we’ve designed our flavor profiles by taking what we thought were the best kombucha brands — like Health-Ade and GT’s — taking that as our base and then thinking how can we Suja-ize it and do it in a way that’s somewhat unique to us?”

Suja’s kombucha line, which will join probiotic waters, cold-pressed juices and drinking vinegars in its category portfolio, is yet another step in the company’s evolution as a holistic health beverage brand platform.

“Part of what we’ve looked at is building Suja into more of a master brand that isn’t just about juices, it’s more of a total health and wellness beverage company known for clean labels, authenticity, integrity and the idea that what’s on the label is in the product, as opposed to some other brands,” he said. “What kombucha offers is access to the consumer who wants that carbonation as well as that kombucha taste and probiotics,” he added, noting the launch represents Suja’s first foray into carbonated drinks but doesn’t preclude the introduction of a sparkling probiotic beverage or any other bubbly drinks in the future.

As part of Coke’s investment in Suja, the soda giant retains an option to fully acquire the company should it hit certain sales and revenue targets after a three-year period ending in 2018. Yet Church played down the notion that the kombucha launch was designed to add another revenue stream with an eye on next year’s potential acquisition.

“We’ve got to be heads down and business-as-usual,” he said. “We’ve been building value in the company since even before Coke was involved. The rest will handle itself, hopefully.”