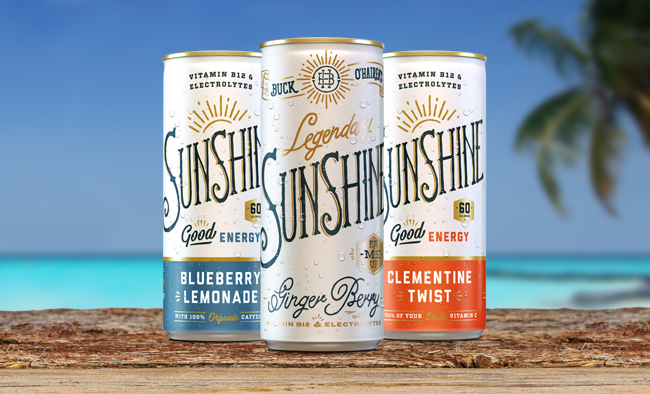 When Sunshine Beverages began as a side project in 2014 at North Carolina ad agency The Variable, their team of pro marketers had little idea how to actually build an energy drink from scratch.

As brand development experts, the agency had the data to show that consumers were seeking better-for-you energy drinks and beginning to move away from the more “extreme” branded, high sugar products. Using that as inspiration, a team of staff, including The Variable’s chairman Keith Vest and chief creative officer Joe Parrish, began reaching out to industry consultants and developing ideas for a premium alternative energy drink that aligned with the trends they were tracking in the marketplace.

The result was Sunshine, a three-SKU line made with ginger root extract and marketed as “good energy.” Available in Blueberry Lemonade, Clementine Twist, and Ginger Berry flavors, each SKU contains 50mg of organic caffeine, B vitamins and electrolytes for hydration.

“As millennials were starting to get married and have their first kids, there was this recognition that the demographic was really starting to seek a more dialed-back path to energy,” Vest, who also serves as CEO of Sunshine, told BevNET. “Coffee and tea are the more traditional ways to get energy in the afternoon, not necessarily to skateboard across the Grand Canyon. That was what the core idea began as.”

According to Vest, Sunshine’s took a deliberately slow pace to its initial retail launch, as the company sought to develop a presence on grocery and convenience store shelves in the Piedmont Triad region of North Carolina before shipping across state lines.

Recent investment in the company from Teall Investments, also based in North Carolina, is fueling plans for expanding distribution in the near future. In June, Teall acquired a majority stake in Sunshine Beverages, with Teall partner Lizzie Ward joining the company as president. Financial details of the investment were not disclosed.

“With the little bit of traction we’d been having in the marketplace, we decided it was time to bring on the first round of investment with Teall to allow Sunshine to be treated as a truly independent company, bring on employees, and really start the accelerated growth plan for next year,” Vest said. 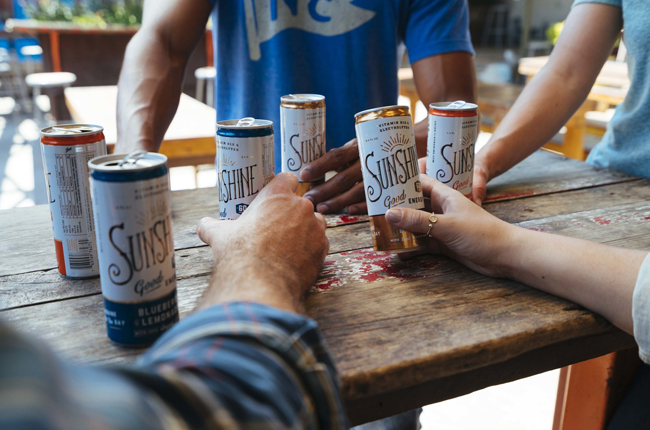 According to Vest, the Teall investment, which wasn’t announced until last month, has allowed the Sunshine team to grow to 10 employees and expand distribution into Southern retailers such as Food Lion, Harris Teeter, and Ingles.

Ward, who has previous beverage industry experience in strategic marketing at The Coca-Cola Company, is now shaping the company’s mindset and approach to market, Vest added.

“I think some of the other businesses Teall are invested in are focused on this next generation of consumers and seeing what those trends are and what they’re looking for,” Ward said. “In looking at Sunshine, they saw the demand and that it was only going to continue to grow with millennials, and Gen Z even moreso, seeking better-for-you products.”

According to Vest, Sunshine is working to begin another investment round which will likely be announced at the end of Q1 2018.

Retailing at $2.29-$2.59 per 8.4 oz can, Sunshine is set to grow its distribution footprint further south into more than 1,500 grocery stores, 800 convenience stores, and various independent retailers by early 2018. The focus is now on pushing into the entire Southeast, with active expansion into South Carolina, Virginia, Georgia, and Alabama.

The company is also gaining placement in craft breweries, a move Ward said is focused on embracing the “craft culture” that speaks to Sunshine’s target millennial demographic.

“For us, we want to win in the states that we’re going after and the retailers that we’re in support that with marketing and create a repeatable model so we know we can scale,” Ward said.