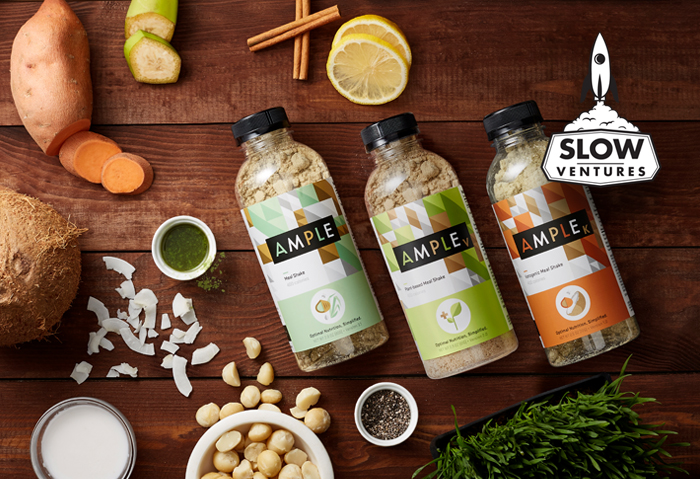 Ample, also based in San Francisco, markets a powdered ready-to-mix meal replacement shake, pre-packaged in PET bottles, that is sold exclusively through its website.

The new investment, announced on Tuesday, brings total funding for Ample to $4 million since launching via crowdfunding platform Indiegogo in May 2016 and becoming the site’s top-funded nutrition project of all time, with over $370,000 raised. Ample raised an additional $1 million in June 2016 and $800,000 in May 2017 from angel investors including 500 Startups, Hawkshead Capital and Compound.

Slow Ventures, founded in 2009, has previously invested in a variety of digital-based companies, including Pandora, Slack and mattress maker Casper. It has also backed third-wave coffee roaster and retailer Blue Bottle Coffee and recently participated in an $8 million fundraising round for 82 Labs, makers of hangover detox shot Morning Recovery.

“We’re excited to be part of Ample’s mission to help people take control of their nutrition in a convenient way across a range of food lifestyles,” said Scott Marlette, a partner at Slow Ventures, in a press release. “Ample is leading the industry with a level of quality, honesty and convenience that is in line with where nutrition will go in the next 20 years.”

Speaking with BevNET, Ample CEO Connor Young explained that the personal connection between investors and Ample was a critical foundation in the deal. Almost all of the brand’s current investors also use the product, he said.

“That was important because it means they understand the consumer, the use occasion and the problem we are solving,” he said.

Young said that Slow Ventures did not take a seat on the company’s board of directors as part of its investment, but that the company would potentially look towards expanding its senior leadership team, specifically in marketing and operations roles.

Since its initial success on Indiegogo, Ample has moved into a permanent office in downtown San Francisco and added two new SKUs: Ample V, which targets vegan consumers, and Ample K, aimed at keto dieters.

“My philosophy from the beginning has been there’s no one-size fits-all approach to nutrition,” said CEO Connor Young. “If we wanted to achieve mission, which is to simplify optimal nutrition, we’d need to make multiple different products that fit the various lifestyles and needs of customers.”

Young said Ample will use the new funds to support product development and adding staff to the company’s food science department, as well as for consumer education initiatives around nutrition.

Unlike Soylent, another well-funded meal replacement maker from Northern California that also launched exclusively online, Young said the product margins prevent Ample from moving into retail distribution at this point. He added that the company can establish direct relationships with consumers and better understand its audience through ecommerce sales, which grew 94 percent over the past 12 months, according to the company.

“I’d rather have less people love us than more people just like us,” he said.