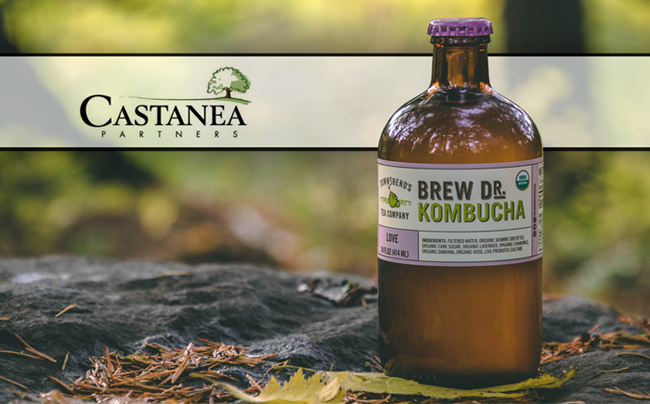 Terms of the deal were not disclosed. Tom First, operating partner at Newton, Mass.-based Castanea Partners and a co-founder of Nantucket Nectars, will join the board of directors. Castanea has previously invested in beverage brands such as Essentia Water and craft brewery The Bruery.

Aside from $1 million in private equity from a local investor in 2015, The Townshend Group has been built primarily on bank debt, including $7 million of debt financing used to open the company’s 50,000 sq. ft. brewery in 2015.

In an interview with BevNET, Townshend Group founder and CEO Matt Thomas characterized Castanea Partners’ investment as an opportunity to simultaneously add liquidity and talent to the company as its brands, specifically Brew Dr. Kombucha, continue to scale.

“There’s so much opportunity, I really wanted to partner with a group that I felt like was just going to help us execute and add another arrow in the quiver in terms of giving us the best shot at distributing and selling all this kombucha we are taking on the debt to grow to make,” he said. “It kind of came down to, in terms of executing on the sales and distribution side, I felt like Tom was going to add the most value.”

First praised Thomas and Brew Dr. Kombucha for creating a corporate infrastructure aimed at supporting growth. “We were really impressed with the brand and product quality and what he’s built from a size perspective, but we were most impressed with Matt and the team and how thoughtful they are about building the foundation for something that has the ability to really scale,” he said.

The funding, which Thomas characterized as “very minority,” is for liquidity rather than growth capital.

“Instead of facing on using a private equity relationship to fund growth, my frame of mind shifted to ‘we have gotten to a point where we probably earned the right to put some money in the bank,’” Thomas said, noting this is the first time he has done so. “We were either going to provide my personal liquidity through available debt and have the company buy back some of my ownership. But it just felt like having a partner at this point would up our game internally and it’s a chance to add some real talent to the board.”

The funding will also be used to pay back the original group of investors, mainly comprised of family and friends, who supported The Townshend Group when the company launched its first tea house in 2003. They will remain as minority owners. “[The investment[ is a chance for me to put some money in the bank and to do the same for my mom and aunts and uncles and people like that,” Thomas said.

In broader terms, Thomas said the relationship with Castanea will help Brew Dr. achieve its ambitious goals for expansion. After 153 percent growth for the brand in 2017, Thomas is targeting 100 percent growth this year and $50 million in revenue. He pointed to First’s entrepreneurial experience with Nantucket Nectars as an asset, as well as having an East Coast-based partner as the brand pushes into new markets in the region.

“We are looking to achieve a lot of growth over the next couple years out East, and Tom and his team really like to get to work helping connect distribution relationships and stuff like that,” he said, adding that Castanea was helping Brew Dr. in its search for a new chief financial officer. “It really felt like Tom, in terms of just who I’m going to add to my board, was the best get.”

Outside of Brew Dr., both First and Thomas noted the opportunity for The Townshend Group’s other brands to develop further. Thomas said he has “big plans,” including potentially a ready-to-drink product aimed at grocery stores, for Townshend’s Tea Company, a tea retailer with 9 locations in Oregon, Montana and Utah.

To meet growing demand, Brew Dr. has taken on an additional $10 million in bank debt for expansions and upgrades to its brewery. By moving product to a third-party cold storage facility, the plant has freed an additional 8,000 sq. ft. for fermentation tanks, tripling its existing capacity. A second, 9,000 bottle-per-hour bottling line has been added, with the existing 5,000 bottle-per-hour line set to be upgraded to 13,000 bottles-per-hour. Thomas also said he recently put a down payment on a second spinning cone column, the machine which Brew Dr. uses to remove alcohol content from kombucha, which should be ready by Q3 or early Q4. “We feel like we can absolutely produce over $100 million in revenue within our current footprint, just given that added fermentation space,” he said.

Thomas added that, as the company grows to the point where it may consider exit options, “having a partner like Castanea is going to come in handy.” He added, however, that he would try to “put that off for as long as I can.”

“I have very high aspirations for this brand and I want to be involved in all of it,” he said.