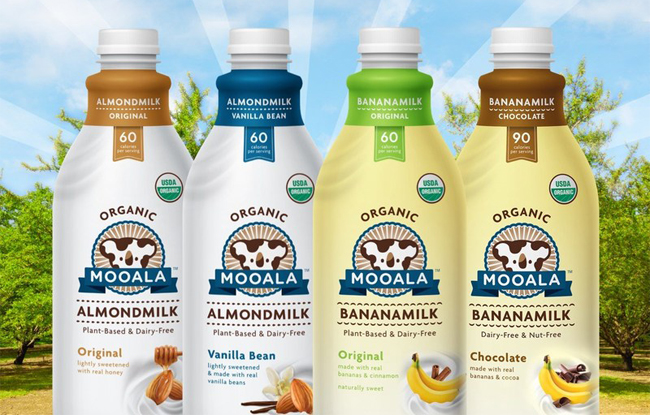 Fresh off a new round of capital funding, non-dairy milk brand Mooala is launching at over 800 stores in the East Coast in a move that nearly doubles its nationwide distribution footprint to 1,500 total stores.

The Dallas-based brand has been primarily sold in the Southwest at retailers such as Whole Foods, Costco, Wegmans, Stop & Shop and Albertsons. The move into doors on the East Coast represents a 40 percent increase in the existing U.S. presence for Mooala’s Bananamilk and Almondmilk lines.

“We are thrilled about Mooala’s growth on the East Coast,” said Mooala founder and CEO Jeff Richards in a press release. “It’s important that families who are nuts for Mooala don’t have to drive to another zip code to find us.”

Along with Wegmans, ShopRite and Ahold stores are now stocking Mooala products in 10 states and the District of Columbia. The brand’s organic Bananamilk and Almondmlik lines, sold in 48 oz. multi-serve bottles, are also now available at Giant and Stop & Shop stores in Maryland, Virginia, West Virginia, Pennsylvania, Delaware, New Jersey, New York, Connecticut, Massachusetts and the District of Columbia.

Mooala, founded in 2016, is one of several plant-based dairy startups that has attracted investor interest amidst the rapid growth of non-dairy milk alternatives. Earlier this month, the company announced it had raised $5 million in equity capital led by M3 Ventures and Sweat Equities.

The company stated the new financing will be used to support the new distribution in the Northeast, as well as expansion in the Southwest and Midwest.

Roughly one year after launching its canned sparkling mixers line, craft cocktail mixer brand Powell & Mahoney has announced the two SKUs will be launching at Target stores nationwide next month.

The two varieties — Ginger Beer and Sparkling Mojito — will begin appearing on Target store shelves across the country in March. The suggested retail price for a 4-pack of 12 oz. cans will be $5.99.

“Target’s commitment to offering outstanding value, continuous innovation, and exceptional experiences aligns with our mission to offer quality and innovation at a value added price,” said Powell & Mahoney co-founder and CEO Mark Mahoney in a press release. “This new opportunity allows our brand to continue to meet the nationwide demand for craft cocktail mixers.”

Krista Lumley, Brand Manager for the Búcha Live Kombucha brand commented, “We are so excited to be growing together with Ingles. They are a world class retailer, and we have found that consumers in the Southeast have some of the highest demand for the Búcha brand per capita throughout the US.

In a press release announcing the partnership with Ingles, Búcha Live brand manager Krista Lumley praised the grocery chain. “They are a world class retailer, and we have found that consumers in the Southeast have some of the highest demand for the Bucha brand per capita throughout the U.S.,” she said.

Búcha Live, which launched as shelf-stable in February 2017, is available at over 2,000 retailers.

Plant-based protein drink OWYN (Only What You Need) has secured national placement for its ready-to-drink products at specialty nutrition retailer Vitamin Shoppe.

The expansion, which began in early February, was among several pieces of news the company reported to BevNET.

In addition to securing placement in Vitamin Shoppe, which operates over 700 stores in the U.S., OWYN has also entered 13 Whole Foods Market stores in the New York City market.

In other distribution news, infused rose water line H2rOse is now available at Gelson’s Grocery Stores in Southern California. The retailer, which operates 28 locations in the region, will carry all four varieties of H2rOse: Apple, Peach, Mango and Wild Berry.