In the second part of Natural Product Expo West 2018 recap, we examine some of the news, new products and innovations in tea, energy drinks, soda, juice, drinking vinegars and waters.

Foreign blends, cold brew, and new types of functionality were some of the motifs running through tea innovation at Expo West 2018, as established brands rolled out new flavors and new brands sought to enter the iced tea sector.

BOS, a South African brand of rooibos teas, had its Expo West debut, announcing that the company recently launched at Sprouts locations nationwide in February. With strong sales in South Africa and Europe, CEO Dave Evans has high hopes for success in the U.S., announcing operations have been moving “full steam ahead” since the launch. 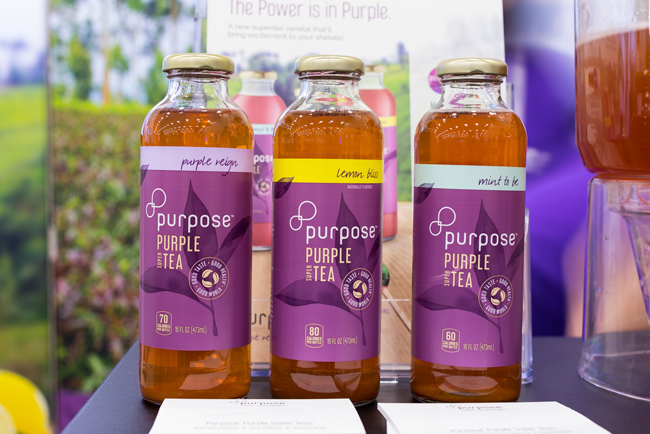 Zevia is getting in on tea with a stevia-sweetened USDA Organic certified tea. The line include black, green, and hibiscus teas and will retail for $1.99 per 12 oz. can.

“One of the things for brands is having that discipline to know when to create new lines, when’s the consumer ready, when’s the retailer ready?” said Zevia CEO Paddy Spence, adding that Zevia’s recent new products including mixers have shown strong performance since launching in the last year. “Why doesn’t anyone make a sweetened tea that’s natural with no calories? It’s a no-brainer.”

Sparkling water brand Spindrift is introducing its own take on the classic “half & half,” made with black tea, sparkling water and fresh squeeze lemon juice.

But new functionalities are debuting as well. Buddha Teas previewed an upcoming cannabidiol (CBD) Matcha Tea alongside turmeric and peppermint vanilla flavors. The company said CBD fit into the brand’s health-forward focus, making the trending anti-inflammatory a strong addition to the brand.

qīī (pronounced ‘chee’) debuted with an even more unique approach to functionality — oral hygiene. With low calorie Oolong and Green Tea flavors, the brand purports to aid dental health by cleaning plaque with all natural tea and XyVita, a trademarked formulation containing xylitol which reduces acidity and the risk of tooth decay. The brand is also developing three new flavors.

As seen at Expo West, the drinking vinegar category is expanding as brands look to capitalize on consumers’ increasing awareness of gut health.

In terms of apple cider vinegar (ACV), brands at Expo West continued to focus on ways to make the ingredient more palatable to mainstream consumers, and packaging vinegar into a potent shot is one way to do that. Vermont Village, which showcased its line of vinegar shots at Expo East 2017, shared three new additions to the line at Expo West: Daily Detox, which contains activated charcoal, Green Energy, with matcha, and Beauty Boost, made with collagen. Ethan’s also extended its family of ready-to-drink ACV shots with three new flavors: Beet, Blueberry and Tart Cherry.

Sonatural Juices, a Portuguese juice brand that is preparing to enter the U.S. market, shared its new line of cold pressed fruit juices infused with 5 percent ACV in each bottle.

Elsewhere, while it did not debut any new SKUs at the show, Wildbrine revealed that it would be reducing the price of its Probiotic Live Shots line from $3.99 to $2.99. 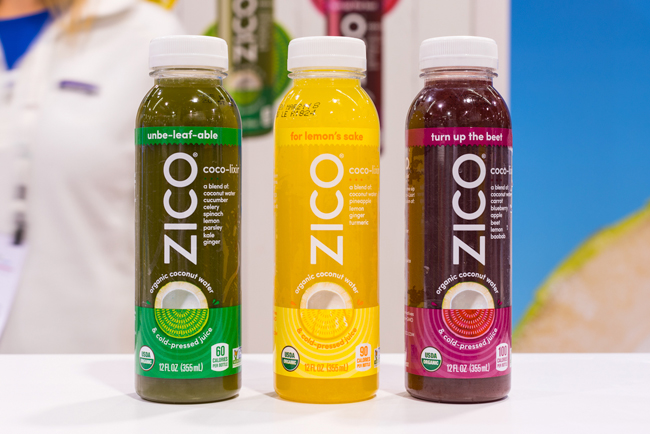 While many brands known for juice have begun branching out into other categories, coconut water Zico is buying in with a line of “Coco-lixirs” made with cold-pressed juice and coconut water. Utilizing VEB stablemate Suja’s proprietary juicing tech, the flavors include green juice blend “Unbe-leaf-able,” ginger and citrus forward “For Lemon’s Sake,” and fruit and veggie rich “Turn Up the Beet.” The line ranges in calories from 60 to 100 per 12 oz. bottle and is USDA Organic certified.

Coffee maker La Colombe is also dipping its toes into juice with a Frothed Orange Juice product. Comparing the product to Orange Julius, the canned beverage includes coconut cream and is caffeine free. Currently testing in La Colombe cafes, the drink was intended as a kids option for parents visiting the company’s cafes. If it succeeds the line could be sent out into retail.

Suja, which has been innovating outside of the juice category for some time, is one of several juice makers who are looking to the shot format to find new growth in the cold-pressed arena. The company previewed an in-development line of juice shots aimed for launch this spring, featuring immunity and natural energy properties. Planned to debut at a “more disruptive” price point of $2.99 per shot, the line will make its debut in Costco.

Companies such as Vive Organic, KOR Shots, and JUS by Julie also were present at the show with juice shots, reporting promising growth in the sector. Ginger Shots debuted a new sub-brand, Tulua, which will market a turmeric forward shot and an apple cider vinegar shot, giving the ingredient-named company a chance to expand beyond ginger products.

Daily Greens is seeking to better define use occasions, launching a “Morning Greens” line of probiotic juices intended to be consumed with breakfast. The flavors include Pineapple with Spinach and Mint, Orange with Spinach and Lemon, and Grapefruit with Kale and Vanilla. The products will retail between $3.99 and $4.99 per 12 oz. bottle. According to the company, Daily Greens has seen increased distribution and placement in Costco has helped to improve brand awareness with consumers in the past year. 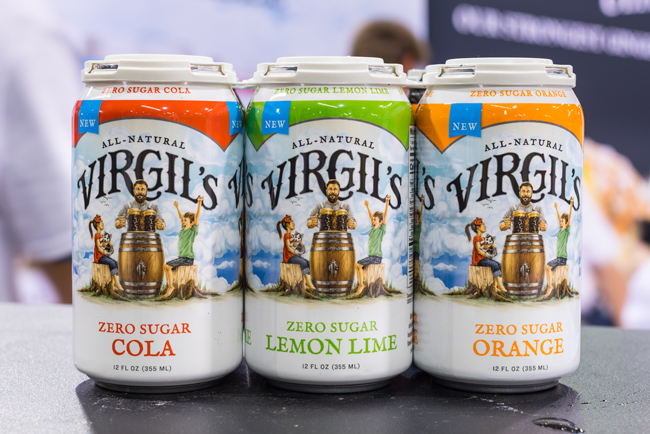 After taking the helm from founder Chris Reed, new Reed’s CEO Val Stalowir has set the company on a course correction, beginning by bringing the company’s key soda brands into the 21st century. At Expo West, the company relaunched Virgil’s Soda with updated packaging and a new sugar free line to provide zero calorie offerings. The move will be followed this summer with a rebranding of Reed’s Ginger Beer.

Live Soda introduced its zero calorie probiotic line at the show, which plays into the brand’s portfolio of functional kombucha and drinking vinegar products. Wave Soda announced it had increased direct store distribution (DSD) in Los Angeles and is planning to launch in Northern California soon. Dry Soda sampled its previously announced sugar-free line, ahead of a spring launch.

Sipp is entering the sparkling water space with a new line scheduled for a June launch. The line includes Lemon and Grapefruit flavors.

Coconut water may no longer be a new player in the category of plant-based hydration, but brands at Expo West showed that there is still ample room for innovation within the space.

Two of the category’s most successful brands — Zico and Vita Coco — exemplified this approach. The former, which has previously been exclusively shelf-stable, debuted its first ever flash pasteurized coconut waters, available in original and Pineapple Mango flavors in 400 ml and 1L formats. Vita Coco shared its newest SKU: coconut water made with fresh pressed coconut, giving the liquid a more coconut-forward taste and somewhat more complex mouthfeel. 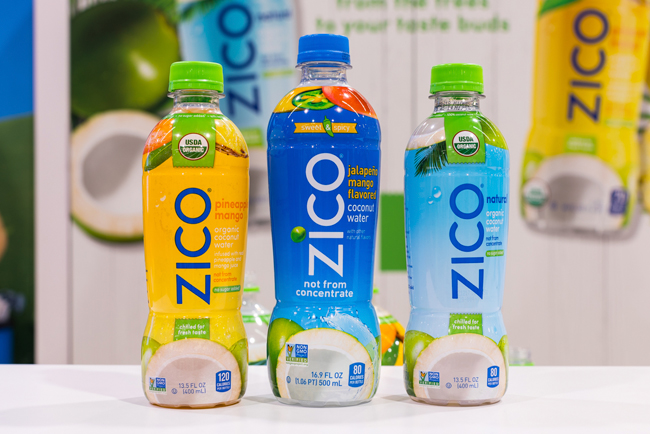 Pure Brazilian displayed two new package sizes — a smaller 7.5 oz. format, priced at around $2.29, and a 1 L bottle — which will be released in June and July, respectively, at their booth. The bottles will also feature a slightly changed label design that highlights its artisanal production process. The company announced it would be launching in Target locations this summer as well.

In other plant-based waters, aloe vera drink brand ALO, which introduced a coconut water blended with aloe at Expo West 2017, shared a new coconut water, aloe and watermelon juice blend packaged in a 500 ml Tetra Pak. The Maple Guild also showcased Tapt, a revamped version of its maple water-based fitness drink. According to the company, the new name and packaging is designed to better reflect the product’s positioning as a functional water; using nutrient-rich maple water as its base, it is also enhanced with vitamins, electrolytes and green tea extract. Drink Maple, meanwhile, rebranded itself as Drink Simple.

Steaz, a longtime player in the natural refreshment category, also shared samples of its Prickly Pear Water, which was previously marketed as Cactus Water.

In pursuit of the “clean energy” sector, brands from across categories continue to innovate in the energy space. Tea brand Matchabar and plant-based hydration company Zola both announced new energy lines at the show. Matchabar launched a canned line promising energy from matcha and green tea extract. The line will retail for $2.99 per can and have its consumer-facing launch at the Coachella music festival in April.

Last year, Zola debuted a hydrating energy drink line made with coconut water. Now the company is adding a new low-calorie Sparkling Energy Water line to complement. The line includes Pink Grapefruit, Blackberry Cucumber, Blood Orange, and Lemon Lime flavors and will be available in June with an SRP of $2.49 per 12 oz can.

MATI Energy launched in 1,000 new stores, including Harris Teeter, Kroger’s, Sprouts, Shaws, Fresh Market, and Earth Fare. The company recently saw a change in leadership after the departure of founder and CEO Tatiana Birgisson. Board member Lauren Whitehurst took the CEO position in January. The company is currently focused on building out its placement in the Southeast region.

Runa unveiled five new flavors including unsweetened Mint Strawberry and Watermelon and lightly sweetened Pineapple, Mango, and Pomegranate. The company will enter 100 Shaw’s stores in April and has begun distributing with Dora’s Naturals in the New York metro area.

New product innovations within the bottled water category at Expo West 2018 may not have been as prominent as those in other categories, but there were some new developments.

Icelandic Glacial used the show to introduce three new flavors in its sparkling water line which will be in stores next month: Tahitian Lime, Sicilian Lemon and Elderflower. 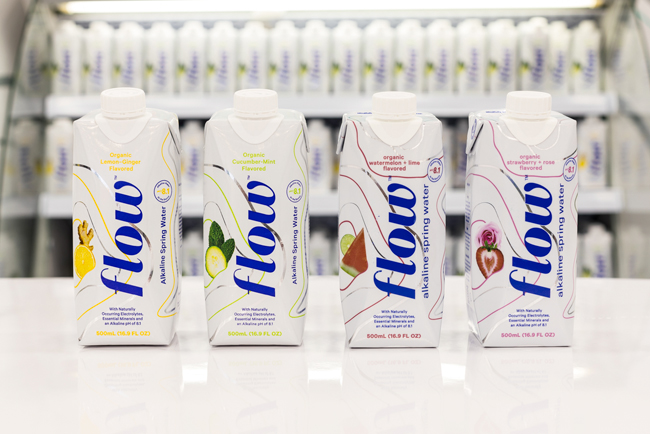 Looking to give bubbly water a stronger functional call out, Limitless Coffee & Tea showcased its new six-SKU line of sparkling waters infused with 35 mg of caffeine per 12 oz. can. Available in Grapefruit Hibiscus, Lemon Lime, Blood Orange, Watermelon, Cucumber Pear, Lemon Lime and Ginger Mint flavors, the line is set to debut in stores in April.

CORE Organic, the antioxidant-infused flavored water line from CORE Hydration, also looked towards greater functionality with the infusion of shelf-stable probiotics. Along with two new flavors — Cherry Berry Lime and Orange Mango — the brand is also introducing a 6-pack of 30 oz. bottles for the CORE Hydration line of balanced pH waters.

Products with call outs to functional benefits span across almost all beverage categories these days. However, as seen at Expo West 2018, there is a growing subset of functional drinks built around specific ingredients, such as adaptogenic herbs.

REBBL, which markets a line of plant-based elixirs and protein drinks, shared several new products. 3 Roots Mango Spice joins Schizandra Berries and Cream in the brand’s elixir line, while Banana Nut Protein, made with Brazil nuts, is the latest addition to protein line.

Cannabidiol (CBD), a non-psychoactive compound sourced from cannabis, is a natural ingredient with functional benefits which has enjoyed increasing attention from food and beverage brands. Tree Below Zero shared its new natural sparkling juice drink infused with 25mg to 100mg of CBD per bottle.