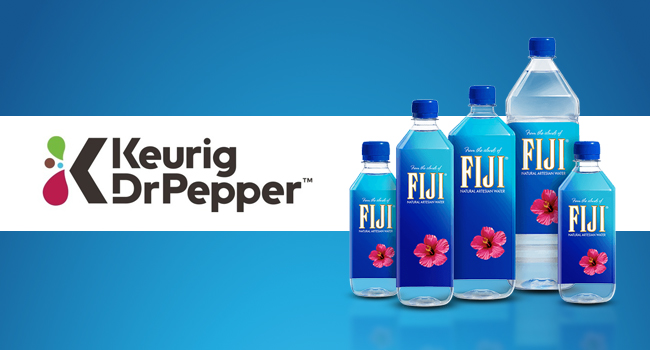 Premium bottled water brand Fiji will discontinue its distribution partnership with Keurig Dr Pepper, effective October 1, the company announced today. The brand will take control over much of its distribution and plans to build out a direct store delivery (DSD) network supported by its parent The Wonderful Company.

In an email to BevNET, Fiji VP of marketing Clarence Chia said retail partners will experience “a significant improvement in customer service” with the transition. According to a press release, the company plans to leverage a 300 member sales and merchandising team to improve customer relations and provide “concierge level” customer service. Existing distributor relationships will remain unchanged.

“As part of The Wonderful Company, we’re very much focused on vertical integration,” Chia wrote. “It’s a model we believe Fiji Water can embrace and benefit from greatly. Handling more of our own product delivery is an integral part of that strategy.”

Chia told BevNET that the split is “a direct result” of the merger between Dr Pepper Snapple Group and Keurig Green Mountain, which closed yesterday, but did not comment further.

Fiji had long been a part of Dr Pepper Snapple Group’s (DPS) allied brands portfolio, but unlike stablemates like High Brew and BodyArmor, the soda giant did not have a financial stake in the company.

The split, however, comes amid rumors that further changes could be coming and that Body Armor in particular may be on the market. Wells Fargo Securities analyst Bonnie Herzog suggested last week that The Coca-Cola Company may be interested in purchasing the sports drink, stating she “doesn’t think the new KDP management team is interested in maintaining minority stakes.”

The $18.7 billion merger, which was announced in January, brings Dr Pepper Snapple Group under the umbrella of JAB Holding Company. The new conglomerate is the seventh largest food and beverage company in the United States and anticipates annual revenue of approximately $11 billion.

In January, it was reported by BevNET that DPS’ Allied Brands would be given the opportunity to exit ahead of the merger, although most of the entrepreneurs reached said they did not anticipate leaving due to a lack of suitable alternatives. The DPS distribution network reaches 70 percent of the U.S.

Keurig Dr Pepper did not return requests for comment.