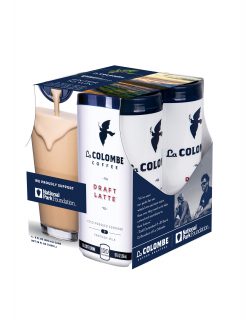 PHILADELPHIA — La Colombe Coffee Roasters, leader in third-wave specialty coffee, beverage innovator and ready-to-drink coffee disruptor, is proud to announce a donation of at least $100,000 and year-long commitment to the mission of the National Park Foundation (NPF), the official nonprofit partner of the National Park Service.

La Colombe shares the passion and responsibility to protect and preserve our country’s natural, cultural, and historical treasures so that generations to come can also appreciate the beauty and history of the United States. As part of this partnership with the National Park Foundation, La Colombe will donate 5 cents to NPF for every specially marked Triple and Vanilla Draft Latte can sold – cans available for limited time only.

“Growing up in the Northwest, I’ve spent the bulk of my time hiking, trekking, and traversing our national parks. I’ve hiked Mount Rainier over a dozen times. Just last year I took my family out to Yellowstone so my kids could enjoy what I’ve grown up loving,” said Todd Carmichael, La Colombe’s CEO and co-founder. “Here at La Colombe we value adventure, exploration, and nature, and are incredibly proud to partner with the National Park Foundation.”

No stranger to travel and the great outdoors, La Colombe’s CEO and Co-Founder Todd Carmichael, is the first American to make a solo trek across Antarctica to the South Pole, on foot unassisted and unaided, capturing the World Speed Record. His near-death adventure was the subject of an award-winning documentary entitled “Race to the Bottom of the Earth” (2010), which aired on the National Geographic Channel. In addition, Carmichael hosted Travel Channel’s Dangerous Grounds, where his globetrotting adventures in search of the finest coffees in the world are captured on video.

“Enjoy your coffee even more now knowing that it supports America’s treasured places,” said Stefanie Mathew, vice president of corporate partnerships at the National Park Foundation. “Partners like La Colombe not only contribute much-needed financial support, they also inspire more people to discover the many ways they too can help care for national parks.”

In addition to the financial contribution, La Colombe hot coffee cups in cafes nationwide will also be rebranded during the year, highlighting different pieces of artwork inspired by national parks. La Colombe will also host, in partnership with like-minded brands, three travel sweepstakes where a winner will have the opportunity to bring a friend on a trip of a lifetime to Acadia National Park, Yellowstone National Park, and Joshua Tree National Park.

Learn more about the National Park Foundation’s mission and enter to win a trip of a lifetime to one of our country’s most treasured national parks at www.lacolombe.com. Fans and followers who post photos on social media using #KeepAmericaWild will be in the running to win a year supply of Draft Latte.

La Colombe (www.lacolombe.com) is a leading coffee roaster known for ethical, long-term trade practices with growers. Considered one of the pioneers of the third wave of coffee, it provides signature classic blends and exceptional single-origin coffees to cafés, hotels, restaurants and retailers around the world. In addition, the company owns and operates 30 cafés in Philadelphia, New York, Chicago, Boston, Los Angeles and Washington, D.C. – with additional locations and new markets scheduled to open in 2018. The company has also made headlines in the ready-to-drink business with its DRAFT LATTE(™) – the world’s first-ever textured cold latte.

About The National Park Foundation