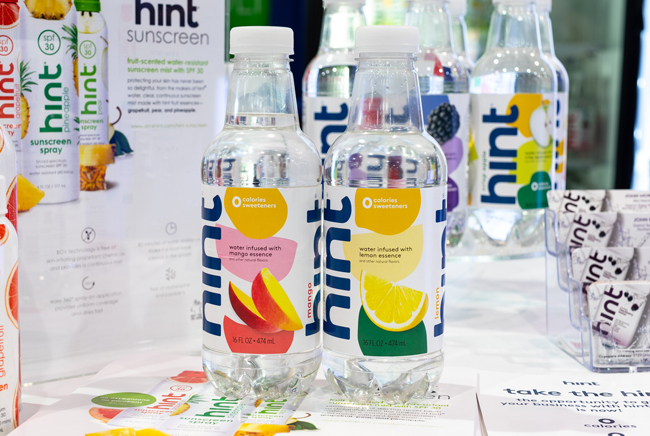 Speaking to BevNET, Hint COO Theo Goldin said the brand had tried in the past to develop a standalone mango variety, but had struggled to capture the proper flavor profile — leading the company to release a Mango Grapefruit flavor instead. The new flavor will not replace the Mango Grapefruit.

The company also showed a new label design across the portfolio. In changing from its current current sleek plastic label to a textured paper label, Goldin said the new look is intended to resonate more with millennial consumers and communicate “the fun of drinking Hint” with “a more tactile feel.”

The new innovations comes as Goldin explained that Hint is close to doubling its sales this year, as many retailers have been requesting end-of-year promotions which could potentially push the brand across the threshold.

While much of Hint’s business to date has been in grocery and e-commerce, the convenience channel is a target growth space for the company, he said, The brand is currently in about 1,000 c-stores nationwide and maintains a low all-commodity volume (ACV) by design, Goldin said, but that if the company chooses to grow its ACV next year they will focus on improving same store sales. 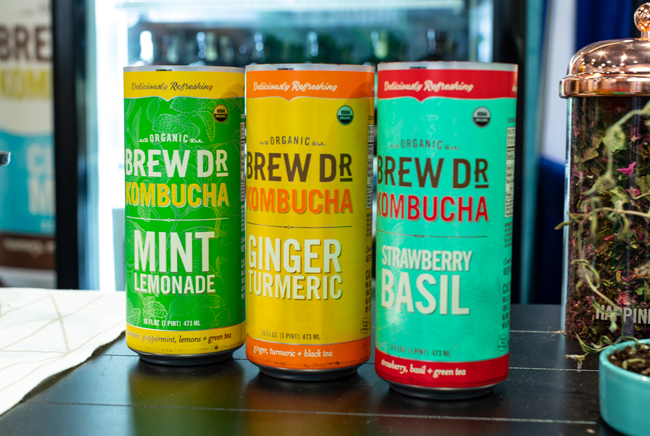 After launching three flavors in 4-packs of 12 oz. cans at Whole Foods in June, Portland, Ore.-based Brew Dr. Kombucha is now looking to build in C-stores with a channel-exclusive 16 oz. can. The cans will be available in three flavors — Mint Lemonade, Ginger Turmeric and Strawberry Basil, the brand’s seasonal release from last year that is now part of its permanent lineup. They will be sold as single cans and in 4-packs starting in January, with initial launched focused on the company’s backyard in the Pacific Northwest. Reps indicated that the brand is targeting a $3.99 price point for the new cans.

New category entrant KOE Kombucha, which launched earlier this summer exclusively in 12 oz. cans in five flavors, is also making cans a key component of its C-store channel strategy. For more on KOE, including a conversation with Jared Smith, Director of Sales, Stratus Group, stay tuned to BevNET’s NACS coverage this week.

CBD beverages were not allowed on the show floor at NACS 2018, but that didn’t stop functional beverage company New Age Beverages from unveiling a new line of CBD products, set to launch this fall with a wider release next year, during an invite-only gathering at a nearby hotel suite. The company shared several new CBD-based product lines, including CBD Tea, CBD WTR, and CBD Shot by New Age. Each is infused with 25 mg of hemp-derived, full-spectrum CBD per serving.

Speaking with BevNET, New Age CEO Brent Willis said the company acted early to secure trademarks on “CBD Tea” and “CBD WTR,” giving the brand a leg up over competitors in the emerging space for cannabinoid products with clear and direct brand names. Willis said he hopes the new products will attract attention from investors who are interested in playing in the cannabis industry. The company will work to expand the line’s reach nationwide through major retailers and distributors, dependent on the passage of the current U.S. Farm Bill which includes provisions to greenlight CBD sales across the country.

“The way we see it, would you rather invest in a cannabis company that can source the products, or the brand that can reach consumers through 400,000 retailers?” Willis told BevNET.

Willis noted that through size and volume the company was able to beat or match most current market prices for CBD beverages.

Although the products are not finalized and were not displayed during the showcase, New Age is also developing a line extension of RTD CBD coffees under its Marley Coffee brand.

The publicly traded company made some buzz last month when it announced its interest in CBD products, seeing its stock price jump 575 percent to $7.85 in under a week and peaking at $8.95 on October 1. The price has since proved volatile, with The Motley Fool earlier this week noting the company’s interest in the cannabis space is nevertheless speculative, remarking that “New Age would almost require a partner of Coke’s caliber in order to grab a significant slice of the burgeoning CBD market.” On Thursday, however, the same publication suggested that New Age may already have scored a win as the increased visibility has potential to boost the company’s existing portfolio of brands such as Coco Libre, Bucha, and Xing Tea with both investors and retailers. 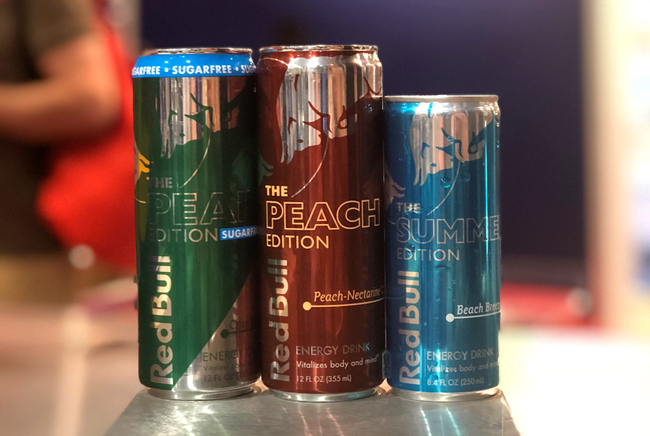 As Red Bull debuted several new flavors at NACS 2018, the iconic energy drink brand’s decision to shift a handful of its most successful flavored SKUs into its 8.4 oz. can format underscored its desire to balance innovations that appeal to loyal consumers with efforts to continue bringing new consumers into the category.

“We’ve grown significantly since 2015, and we think that an opportunity for growth that we’ve not capitalized on enough is infrequent users, female users, and maybe even people who have never tried an energy drink,” he said. “You’ll be seeing more emphasis on the 8 oz. format and what it could do for us in that infrequent or non-buyer space in terms of expanding the overall reach of the category.”

Red Bull hopes that the White Edition can replicate in 8.4 oz.cans the kind of success it experienced upon launching in as the brand’s annual Summer Edition seasonal flavor earlier this year. The flavor — like previous Summer editions — is now part of the brand’s permanent lineup, a move that Showalter characterized as “the fastest we’ve ever made a decision to go full-time.” The brand hopes next year’s Summer Edition — the tropical themed Beach Breeze — can continue upon that success when it launches on April 29, 2019.

The new Summer Edition will complement the launch of two new flavors — Peach Edition and Pear Edition Sugar Free — in January. Showalter described those two flavors as “really big white spaces” for the brand that align with consumers’ taste preferences in other beverage categories. This month, the brand will also be offering a limited-edition can honoring the classic arcade game PAC-MAN, available in 8.4 oz. single serve, 4-pack and 12-pack options. At Red Bull’s NACS booth, the brand showcased the collaboration with a special PAC-MAN arcade unit featuring a built-in fridge.

Finally, Showalter offered an update on the brand’s organic Simply Colas line, which were soft launched in San Diego County and parts of North Carolina last year. He noted that the company is still in a “learning phase” with the line and is moving at a deliberate pace to while gathering insights.

“We are letting it be a laboratory environment as opposed to a sales metrics environment,” Showalter said.

Red Bull’s future plans do not, however, include a price increase, as reported by Wells Fargo analyst Bonnie Herzog. 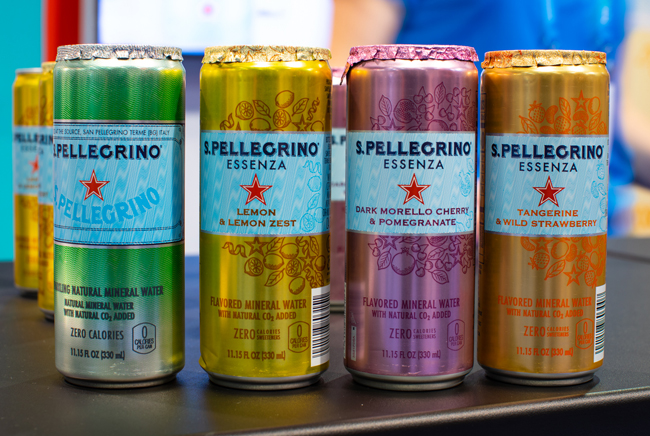 As consumers continue to steer away from carbonated soft drinks and sugary beverages, low- and zero-calorie sparkling waters stand to be one of the beneficiaries of that shift. Both new entrants and established players in the category shared a variety of innovations at NACS.

Two of Nestle Waters’ most recognizable premium imported water brands — S. Pellegrino and Perrier — each showcased new lines that embrace fruit flavors. The former shared samples of Essenza, a four-SKU line of naturally flavored essence waters (Dark Morello Cherry, Pomegranate & Lemon, Lemon Zest, Tangerine & Wild Strawberry, and Original) packaged in 11.2 oz. slim cans priced at $1.49 each, as well as in 8-packs. The line has been softly rolled out since August, with national expansion slated for end of January 2019. Meanwhile, Perrier’s new innovation for next year is its new juice-added line of sparkling waters, available in three flavors (Peach & Cherry, Pineapple & Mango, and Strawberry & Kiwi). Each 8.5 oz. can contains 13-17 percent juice and 45-60 calories per 8.5 oz.slim can, depending on the SKU.

The growth opportunity in sparkling water has given brands multiple angles with which to attack. Mexican soda brand Jarritos shared Naturagua, its new line of naturally essenced sparkling waters. Packaged in the same 12.5 oz. glass bottles as its sodas, the line — available in flavors like peach, pomegranate and mandarin — recalled Coke’s premium sparkling import Topo Chico in some ways. Elsewhere, Polar showcased a variety of playful seasonal seltzer flavors — Hibiscus Cloudberry and Vanilla Zen — in 12 oz. cans that are due to launch in November, as well as SKUs like “Minotaur Mayhem” and “Pixie Lights” in its kid’s line, Seltzer Jr., which is sold exclusively in 6-packs of 8 oz. cans.

Confirming a successful first eight months on the market, Bubly, PepsiCo’s much-hyped zero-calorie sparkling water line, shared both new flavors and new packaging. Early next year, the brand will debut three new SKUs — Strawberry, Cherry and Mango — and a 20 oz. PET bottle that will carry a suggested retail price of $1.49.