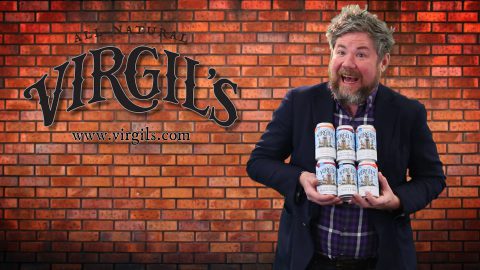 NORWALK, Conn. — Reed’s Inc., owner of the nation’s leading portfolio of handcrafted, all-natural beverages, today announced it has enlisted 12-time Jeopardy champion and New York City bartender, Austin Rogers, to represent its all-natural line of Virgil’s Handcrafted Sodas. Rogers, who became a viral sensation during his 2017 winning streak on the iconic quiz show, will represent Virgil’s and its newly launched line of Zero Sugar products in the company’s upcoming marketing campaign, at trade events, and on social media.

Reed’s began the search for their new “Virgil’s Genius” in April, with the launch of a nationwide contest, whereby applicants submitted videos describing why their own personal brand of genius would best represent the Virgil’s brand. Virgil’s is the smarter beverage choice and the new Zero Sugar line and has been described as “pure genius” by those who have had the product. Rogers was selected from a list of 20 finalists—with fans voting through the company’s Instagram, @DrinkVirgils.

“For me, this all started when a friend of mine noticed I looked a lot like the new character on the front of the Virgil’s bottles,” said Rogers.

When Reed’s announced their search for a spokesperson, Rogers began a guerrilla campaign on Facebook and Twitter, rallying his fans to support his efforts to land the job. He even began showing up outside of trade shows, concerts, and anywhere he could find a crowd.

“I have always loved Virgil’s craft sodas, but once I had a chance to try the new Zero Sugars, that was it, I was hooked. I’ve always been a fan, but these guys have really cracked the code and created a great tasting, all-natural sugar free soda—this stuff is my kind of genius,” Rogers said.

“We were really happy with the response we received to our Genius Contest,” said Val Stalowir, CEO of Reed’s Inc. “We were impressed by the wide variety of “genius submissions” we received. However, in the end, Austin and his fans hit us like a tsunami and won in a land slide. Austin and his loyal fans showed so much passion and enthusiasm for the brand, creating viral videos, and showing up everywhere we went, that we had no doubt he would be the perfect person to represent Virgil’s and get our message out that it is time for America to trade up to a smarter soda.”

Unveiled earlier this year, Virgil’s Zero Sugar can be found nationally at most Target and Kroger stores, at select Costcos and in numerous grocery, specialty and natural food retailers across the country. Available in 12oz. cans, Virgil’s Zero Sugar is available in six flavors, including Root Beer, Black Cherry, Vanilla Cream, Cola, Lemon Lime and Orange. The company’s proprietary blend of all-natural, zero sugar sweeteners delivers unbeatable taste without the artificial chemicals and preservatives found in most mainstream sodas.

Established in 1989, Reed’s has sold over 500 million bottles of its category-leading natural, handcrafted beverages. Reed’s is America’s #1 selling Ginger Beer brand and has been the leader and innovator in the ginger beer category for decades. Virgil’s is America’s #1 selling independent, full line of natural craft sodas. The Reed’s Inc. portfolio is sold in over 30,000 retail doors across the natural, specialty, grocery, drug, club and mass channels nationwide. Reed’s Ginger Beers are unique to the category because of the proprietary process of hand brewing its award-winning products using fresh organic ginger combined with natural spices and fruit juices. Reed’s Ginger Beers come in three levels of increasing ginger intensity that deliver a delicious and powerful ginger bite and burn that only comes from fresh ginger root. The Company uses this same handcrafted approach and dedication to the highest quality ingredients in its award-winning Virgil’s line of great tasting, bold flavored craft sodas. Virgil’s is also available in an all-natural line of great tasting, zero calorie, zero sugar flavors.