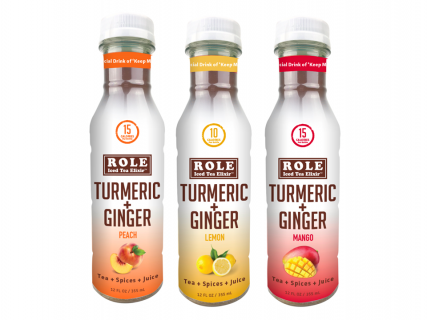 SPRINGFIELD, Va. — Ditching added sugars has been a goal for Role Tea since launching December 2016. But for a brand whose mission is to provide better for you drinks to everyday, health conscious consumers unwilling to compromise on taste, finding a palatable natural sweetener solution has been a challenge – at least until now. Role Tea is converting its line of functional spiced, iced tea elixirs to a proprietary naturally sweetened with no added sugars. The change comes just in time for July placements into several new grocery and pharmacy accounts including Wegmans and Hy-Vee.

“None of the naturally sweetened, no added sugar beverages on the market had a taste we could live with. That has kept us skeptical about ever being able to go no added sugar across the board. But we’ve kept up with innovations in the sweetener market and feel like we’ve cracked the code,” stated Role Tea CEO/Co-Founder Mike Johnson.

Role Tea began experimenting with the now endless combinations of various stevia leaf options, monk fruit and erythritol back in February. They ultimately landed on a proprietary blend of erythritol and stevia leaf extract. Role Tea converted their lemon, peach and mango flavors, previously sweetened with cane sugar, honey and monk fruit to the no added sugar sweetened versions with their June production run. All of Role Tea’s blends will now contain 2 grams or less of sugar from 100% juice concentrates and 10 to 15 calories per bottle.

After spending the bulk of 2017 self-distributed to less than 30 locations in the Washington DC Metro area including select Whole Foods, Role Tea has garnered the attention of Wegmans, Hy-Vee and Hometown Pharmacy (a pharmacy chain based in Wisconsin). With nearly 400 locations between these three chains, Role Tea was adamant about starting these locations with their improved offering which was not easy.

“With finalizing formulations and production, we pulled off months’ worth of work in weeks. It was tough but we’re really excited to introduce our best product to date to Wegmans, Hy-Vee and Hometown from the start,” Role Tea Co-Founder Koray Benson added.

Existing locations will transition to the no added sugar blends over the next few months.

With added sugar completely removed, Johnson is excited about all of the new opportunities to come.

“Role Tea is now a viable option for a growing number of people adopting low carb or ketogenic lifestyles as well as diabetics. These people prefer some sweetness but they have little interest in drinking sugar even in small amounts,” Johnson said.

If early taste tests are an indicator, Johnson has even more to be optimistic about.

“Many every day consumers feel like you have to compromise taste when you make the choice to eat and drink better,” said Johnson. “We’re on a mission to show them that you don’t have to compromise. Most who have tasted our new blends were shocked when we told them there was no added sugar in what they had just drank. That’s exactly the reaction we are going for.”