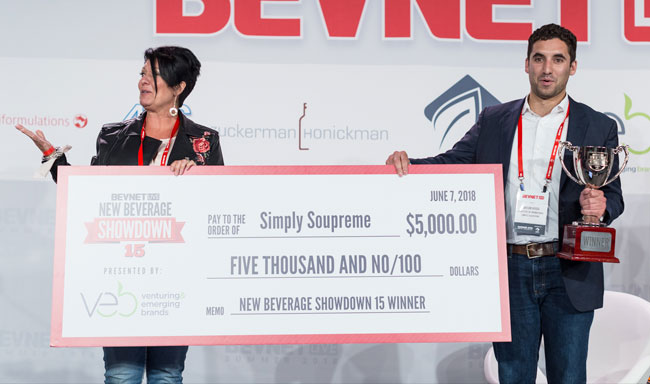 The company took the crown from a group of five other innovative early stage beverage brands — NITRO Beverage Co, Sip City, Cusa Tea, Drink Peloton and Element Shrub — participating in the final round of the Showdown.

Simply Soupreme is premium, ready-to-drink soup brand. All nine SKUs are dairy-free, gluten-free, carrageenan free and contain no additives. Jackie Greene, the founder and CEO of Simply Soupreme, said she launched the company to produce the highest quality and freshest soup to help people across all nutritional lifestyles.

“I’m so excited,” Greene said. “I was filled with disbelief and just didn’t see it coming.”

In the final round, each participant had five minutes to win over a panel of judges comprised of John Craven, CEO of BevNET; Gigi Lee Chang, managing partner at BFY Capital; Paula Grant, founder of Flood Creative; and Jim Murphy, VP of strategy and venturing at Coca-Cola’s Venturing and Emerging Brands division.

On stage, the judges praised Simply Soupreme for its taste, innovative flavor combinations, bold colors, health-centric brand story and embracement of trends like convenience and plant-based. However, there were questions surrounding whether its sleek but down-scale style fit its $8 per bottle price point.

“The price point was definitely a topic of conversation,” Lee Chang said. “There is a parallel with the cold-pressed juices and the smoothies when you start out the price is typically higher but then as you get scale and as the category grows eventually you are able to lower your price so we felt that had already been proved out and that she could get there.”

Overall, the judges praised all six finalists for the functionality and taste of their beverages, while offering constructive criticism regarding branding and design. They urged the entrepreneurs to better highlight the positive attributes of their products, as well as their story and other differentiating qualities, through more concise, welcoming and clear design.

“They were all beautiful packs but they needed to work harder in terms of communicating that functionality,” Grant said while on stage.

In the end, Simply Soupreme edged out the competition for its innovative take on the growing drinkable soup category. Lee Chang said the judges felt that the simplicity of the brand was different than anything else currently on the market.

“With some of the others, it felt like the opportunity or the change was too incremental and really micro so it didn’t feel like it was different enough,” Lee Chang said.

Greene said she will use the $5,000 in cash to make design changes to the label, as the judges advised, to be more clear and concise and “remove the guesswork” for consumers. Greene also won an advertising package valued at over $5,000.

Before getting to work, however, Greene said she’ll be celebrating her victory with a big glass of rosé Champagne.