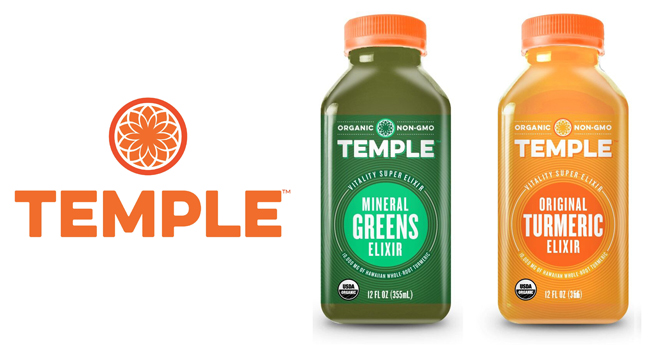 At Natural Products Expo East 2018 in Baltimore this week, the Brooklyn, N.Y.-based elixir maker will be reintroduced as Temple, as the company seeks to evolve from a turmeric-centric brand into a broader functional beverage company. Speaking with BevNET, Dunn’s River Brands co-founder and Temple President Ian Knowles, who took over leadership of the brand in April, cited the difficulty of being tied to a single ingredient as a key reason for the rebrand.

“It’s very difficult as a brand to be acutely associated with one ingredient,” Knowles said. “Fundamentally you’re going to be subject to the ebbs and flows of trends, no matter what brand you are. So when you align with a single ingredient source, you put yourself at risk of enhancing that volatility. So right now we’re focusing on adaptogens and high-functioning organic ingredients that we can build into our products.”

Knowles said the rebrand is part of Temple’s natural maturation and that the focus is to “radiate vitality” through the branding. He added that the redesigned packaging was intended to stand out on the shelf as unique and elegant. Temple has amassed a niche but loyal following with a 75 percent repeat purchase rate, he said, but the brand’s goal is to now broaden its appeal and to draw market share from the energy space.

“We’re casting a wider net with this rebrand,” Knowles said. “One thing we determined early on is we didn’t want to be a niche brand. In beverage it’s very difficult to operate as a best kept secret…. We think that there’s a much greater opportunity above and beyond a very tight knit group of wellness-oriented consumers.”

To reach those consumers, Temple is expanding beyond turmeric with a sparkling Vitality Supertonics line which will premiere at Expo East.

The Supertonics are available in 12 oz cans in four organic SKUs featuring adaptogens and green coffee-sourced caffeine. Flavors include Blood Orange Mate, Ginger Turmeric, Tamarind Tulsi, and Watermelon Ginseng, all of which will retail for $2.49 per unit. According to Knowles, the products are intended to bring out the functional health benefits of adaptogens and offer Temple a path into the clean energy drink category. 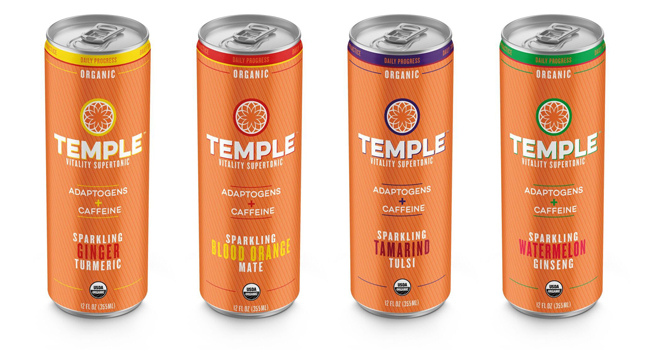 The Supertonic line is Temple’s first shelf stable product and will allow the brand to open up DSD networks to grow its distribution, Knowles said. The company will also increase its ecommerce business, adding subscription services to its website and selling the line on Amazon.

According to Knowles, the brand’s Pure Prana Shots line, which debuted last year, is one of Temple’s best performing products. The shots will receive a packaging update, as well as the addition of a new SKU, Matcha, which will roll out to stores later this year.

The formulation of Temple’s existing products have not changed, however the brand has discontinued its 32 oz format products and has dropped its Coconut Elixir and Pure Mega Turmeric Elixir products, which Knowles said were not resonating with consumers.

“We feel strongly that Temple has an incredible market opportunity in front of us,” Knowles said. “This is a brand and a story that can resonate with a lot of people. And as the consumer is trying to find a way to balance everything in life. Though we do have technologies that are making some things simpler we’re living in a more complicated time than humans have ever lived in, and with that comes stressors. We’re trying to address need-states in the market that aren’t being addressed right now.”