In the first of BevNET’s multi-part recap of the major beverage category trends, new products and news from Natural Products Expo West 2019, we examine how dairy producers are rallying around grass-fed products and the rise of collagen-infused drinks. We also take a look at how leaders and upstarts in the coffee space are building their brands around plant-based milks (led by oat milk) and a balance of refrigerated and shelf-stable offerings. 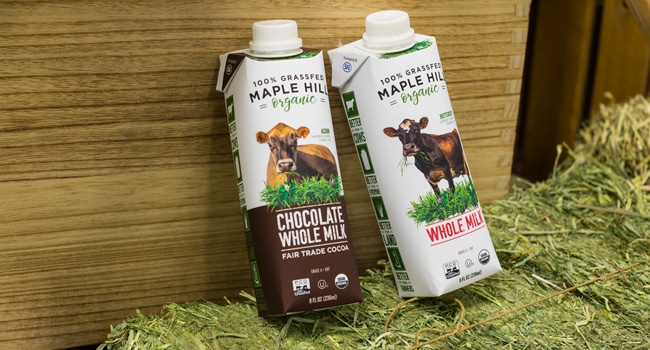 As plant-based alternatives have risen, the dairy category has suffered at its expense. But at Expo West, dairy producers Organic Valley and Maple Hill Creamery turned to innovations in grass-fed milk products to offset those declines.

Last month, the two companies partnered to launch the Certified Grass-Fed Organic Livestock Program, a certification seal for grass-fed products which debuted during Expo West. Grass-fed dairy is currently outpacing the rest of the category, growing at a 30 percent rate despite conventional milk declining 10 percent, according to data from Organic Valley. Speaking with BevNET at the show, Organic Valley VP and director of innovation Meenakshi Trehan said the seal was necessary to create a quality standard for the space.

Under the program, dairy cows must be exclusively fed a grass diet and given a sizable area of pasture for grazing. At least 60 percent of the cow’s food must come from pasture over a 150-day grazing season to qualify. National Organic Program standards only require a ratio of 30 percent and 120 days, according to Organic Valley.

“All of our innovation is about understanding consumers and grass-fed is a huge, huge space,” Trehan told BevNET. “We want to make sure we are making it easier for consumers to know — they don’t want to be fooled.”

Organic Valley’s Grassmilk line extensions, launched during Expo West, include both homogenized and non-homogenized whole and 2 percent milk fat varieties, which are available in half gallon multi-serve containers; Half & Half creamer available in a 16 oz multi-serve container; raw cheddar and raw sharp cheddar cheeses; Plain and Vanilla flavored yogurts for adults; Strawberry and Blueberry yogurt cups for kids; and Strawberry and Bananaberry flavored yogurt tubes for kids.

“Fluid milk is fading, you can see declines in that business,” Trehan said. “From an innovation standpoint we are making milk more relevant. That is the agenda which we have for our team, how do we drive relevancy with milk. I think about a lot of categories that have done that and milk is at that juncture where we’re going to do that. Whether it’s more benefits, or meeting consumer needs through different forms and packs.”

In addition to the Grassmilk line, Organic Valley is also launching a line of milk fortified with protein and calcium, as well as a ready-to-drink protein drink called Fuel. 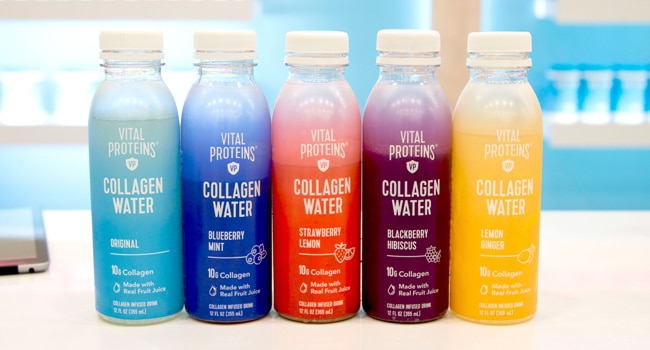 Collagen — an animal-sourced protein which is purported to reduce skin aging, build muscle, burn fat, and aid in gut health — has long been a popular ingredient in powdered beverages. But, as seen at Expo West 2019, the ingredient is poised to become a bigger presence in ready-to-drink beverages this year, with several brands announcing collagen-based line extensions.

Vital Proteins, which produces powdered collagen mixes, launched its first foray into RTD with Collagen Water and Collagen Shots. The functional waters are available in Blackberry Hibiscus, Blueberry Mint, Lemon Ginger, Original, and Strawberry Lemon varieties. Each 12 oz bottle contains 10 g of bovine-sourced collagen and 60 calories or less, depending on the SKU.

But Vital Proteins was far from the only company bringing in collagen: plant-milk latte maker Pop & Bottle showcased a collagen-infused addition to its oat milk latte line that will begin rolling out to stores in May. Australian premium coconut water maker Coco Luxe also showcased collagen-infused varieties.

“I knew collagen was going to be an enormous trend,” Coco Luxe founder and CEO Jodie Evans told BevNET at the show, noting that she hopes to bring added growth to the coconut water space with functional innovations. “I needed something beyond different flavors.”

Bulletproof, which is expanding into more than 20,000 retail accounts over the next two-to-three months, has made collagen a central piece of its expanding brand platform as the ingredient has become more popular with consumers. The brand announced a new caramel flavor in its line of collagen-infused cold brew coffees during the show.

“We have retail customers in the middle of the country, in Iowa, in chains that are doing well,” said Anna Collins, president and COO of Bulletproof. “If it is doing well and continues to expand into chains in places like Iowa then that is a super positive signal.” 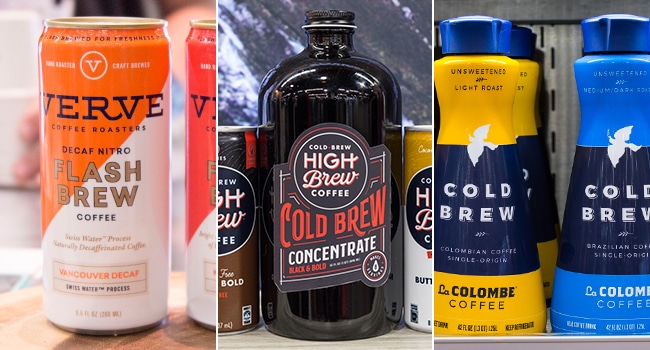 With ample growth on either side of the divide, some of the larger coffee brands at Expo West 2019 sought ways to develop a balanced portfolio of both shelf-stable and cold-chain products. But regardless of whether they require refrigeration, product innovation in the category appears to be driven primarily by the growing demand for non-dairy coffee options.

Thanks to its line of shelf-stable 8 oz. canned cold brew, High Brew has enjoyed the benefits of distribution via Keurig Dr Pepper’s national DSD network. Over the last several years, the Austin, Texas-based company has introduced several innovations to the line, including sparkling and protein-infused iterations. At Expo West, the brand showcased three new lattes made with plant-based milk. The flavors — Toasted Coconut, Bourbon Vanilla and Smoked Butterscotch — each feature a combination of cashew and coconut milk and contain 100 calories and 9 g of sugar per can and are priced at $2.99. Slight tweaks to existing offerings are happening, too: the brand’s non-dairy Black & Bold flavor is now sugar-free, while Milk Chocolate joins the lineup of protein-added coffees. Beyond cans, High Brew is also moving into the cold case with a refrigerated 32 oz. multi-serve concentrate in a single unsweetened flavor: Black & Bold.

While others have looked towards non-dairy milks, much of the success La Colombe has experienced in the RTD market has included dairy, in the form of its shelf-stable Draft Latte cans (aside from a single SKU with coconut milk). However, the company hasn’t turned a blind eye to the rise of oat milk within the coffee world. At Expo West, La Colombe EVP Kyle O’Brien said oat milk draft lattes — already on tap at the company’s cafes (and at its booth) — would be introduced into the RTD line sometime this summer. Before that, however, the brand is focusing on the next additions to its cold brew shandy line, Cherry and Grapefruit. Available in 9 oz. cans, the new SKUs will launch at Whole Foods in the first week of April.

The Philadelphia-based coffee brand is also making the jump into grocery coolers with a refrigerated multi-serve cold brew. Packaged in a 42 oz. bottle which takes design inspiration from Chemex coffee makers, the coffee is cold-filled and available in two varieties: Brazilian medium/dark roast and Colombian light roast. O’Brien said the line will have an SRP of $5.99 and will being rolling out into retailers like Harris Teeter and Wegmans over the coming weeks.

Like its RTD coffee competitors, Chameleon Cold-Brew has been active and responsive in adapting to shifts in the category. Expo West 2019 was no different; at the brand’s booth, Chameleon founder and CEO Chris Campbell shared samples of several new innovations in both dairy and non-dairy products. This summer, the brand will begin rolling out a line of whole milk dairy lattes (a slightly revision of the 6 oz., 100 calorie lattes showcased at Expo East 2018) in two flavors: Original and Cinnamon Dolce, the former clocking in at 70 calories and 6 g of sugar per 8 oz. can and the latter at 110 calories and 12 g of sugar. Unlike the lattes from last year’s Expo East, the new cans ditch the reference to “frothed milk” and the instructions to “shake to froth” on the front of the package. Along with the lattes, which will feature Organic Valley whole milk, Chameleon will also feature non-dairy SKUs in shelf-stable cans, starting with Black and Churro, which Campbell explained is a more approachable and intuitive naming convention for Chameleon’s slightly sweet Mexican cold brew.

And while Chameleon is still carrying the flag for dairy, it isn’t ignoring the rise the plant-based alternatives. In late April, the brand will launch an organic oat milk and cold brew coffee blend in Original and Dark Chocolate flavors. Aimed at grocery cold cases, the 48 oz. multi-serve bottle contains 120 calories and 9 g of sugar per 12 oz. serving. Campbell said the product will debut in Whole Foods next month, followed by entering Target stores in May.

Leaning into on-the-go consumption, both KonaRed and Kitu Life shared a look at their new shelf-stable canned coffees at Expo West. The former, known for its coffee fruit-sweetened cold brews, showed off its lightly sweetened three-SKU line of Kona blends available in Vanilla Latte, Cafe Mocha and Espresso flavors that each clock in at 90 calories per 8 oz. can and carry a suggested retail price of $2.99. Elsewhere, Kitu Life (formerly Sunniva) introduced Super Espresso in 6 oz. cans, a further extension of its “Super Coffee” trademark. Available in Original, Vanilla and Caramel flavors, each contains three shots of espresso (180 mg caffeine), 5 g of protein, and MCT oil. While keeping the brand within its better-for-you, zero-sugar guidelines, Super Espresso gives Kitu a play into smaller format grab-n-go energy space.

Along with their respective new innovations, KonaRed and Kitu each provided a bit of star power to the show as well. New York Jets quarterback and Southern California native Sam Darnold held court at KonaRed to mark his joining the company as an ambassador and investor, while Patrick Schwarzenegger, the son of Arnold and a budding investor in his own right, was on hand at the Kitu Life booth to help founders Jordan, Jake and Jim DeCicco hand out samples.

Among the other notable coffee news at the show, New Jersey-based Bizzy Coffee confirmed to BevNET it is no longer producing its line of 2 oz. cold brew shots, pivoting instead to focus on the home preparation market with a multi-serve concentrate in PET bottles that will enter retailers such as Target and Walmart this year priced at $8.99. Elsewhere, Los Angeles-based roaster and retailer Groundwork Coffee shared a look at its newest RTD product in cans: a dark roast named Bitches’ Brew. The new SKU will be introduced in Sprouts in May.

Finally, Verve Coffee, which bucked the cold brew trend with its nitro-infused “Flash Brew” RTD line that debuted in TK, shared a spate of new innovations, including the single origin Kenya Giakanja and Vancouver Decaf, a rare non-buzzy entry into premium coffee. Verve co-founder Colby Barr spoke in-depth with BevNET about the new products, as well as its own experiments with plant-based milks, in a video interview that will be published on the site later this week.