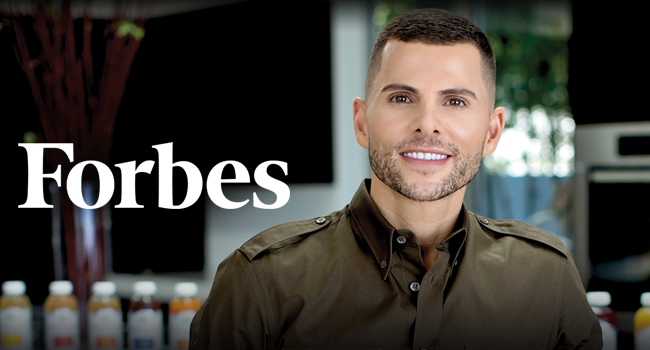 When it comes to kombucha, GT Dave is certainly the biggest dog in the pack. So when he appeared to take a few conspicuous swipes at some of his company’s rising competitors in a recent magazine article, the industry took notice.

In the article, published on May 9, Dave, the founder and CEO of GT’s Living Foods, sat down with Forbes reporter Chloe Sorvino at his Beverly Hills mansion for a deep dive into the making of his kombucha empire. The story and the accompanying video featured Dave musing on a wide swath of topics, ranging from growing up in L.A. to the fallout of the 2010 Whole Foods fermentation recall debacle to his insistence on not skimming out yeast and bacteria from his products (“This is what the customer wants,” he noted).

However, it’s Dave’s pointed comments about two of his chief rivals for category dominance, namely KeVita and Health-Ade, that have generated the most reaction within the industry in the days since the article was published. Having been “instrumental in allowing (the category) to be what it is,” Dave told Forbes kombucha was in now in danger of “slowly being killed by all the noise and all the success.”

According to the article, Dave cited Health-Ade as an example of a brand that has “bastardized” kombucha by pushing its flavor profile too far towards the mainstream. “You know what they are?… Cherry-berry. Tropical punch… [they] make it basic, make it mainstream.”

“If your claim to fame is that you’re in amber bottles, or you’re three cool hipsters behind this product, and that’s it?” Dave said. “Your days are numbered, in my opinion.”

That comment — which could easily be interpreted as a reference to Health-Ade — sparked that company’s co-founder, Daina Trout, to respond via social media earlier this week. In a LinkedIn post, Trout wrote it was a “disappointment to read wildly inaccurate and below-the-belt comments” by Dave in the Forbes story. Naturally, users commenting on the post fueled a further taking of sides on issues related to kombucha formulation, investment, pricing and more. Dave himself weighed in on the post, briefly; the responses have since been removed.

Speaking with BevNET last week, Health-Ade co-founder Diana Trout said she was “disappointed” and “surprised” by such a direct callout of her brand.

“I think it’s safe to say if anybody was in my position they would probably be disappointed,” she said. “Competition is the best sign of a category that has legs. To me, it’s really a good thing.”

Trout said Dave’s comments in the article were “out of the blue,” noting that both of their brands have been “pretty active” in Kombucha Brewers International (KBI), a California-based industry trade group. “The last two years have been healthfully competitive and very professional,” she said.

Trout also defended Health-Ade against accusations, made in the since deleted posts, that the company had hired away talent from GT’s Living Foods. She denied that the company has ever employed someone who previously worked at GT’s outside of manufacturing positions. Ramon Canek, a former vice president and COO at GT’s Living Foods (formerly Millennium Products), served as chief product officer at Health-Ade from 2014 to 2019.

“Our breweries are four miles away from each other and we both run manufacturing plants,” she said. “So it is a small community even though L.A. is huge. There will be people who come into interviews that have worked for manufacturing companies in L.A. because we are looking for people with experience. Maybe we’ll see one or two (people) from GT’s — that’s not going to be enough for me to say they can’t come in the door.”

Trout also countered Dave’s claims that Health-Ade was “killing the category” with excessive promotional pricing. He told Forbes: “Right now, you can go and buy a Health-Ade for 99 cents because they offer a coupon here and a coupon there, and you can stack the coupons.”

“Our promotions are exactly what companies are supposed to be in beverage,” Trout said in response. “There is an expectation from the store level on having promotions — you can’t even get into certain accounts without having a 16 week rotation. We do that. It would not be a sustainable business if we spent more.”

She continued: “It’s a little ironic. Everybody is doing the same thing in beverage and in kombucha — including him.” 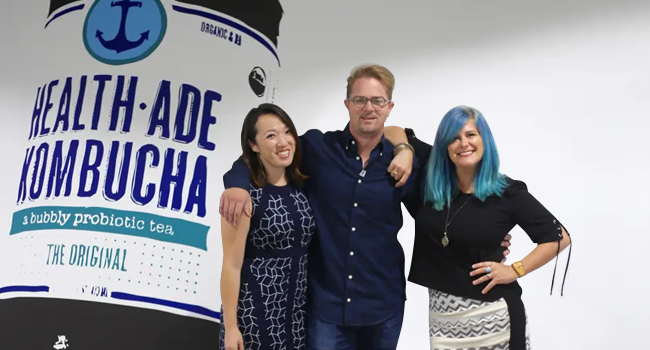 The conversation also turned towards the topic of corporate independence. In the Forbes story, Dave — the sole stakeholder in his $900 million company — claimed to have turned down multiple investment opportunities in order to maintain control of his brand and specifically his formula. “I’m not for sale,” he said.

In the midst of LinkedIn exchanges on Trout’s post, Dave was critical of Health-Ade for an alleged lack of transparency in its affiliation with The Coca-Cola Company. In 2013, the kombucha maker received investment by First Beverage Group, which includes Coca-Cola’s Venturing and Emerging Brands (VEB) unit as a limited partner.

“The biggest misinterpretation is that somehow that investment or any of our investments by default somehow means you’ve bastardized the values or qualities that you hold,” Trout said. “I feel like doing it in glass jars, making it with cold pressed juice — these are all things that make it kind of a pain in the ass to make Health-Ade. That’s precisely the thing we haven’t caved on even four years into the relationship.”

In the story, Dave also criticized PepsiCo-owned KeVita for labeling its Master Brew line as kombucha despite the use of artificial carbonation, tea flavoring and lab-grown probiotic strains. “If you want [a drink that’s] clear and consistently sparkling with no vinegar flavor, that’s called carbonated flavored water. You can get it for 99 cents at the thrift store,” he told Forbes.

In response to a request for comment on the article, KeVita marketing VP Aidan Kingerlee told BevNET in an emailed statement that the company is “proud of our KeVita Master Brew Kombucha.” Kingerlee did not address any of the specific allegations mentioned by Dave in the article, but reiterated the company’s commitment to taste, accessibility and product safety.

For his part, GT told BevNET that his own reaction to the Forbes profile was mixed. He called the piece a “typical Forbes article” in its emphasis on financial performance and valuation and in labeling him a “billionaire,” while also noting his distaste for the headline “Tempest in a Tea Bottle.” He was more positive about the article’s accompanying video, in which he said he was “allowed to speak in complete sentences and thoughts and statements.”

“Financial journalists typically like to talk about the good — the entrepreneur, their passion, their journey, the impetus behind their creation — but at the same time, they like to throw some controversy in the mix, whether it’s in [the form of] lawsuits or category decline or competition,” he said. “So this is not the first time I’ve seen that, but you never really get used to it.”

Dave said he didn’t believe that the reporters questions were out-of-bounds or inappropriate. However, he said he was misquoted and took issue with the way in which his quotes were edited; “It’s almost like they took a portion of one statement and stitched it together with a portion of another statement to create a new statement,” he said.

With reference to the comments on Kevita and Health-Ade, Dave seemed to dispute those attributions as well. “I am so conscientious and cognizant of making sure that I never ever speak disparagingly about another brand, whether it’s kombucha or another category,” he said. However, he later added: “In the article there were inadvertent quotes that reference other brands, that was not something that was intended. If that could be done all over again, I would ask for that to have been excluded [from the story].”

He also insisted that the “three hipsters” reference was not targeted at any particular brand, and also seemed to dispute the veracity of the quote altogether.

The article, despite Dave’s issues with certain aspects, has still generated an overall positive response, he told BevNET. He said he has received compliments from colleagues in the industry for highlighting his “entrepreneurial, independent spirit” in a publication that primarily covers large corporations. “The majority of people who have come to me from the industry and outside of it have said they don’t think my passion was a negative thing and that it was more inspirational,” he said.

Moving forward, Dave said the experience wouldn’t dissuade him from engaging further with the public, but that he may seek other avenues outside of traditional media to do so. He said he’s learning that his personal story resonates with others, and that he will continue to take advantage of opportunities to control his narrative.

“I don’t think trolling on LinkedIn or social media is a solution,” he said. “I do think that if there’s an environment or a platform, whether it’s mine or someone else’s that I’m utilizing to share my story in an unfiltered, unedited, uncontrived fashion so you can see me for who I am — the good and the bad, the weak and the strong — then that would be an environment [in which] I feel I would really excel.”

Despite disagreeing with certain aspects of the Forbes story, Trout was adamant that the matter was closed as far as she is concerned. She also had praise for Dave and his pioneering of kombucha as a category.

“Eleven years prior to our first bottle [being sold], he had already been working on building this and had done enough work to get him national distribution, so I have a lot of respect for the guy,” she said.

As Trout sees it, the article wasn’t all bad news.

“I was somewhat happy to be called a hipster,” she said.