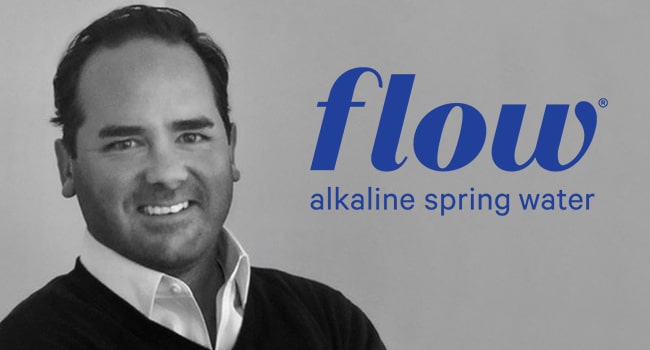 Flow Alkaline Spring Water announced today the appointment of Tim Dwyer, a 10-year veteran of Vita Coco who most recently served as that company’s VP of sales, as chief revenue officer.

Speaking with BevNET, Dwyer said he sees “the same potential” in Flow that he saw in coconut water a decade ago, noting that the brand’s disruptive approach to the bottled water category motivated him to take the role.

“There is an opportunity to do something big here,” Dwyer told BevNET. “I like future-thinking, visionary leaders and brands that like to disrupt…. At Flow, we’re going to go out and disrupt some of the staple brands that have been in the marketplace for a long time and we’re going to challenge consumers to think about the choices they make.”

Dwyer joined Vita Coco in 2009 as a VP and general manager for its East Coast business. In February 2016, he became the company’s VP of sales, managing the brand’s global business. Prior to Vita Coco, he has held sales management roles at PepsiCo and Red Bull.

Dwyer added that he believes Flow’s use of a Tetra Pak container gives it an advantage in the bottled water category as retailers and consumers demand more sustainable alternatives to PET bottles. Vita Coco’s parent company All Market Inc. itself joined the eco-friendly water movement earlier this year with the launch of Ever & Ever.

“People want natural ingredients, they care about the quality of liquid, and they’re looking to do something that’s more sustainable,” Dwyer said. “Retailers are asking for more choices, consumers want more choices, and Flow gives unique opportunity to scale this and be one of the leaders in this space.”

Founded in 2014, Flow is a naturally alkaline bottled water brand which is currently available in more than 13,000 locations in North America. Founder and CEO Nicholas Reichenbach told BevNET that by the end of this year the company is projected to add more than 7,000 additional locations and to sell more than 50 million units. In July, Flow opened a $15.5 million, 55,000 square foot manufacturing facility in Virginia to facilitate its expansion.

Dwyer’s addition comes as the company also prepares to launch new functional SKUs, Reichenbach noted, beginning with Flow Glow — a CBD-infused water which will launch in Canada this year and in the U.S. in February.

According to Reichenbach, Dwyer will focus on expanding Flow’s distribution into new channels, including convenience, specialty, and food service.

“Millions of our customers in the U.S. are walking to the 7-Eleven or other convenience stores and gas stations, but they’re not finding our products,” Reichenbach said. “Tim’s modus operandi is to really build that distribution out, get meaningful customer traction within our core market, and also expand it to the consumers who want to be a part of the wellness ecosystem.”