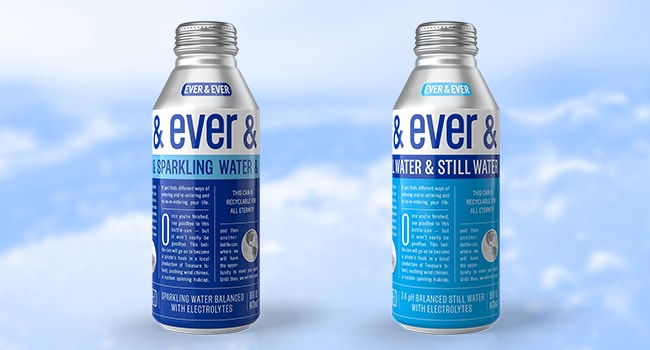 Every bottle counts; at least that’s the idea behind Ever & Ever, a new line of purified water packaged in resealable 16 oz. aluminum bottles. Launched by Vita Coco parent company All Market, the product is now available in still and sparkling varieties at select retailers in New York City — via distribution by Big Geyser — on Amazon and at drinkeverandever.com for a suggested retail price of $1.99 per bottle or $23.99 for a 12-pack.

The launch of Ever & Ever comes as public concern over plastic waste, particularly from single-use products such as straws and bottles, has grown in recent years. According to market research group Euromonitor, 500 billion plastic bottles are used around the globe each year. In response, brands in the category have adopted various changes — from committing to using recycled plastic to selling water in paper cartons — and, in recent months, the movement behind aluminum packaging in particular seems to have accelerated.

Startup brand Liquid Death, which offers to “murder your thirst” with 16.9 oz. aluminum cans of mountain water, has attracted outsized media attention thanks to its snarky branding, but also has raised $1.6 million in seed funding. Meanwhile, Pathwater, which markets its thicker aluminum bottles as both reusable and recyclable, is currently in over 4,000 stores nationwide. Even actor Jason Momoa, better known to audiences worldwide as big screen comic book hero Aquaman, is launching his owned canned water line called Mananalu.

Ever & Ever joins Vita Coco as the first non-coconut beverage brand launched by All Market, which was founded in 2003. The company also acquired natural energy brand Runa last June.

All Market CEO Mike Kirban told BevNET last week that focusing on sustainability and combating plastic waste gave the company an opportunity to break into an extremely competitive water set with a unique offering based primarily on packaging rather than sourcing.

“Based on volume alone, water is a segment of the better for you refreshment category we’ve wanted to play in,” he said. “However, we knew, we’d never win on price and for us to go source a new water from some faraway place just didn’t feel right. Giving consumers who are concerned about the environment a new option from a packaging standpoint just makes so much sense.”

The concept sprung from All Market’s work with Lonely Whale, an agency that works on campaigns tied to ocean health advocacy. The two companies had been working over the past year to develop a long-term sustainability strategy for All Market centered around neutralizing the impact of single-use packaging, according to Jane Prior, executive vice president of global brand for All Market.

“Through the partnership, we identified there was an opportunity to give consumers a more sustainable option in the water category,” she said. “And, we knew we had to get a product to market quickly because the movement was coming.”

The widemouth, resealable 16 oz. Alumi Tek bottle, created by Ball, is intentionally designed for consumers on-the-go, and not necessarily for bulk ordering to home or office accounts; however, Kirban said the brand is exploring other package sizes. He noted the brand and concept was created to complement, rather than replace, the reusable water bottles many people may already use everyday.

“We see that consumers more and more are moving to reusable water bottles,” he said. “I believe that a reusable bottle is an ideal option, but you can’t always do that when you’re at the airport, at a c-store, or on the run. This gives those consumers another option.”

To promote the launch of Ever & Ever, All Market is teaming with Lonely Whale on the Museum of Plastic, an interactive pop-up installation in New York City mean to inspire positive environmental change. The Museum opens to the public on June 8.

“Single-use plastic waste is a big issue that needs to be addressed either through a massive innovation in plastic recycling, which isn’t coming fast enough, or by consumers moving to more sustainable and recyclable options,” said Kirban. “Change really happens with a moment! Anyone who’s watched the news over the past several months can’t help but notice that a moment is brewing.”

The launch comes as Keurig Dr Pepper, which distributes Vita Coco as an allied brand, unveiled its “Drink Well. Do Good.” corporate responsibility platform earlier this week. Designed to create a positive impact in four areas — environment, supply chain, health and wellbeing, and communities — the commitment to sustainability includes benchmark goals such as converting to 100% recyclable or compostable packaging and to obtain 100% of electricity from renewable sources both by 2025.