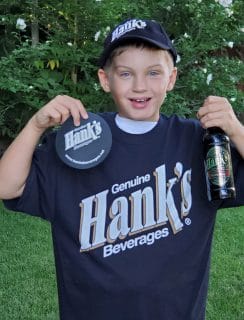 PHILADELPHIA– It was one of the feel-good stories of the summer, the saga of  an 11-year old boy who advertised he was selling “ice cold beer” at his roadside stand, attracting the attention of the local police and high-profile global media like USA Today, CNN and The UK Independent.  The “beer” sold at little Seth Parker’s humble stand at his family home in Brigham City, Utah wasn’t the alcoholic kind, but his favorite summer beer, ice cold root beer!

Now the kid who made international headlines with his clever marketing gambit is getting a push that will make his little business even bigger and sweeter.  He is about to become the newest distributor of one of America’s most popular craft sodas, acclaimed Hank’s Gourmet Root Beer.

Hank’s Gourmet Root Beer was one of the first brands to kick off the craft soda boom when it was introduced nationally in 1995. Made with high quality ingredients including pure cane sugar in Philadelphia, the birthplace of root beer, it has become a favorite of hip gourmet food devotees, chefs, bartenders, restaurateurs, soda fanatics as well as critics at prestigious media outlets like Eater, Grub Street and the Los Angeles Times. Today it anchors a craft soda product line that now includes Diet Root Beer, Orange Cream, Vanilla Cream, Wishniak Black Cherry, Birch Beer and Grape, available in upscale restaurants, bars, gourmet and specialty stores and via online sales to the booming, nationwide audience of craft soda lovers.

“When we saw Seth’s story, we were struck by both his work ethic and, of course, his ingenious marketing,” begin Tony Salvatore, Partner and Chief Customer Officer of Hank’s Gourmet Beverages.  “We’re a third-generation family business.  Our whole family grew up in the beverage business, working from the time we were around Seth’s age.  Naturally, we wanted to do anything and everything we could do to give a hand to a hard-working kid.  We also wanted him to be selling the best brand, so we quickly donated a supply which he will begin selling at a big event Labor Day.”

In recent years, Tony Salvatore has taken a major role working with distributors to speed Hank’s expansion, especially in Western U.S. markets.  Clever sales promotions like Hank’s Celebration of National Cheesesteak Day have brought excitement for the brand at restaurants and retailers in the company’s wide sales network.

Salvatore continues: “Though he is our smallest, youngest and, most likely, shortest distributor, Seth is just as important as the big guys to us.”

“We’re delighted that Hank’s reached out to us,” adds Alexis Parker.  “As you can imagine, Seth is a real root beer devotee and, I have to confess, Hank’s is his new favorite brand.”

Seth debuted his association with Hank’s Gourmet Root Beer near the site of one of Brigham City’s most annual popular events since 1904, The Peach Days Festival.  Held September 6 – 7 in Brigham City’s downtown district, the event drew over 35,000 attendees, including many who stopped by Seth’s humble root beer stand.

For more details about individual Hank’s accounts and retailers in your area or more info: hanksbeverages.net