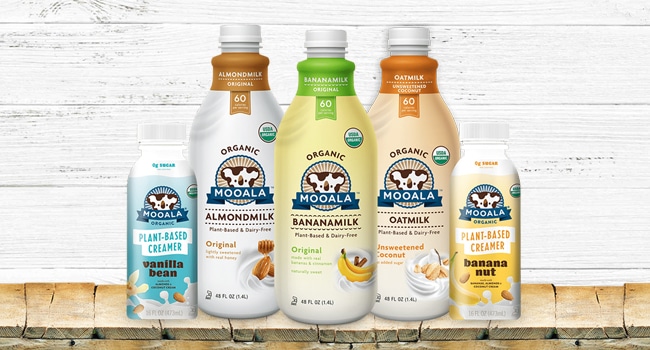 Plant-based dairy maker Mooala announced today it has raised $8.3 million in a Series A financing round led by Sweat Equities. The round brings the three-year-old brand’s total funding to more than $13 million.

Speaking with BevNET, Mooala founder and CEO Jeff Richards said the round will provide working capital for the Texas-based brand to expand its retail footprint to more than 3,500 stores nationwide in January. The company, which launched in 2016 with multiserve banana and almond milk products, has recently added oat milk and a line of plant-based creamers while growing in the natural and grocery channels with retailers such as H-E-B, Central Market, Southeastern Grocers, The Fresh Market and Lucky’s.

“We’ve been growing not just in store count, but in our product offering — we now have nine SKUs as opposed to just three this time a couple years ago,” Richards said. “It’s been really fun to have success with new products and new stores, so I’d say this round is about supporting those new stores, which are going to be the main users of this cash.”

The round also includes additional financing from M3 Ventures, which led Mooala’s $5 million seed round last year. Sweat Equities was also a small investor in that prior round, Richards said, but now the firm will play a more hands-on role in guiding Mooala’s growth.

“[Sweat] helped grow Earthbound Farms from a small business into a large company that was acquired by Whitewave a few years ago, so he’s very familiar with perishable products and has a lot of contacts both on the retailer and on the supply chain side,” Richards said. “He’s a really good partner for us at this stage in our growth because he kind of knows what helps companies to take the next step, so we’re super pumped to have him be more involved.”

Although Richards noted that Mooala has seen strong velocities which have allowed it to “go toe to toe with giants” in the plant-based milk category, the company is still small with only five full time employees. While there are no immediate hiring plans, Richards said the financing will allow the company to make “opportunistic hires” over the next year. He noted that he has considered bringing on c-suite roles, such as a chief operating officer and a finance lead, but has not yet made definite plans to create those positions.

While most of Mooala’s retail expansion will focus on the grocery and natural channels, Richards said he also plans to add an ecommerce arm. The company has developed new packaging for online sales, he said, and may explore opportunities in the food service channel.

The company also plans to launch single-serve products next year. According to Richards, Mooala had been developing the line last year, but put it on hold in order to launch plant-based creamers at Natural Products Expo West 2019 in March.

“When we launched the organic, plant-based creamers it was kind of a market validation for what we’re doing with our affordable, organic plant-based [approach],” he said. “It’s a really competitive space and for us to be able to penetrate and have strong velocity for the creamers has been really edifying for the brand and prove that we can go do things besides just multiserve plant-based milk.”