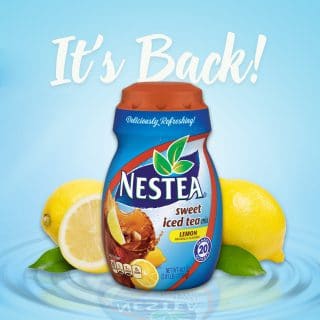 DENVER– New Age Beverages Corporation, the Colorado-based organic and natural products company, has announced the expansion of their partnership with Nestle, including the broadening of their license agreement on NESTEA to now include all products under the brand, including NESTEA Powdered Tea products in the United States. As a result, New Age is launching NESTEA Powders immediately in its e-commerce system, targeting its current database of more than 1,000,000 consumers, and with major retailers through the United States.

NESTEA Powdered Tea has historically generated sales at retail of more than $30 million. The Coca-Cola Company used to own the NESTEA license for ready-to-drink beverages, the same license New Age now has within the U.S. Both NESTEA ready-to-drink and powdered teas have a large base of passionate, loyal consumers across the country with brand awareness of 89%, the largest of any brand in New Age’s portfolio.

According to Nielsen, the powdered tea segment in the United States is valued at $259 million for the latest 52-week period. New Age intends to capture a significant share of the market, leveraging NESTEA’s awareness and consumer loyalty, and will make the brand available through its own direct-store-distribution system, its network of distributor partners throughout the U.S., and its footprint with major retailers throughout the country.

New Age has re-introduced some of NESTEA Powders’ most popular flavors on its e-commerce platform this week at (newage.com), and is expanding the range of Nestea Powdered products; including new innovative flavors and recipes at retail, e-tail and through its own e-commerce platform.

Olivier Sonnois, President for North America for New Age, commented: “While we are relaunching an innovative natural and organic NESTEA ready-to-drink assortment across America’s largest retailers (nestea.com), we are equally as excited to now add our innovation and distribution expertise to the NESTEA powdered portfolio. We are thrilled to have the opportunity to manage the entire Nestea brand in the United States, and are committed to making it a sizable business for both Nestlé and New Age. We are working closely with NESTEA’s global procurement team on maintaining the highest product quality standards and operating procedures, while we focus at New Age on fulfilling the latent demand. We have already received thousands of consumer inquiries about NESTEA Powders from loyal consumers, and look forward to expanding this legendary brand across the U.S.”

New Age is a Colorado-based healthy products company dedicated to inspiring and educating consumers to “live healthy.” The Company is the only omni-channel company with access to traditional retail, e-commerce, direct-to-consumer, and medical channels across 60 countries around the world. New Age is also the only one-stop-shop of healthy beverages and includes the brands Nestea, Illy Coffee, Volvic, Evian, Tahitian Noni, TeMana, Búcha Live Kombucha, Marley, and others. New Age competes in the growth segments of the >$1 trillion-dollar non-alcoholic beverage industry and has become one of the 40 largest non-alcoholic beverage companies, one of the largest healthy beverage companies, and the fastest growing in the world over the past three years. The Company operates the websites newagebev.com, bwrgroup.com, morinda.com, mybucha.com, xingtea.com, drinkmarley.com, nhancedcbd.com, and cocolibre.com. New Age has exclusively partnered with the world’s 5th largest water charity, WATERisLIFE, to end the world water crisis with the most innovative technologies available. Donate at WATERisLIFE.com to help us #EnditToday.