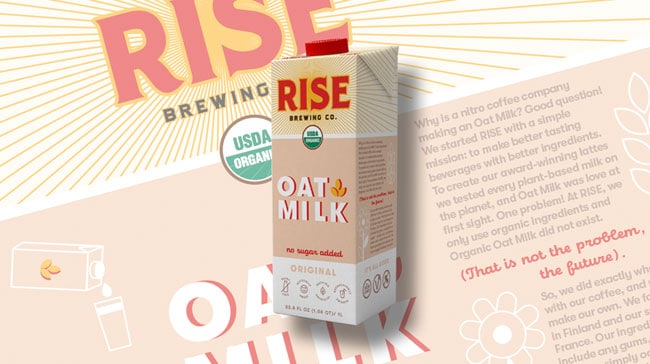 Having watched as oat milk fueled its successful recent round of coffee innovation, Rise Brewing Co. is betting the increasingly popular ingredient can work just as well on its own.

The New York City-based coffee company began producing its own supply of organic oat milk last year, for use in its both its retail cafes and in a three-SKU line of nitrogen-infused cold brew lattes. (Those lattes earned a BevNET Award for Best New Product in 2018.) This Thursday, Rise will debut its oat milk as a standalone product at Natural Products Expo West 2019 and begin offering it for sale through its website in one liter Tetra Pak cartons for a suggested retail price of $5.99 and $29.99 for a 6-pack. The product will roll out at retail through Rise’s existing distribution partners, including Columbia in the Pacific Northwest and Hensley Beverage Company in Arizona.

“We always considered this as separate product, but our focus wanted to remain on coffee product initially,” said Rise co-founder and CEO Grant Gyesky. “As we saw some of the new players coming to market with oat milk, we saw a similar opening for a better-for-you organic alternative. It just kept being put in front of our face that this is something we should do.”

The move puts Rise in the middle of one of the fastest-growing and most competitive segments of the plant-based dairy space. Over the past year, brands such as Califia Farms, Quaker, Hood, Mooala and Elmhurst have launched oat milk products to capitalize on rising consumer demand and attempt to seize market share from the leading brand, Oatly.

In addition to allowing for greater production control, Rise co-founder Jarrett McGovern said that making oat milk with four simple ingredients — organic sunflower seeds from France, organic oats from Finland, water and sea salt — has allowed the company to circumvent sourcing issues that could lead to shortages, as Oatly has experienced at times.

“One of the results of us doing all the sourcing and building oat milk from scratch and not buying from supplier or another brand is that we’ve tapped into farms and sources that aren’t necessarily yet being taxed by the current oat milk market,” he said.

Within the growing category, McGovern said his brand’s product would stand out for its clean formulation, texture and taste. Much of that consumer interest in oat milk has been generated from its popularity as a coffee creamer; McGovern said that 70 percent of customers at Rise cafes drink dairy-free coffee drinks, with a majority of that being oat milk. Yet, after internal discussions, the company opted not to position its version as a barista-focused product.

“My initial direction was to tie this close to coffee, because we are a coffee company,” said Gyesky. “Jarrett kept rebutting me by saying ‘But I’m having it in my cereal.’ He convinced the team that it’s not just a product meant for coffee; it’s a better coffee alternative across the board.”

“This is the best dairy free milk I’ve ever had,” McGovern added. “For us, by staying a barista blend, it could have potentially limited us.”

Indeed, as Rise has grown, the brand has found itself pushing past those limits; starting from a single nitro-infused black coffee, Rise now markets six varieties, including its oat milk lattes, a dairy milk latte and two citrus-infused cold brew flavors. Though McGovern said the company will remain dedicated to coffee, he noted that each round of innovation has given Rise confidence in its ability to go further.

“We want something innovative, better than anything else on shelf, uses the best ingredients and is organic. Applying those filters towards development has allowed us to be successful with products we maybe wouldn’t think we could do in the past,” he said. “We are coffee focused, but we like to be innovative and develop solutions in beverage that are better tasting and better for you.”