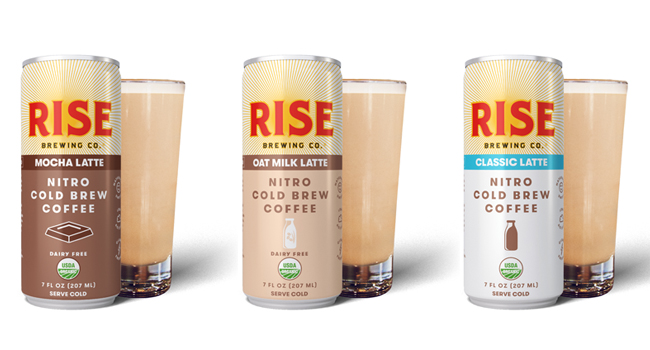 With the announcement of its new three-SKU line of nitrogen-infused cold brew lattes, RISE Brewing Co. is aiming to bring one of the hottest trends in coffee out from behind the espresso bar and into shelf-stable RTD coffee category.

In two of its latte SKUs, RISE will feature oat milk, which has been thus-far rarely integrated into RTD coffee products even as its popularity with baristas has been steadily increasing in recent years. One of oat milk’s most prominent players — Sweden-based brand Oatly — is currently available at over 1,000 coffee shops in the U.S., where its ‘barista blend’ is valued for its consistency and ease of use in creating latte art. According to an article in Bloomberg, about 13 percent of drinks ordered at third-wave coffee chain Intelligentsia, which has 11 locations nationwide, are made with oat milk. As overall interest in plant-based food and beverages has increased, other brands, such as Elmhurst Dairy and Pacific Foods, have also recently launched oat milk products.

Speaking with BevNET earlier this week, RISE co-founder Jarrett McGovern said that customers at the company’s cafes around Manhattan echoed those trends. “We are using oat milk [in the lattes] because that’s what we see in our cafes; in terms of the percentage breakdown of RISE drinkers that drink lattes, about 50 percent drink non-dairy [lattes],” he said. “We wanted to make sure that we were listening to our community.”

Co-founder and CEO Grant Gyesky added that he discovered oat milk as a pairing for cold brew while visiting a coffee shop in Barcelona. He praised its superior taste and consistency in coffee relative to other plant-based milks, and also for being safe for customers with nut allergies. Having decided on an alt-milk for its lattes, the challenge was creating a shelf-stable product with 100 percent organic ingredients.

“Milk and coffee are not supposed to stay together — they separate,” he said. “To find organic ingredients that will help keep coffee and milk together over 18 months [shelf life] was challenging but it was worth it in the end.”

While brands like Califia, Starbucks and Peet’s have given almond milk a prominent role in their respective RTD coffee products, Gyesky said that rather than building solely around oat milk, RISE wanted to take a more natural stance with the inclusion of a ‘classic’ latte flavor made with organic whole milk.

“We consider ourselves coffee experts, not coffee snobs,” he said. “We didn’t necessarily want to peg ourselves as a coffee company that sort of tells people that they should or should not be drinking dairy. We wanted to have an alternative that spoke to every coffee drinker out there, so we decided to go dairy and alt-dairy.”

The brand did, however, take a stand on calories.

“It was really a goal of ours from the beginning that we didn’t want to produce something above 150 calories per can,” Gyesky said. Finding the balance between the ingredients took six to nine months of fine tuning, he said, but the goal was eventually reached: Mocha tops the list at 150 calories per can, followed by the oat milk latte (130 calories) and the dairy latte (125 calories). 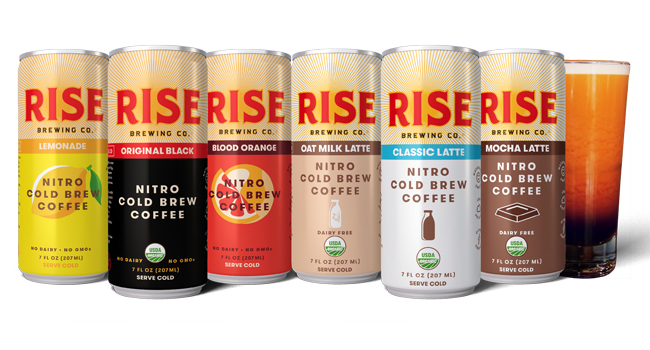 The new lattes will also help grow a brand which launched its first innovations last year around citrus: nitro-infused cold brews blended with either lemonade or blood orange juice. RISE COO Melissa Kalimov noted that the “classic” and familiar latte flavors would help round out the brand’s offerings and balance out the “more cutting edge innovative side” seen in the citrus flavors. With extensions grouped into either Latte, Classic (the single original black SKU) or Citrus, Kalimov said RISE has an opportunity to build a brand banner on-shelf.

The lattes, slated to launch late this year, will be available through RISE’s website, as well as in the Tri-State Area (New York-New Jersey-Connecticut) and in the Pacific Northwest, where it will be serviced by Columbia Distributing. Before the products roll out in 7 oz. slim cans, however, McGovern said they will be available on tap at the company’s cafes.

RISE is supporting the launch through a Kickstarter crowdfunding campaign, which Ryan Williams, senior manager for finance and special projects at the company, said was aimed at offering early access and special discounts to fans of the brand. Rewards range from stickers and can koozies to a 12-pack case of lattes to a discounted rate on a monthly subscription plan.

“When we launched our RTD cans, I think we were lucky to have already built a community,” said Williams. “Kickstarter helps us to connect with customers willing to engage with something that keeps us on the cutting edge.”