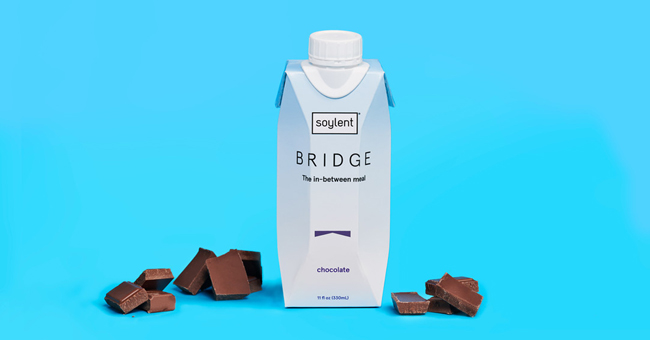 Meal replacement maker Soylent’s natural use occasion is clear: three meals a day, three reasons to purchase a Soylent. Now as the brand moves into the mainstream retail environment, the company is creating new use occasions for its growing consumer base with Soylent Bridge, a new low calorie snacking line

The Los Angeles based meal replacement brand launched Bridge today as an online exclusive and it is available in 12-packs for $26, or at a discounted subscription rate of $24.70. The single SKU, Chocolate, contains 180 calories, 15 g of plant-based protein and 3 g of sugar in each 11 oz. Tetra Pak carton.

“It’s only available on Soylent.com to start and that gives access to our core customer base and then obviously we’ll continue to do what we do here at Soylent, which is listen,” Crowley told BevNET. “We want to hear directly from our customers what they’re loving about Bridge and, assuming it’s successful and that it’s working into people’s lifestyle, we’ll start to look into expanding beyond just our website.”

Crowley noted that the line’s January 2 date was deliberately tailored to consumers’ New Year’s resolutions, giving dieting customers a way to have fewer calories throughout the day and cut down on unhealthy snacking. Bridge was in part inspired in response to consumer requests for a low calorie alternative to the main 400 calorie Soylent line, he added.

The launch comes as Soylent continues to expand its retail presence. Since launching in 18 7-Eleven stores in 2017, the brand ended 2018 with more than 13,000 doors, including Target, Meijer, and Walmart. In Walmart, Crowley said, the brand has already expanded from its initial launch in 450 stores to more than 1,800 locations nationwide with potential to add more later this year. He said the brand has seen high velocities and retail partners have been open to working with Soylent to find the best shelf placement.

“We do great in the health and nutrition aisles, ambient, breakfast and the center of the store,” Crowley said. “But our real goal, our real strategy is that we work extremely well when we get in the grab-and-go. Grocery grab-and-go is one of our core focus channels.” 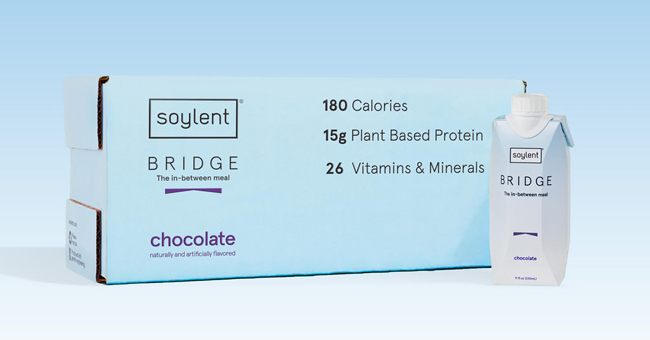 The company has also shifted its marketing strategy to reach more mainstream consumers, releasing advertisements directed at millennials. In New York, the brand launched a commuter campaign on the city’s subways pitching the brand as an in-transit meal. Soylent also worked with its New York metro area distributor Big Geyser on a program that donates one bottle of Soylent to a local food bank for each bottle purchased.

“It’s important that we actually feel local,” he said. “We’re a L.A.-based company and people feel that we’re this Silicon Valley, tech and science brand. So when you go into a community, they need to feel you’re really a part of the community.”

The company also ended 2018 by naming the winners of its Soylent Innovation Lab Awards. Soylent announced in October the opening of a co-working space in its Los Angeles office for similarly minded food tech startups. The company awarded a year of free co-working space and a $15,000 cash grant to Journey Foods, a company creating producing fruit snacks made with functional ingredients. Runners up included healthy snack and meal company Stacey & Mom and In-House Produce, which helps restaurants to grow their own hydroponic vegetables on site. Each runner up received $5,000 in cash grants and a year of free co-working space.

“This is all about building a community,” Crowley told BevNET. “We’re not taking any ownership in these companies, we’re here for the community to benefit. My vision for this was for my team to get the benefit of being able to work with all these young entrepreneurs who are really trying to change the world with food, technology, and science, as well as expanding our not-for-profit side, which is such a big part of our mission.”