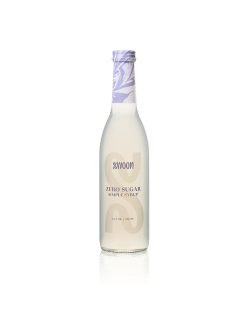 NEW YORK– On average, Americans consume around 82 grams of added sugar per day, which is over double the amount recommended by the American Heart Association (AHA), and most of that is in the beverages that we drink. Now, there’s no need to sacrifice the quality of beverages with the launch of Swoon, the first-of-its-kind liquid sugar substitute that gets its natural silky sweetness from monk fruit. Swoon tastes, behaves, and feels like sugar in terms of sweetness, viscosity, and mouthfeel, but without the flaws. A revolutionary newcomer in the culinary and beverage world, Swoon lets everyone, whether sugar-free or breaking the sugar habit, enjoy the drinks they love without compromise.

Founders Jennifer Ross, who has suffered from Type 1 Diabetes since she was a kid, and good friend Cristina Ros Blankfein are on a mission to take down sugar and make the sweetness of it accessible and approachable for everyone, everywhere, in every sip.

“We use monk fruit, a naturally sweet melon native to Southeast Asia handpicked from vines and high in antioxidants, because not only is it zero calories, but it’s also naturally sweet and doesn’t raise blood glucose levels,” said Swoon co-founder Jen Ross. “We wanted to come up with a product that had zero sugar and zero calories but was still natural – without having to settle for artificial sweeteners like aspartame or sugar alcohols, which can sometimes be difficult to digest.”

Swoon is the only zero sugar simple syrup with monk fruit on the market without sugar alcohols, so bloating and digestion issues are few and far between. Swoon is an easy 1:1 replacement for sugar, simple syrup, honey and agave in everything from coffee and tea to cocktails and lemonade. One teaspoon of Swoon is the same sweetness as one sugar packet. The brand has tested Swoon with bartenders (e.g., at Catch and Eleven Madison Park), baristas (e.g., at Bluestone Lane and Café Clover), and nutritionists to formulate the perfect liquid sugar substitute.

“So many sugar substitutes come in a granulated form, which results in lots of frantic stirring to dissolve it,” said Swoon co-founder Cristina Ros Blankfein. “We’ve completely eliminated that aspect, so that your drinks have a consistent taste profile and tastes the same from first to last sip.”

“I always have customers that come into Catch looking for delicious cocktails that don’t have any sugar,” said Lucas Robinson, Beverage Director of Catch. “In the past, those two never went hand in hand but Swoon has changed that. I’m excited to have Swoon as an option behind our bar.”

“Swoon is easy to add to almost any recipe and has a balanced and lightly sweet taste. A lot of stevia and monk fruit that I’ve tried can have a strong aftertaste or are too potent. Swoon has just the right amount of sweetness with no bad aftertaste,” said Matchaful CEO Hannah Habes.

Swoon is the first zero sugar simple syrup that gets its natural silky sweetness from monk fruit. Founded by Jennifer Ross and Cristina Ros Blankfein, Swoon tastes, behaves, and feels like sugar in terms of sweetness, viscosity, and mouthfeel but without the flaws. Because it is a simple syrup, not granular, it integrates seamlessly into any beverage and creates a consistent taste profile. Swap sugar for Swoon’s liquid sweetness in everything from iced coffee and tea to cocktails and lemonade. Keto-friendly, paleo-friendly, gluten-free, and vegan, Swoon is available for shipping nationwide on tasteswoon.com (3 bottles/$24 MSRP) and Amazon (1 bottle/$11.99) and served in notable spots in New York City, Los Angeles, and bicoastal spots.